Driver Struggles To Save 2-Year-Old Who Had Multiple Brain Surgeries | Milaap
This campaign has stopped and can no longer accept donations. 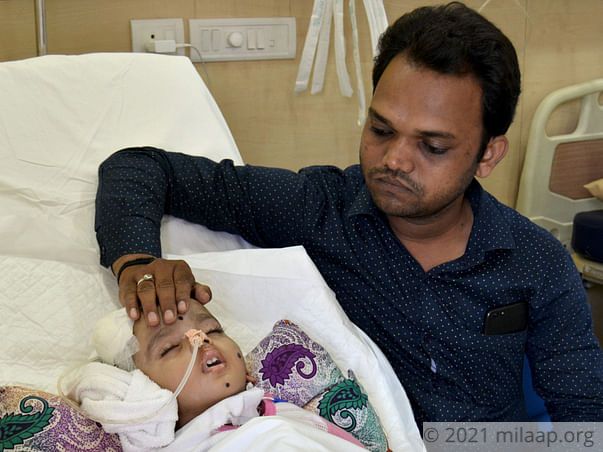 “It has been months since I last saw my son smile or talk. Watching him lie almost lifeless, with multiple tubes running through his mouth and face, takes my mind back to those happy times when he was healthy and energetic. He used to eat an egg every day, but now he can barely swallow fluids. I call out to him when he opens his eyes, but he does not respond. However, I see tears trickling down his face sometimes.”-Ismail Shaikh, father of 2-year-old Mohammed Anas.

On 17th March this year, Mohammed Anas had woken up at 6 am as usual to eat biscuits when he developed dangerous convulsions. He was admitted to the hospital immediately, where he was found to have a brain blockage. From then, he has been in the hospital, fighting for every breath. When he turned 2 in August this year, he was unconscious and in the company of nurses and doctors, instead of his friends. Being a poor cab driver based in Mumbai, his father Ismail Shaikh has struggled to keep him alive for this long and cannot afford to continue his beloved son’s treatment.

Anas, before he got sick

On that fateful day, Anas had a fits attack for almost an hour. His eyes rolled up and his mouth was frothing. He was taken in for an urgent surgery as the water pipes in his brain had become blocked, putting immense pressure on the brain. His heart was weak and his breathing was severely compromised. When he became unresponsive, Ismail and Tasleen (mother) felt for a moment that they had lost their son forever, but they were able to get him to the hospital on time. From then, Anas has undergone 3 major brain surgeries in total, fighting to overcome one complication after the other.

“I drove dangerously fast through the traffic to get him to the hospital on time. We thought he had gone when he stopped moving all of a sudden. But thankfully, he held on and was rushed to the ventilator. Even a minute’s delay would have cost my son’s life. I cannot believe how such a small baby was able to withstand the stress of so many surgeries; my son is a fighter.”-Ismail Shaikh.

He was even found to have a congenital blood disease (that was undiagnosed till then) called glanzmann thrombasthenia, where enough chemicals are not produced in the platelets to cause efficient clotting. This made his surgeries even more complicated as doctors had to control uncontrollable bleeding during all the procedures.

“I remember only one occasion in the past where he hurt his nose and the bleeding just refused to stop for hours. My wife and I didn’t think much of it then. It is scary to think that our son had a blood disease all the while we perceived him as being ‘normal’ and healthy.”-Ismail Shaikh.

After spending every paisa he borrowed, Ismail Shaikh has no more doors left to knock for help now

Ismail Shaikh used to earn Rs 15,000 a month driving his friend’s cab before Anas fell terribly sick. From then onwards, he has not been able to go to work regularly like before and therefore makes lesser money now. He kept borrowing from friends and family to pay off a portion of hospital bills till now, but all that money is exhausted now. His wife, Tasleen, recently gave birth to a baby boy, and his expenses have doubled now. Ismail just wants to see his son come back to life so that he can meet his baby brother, and they can all live together as a happy family – just like before.

Ismail longs to cuddle his baby boy again, but cannot afford to save him

Baby Mohammed Anas is slowly recovering from brain damage and needs prolonged hospitalization to survive. Due to his blood disease, he needs frequent transfusions for his condition to stabilize. Though he is off the ventilator, he needs a couple of weeks more in the ICU to completely recover. With added responsibilities (now that he is a new father) and an unstable income, Ismail is struggling to save his son. 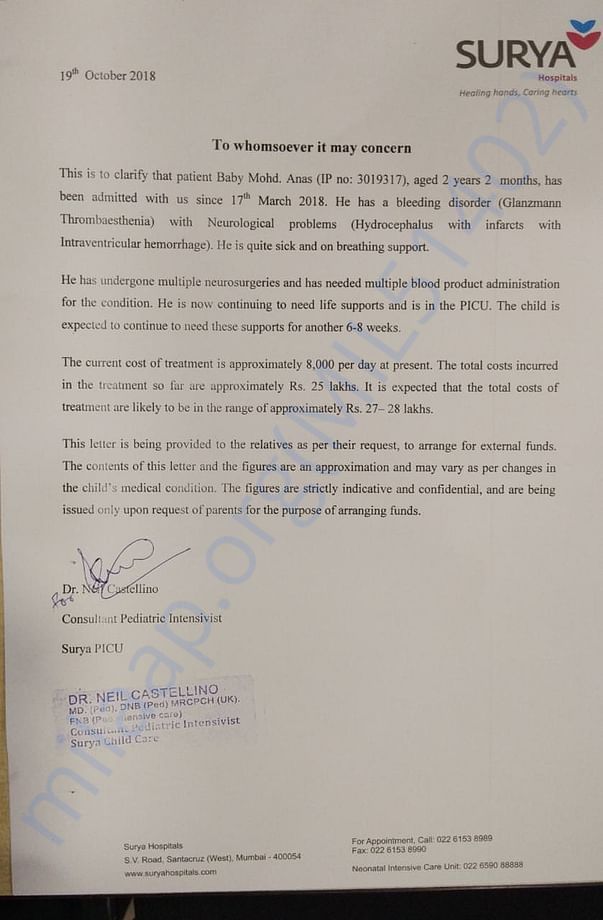 Anas was discharged but we had to admit him again as he has developed an infection. He is receiving medication. He is having a problem digesting milk and water. His liver is also swollen. He also has rashes all over his body.

The doctor will conduct a check up and let us know what the future course of treatment will be.

Do keep him in your prayers.

Scan & donate with any app
check_circle_outline Download payment receipt
Report fundraiser
Know someone in need of funds for a medical emergency? Refer to us
Rs.137,664 raised

89 Supporters expand_more
This campaign has stopped and can no longer accept donations.
$150 Million +
Raised on Milaap
Are you in need of financial support for medical or personal emergencies, or a social cause?
Start a fundraiser
Or
Know someone in need of funds for a medical emergency? Refer to us
Campaign organizer contact_mail
R
Riddhi
Beneficiary: Mohd Anas Shaikh info_outline

Hope he will be recovered soon...Tc

Hope he will be recovered soon...Tc 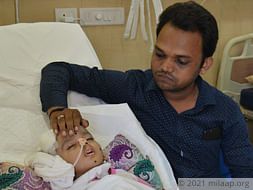