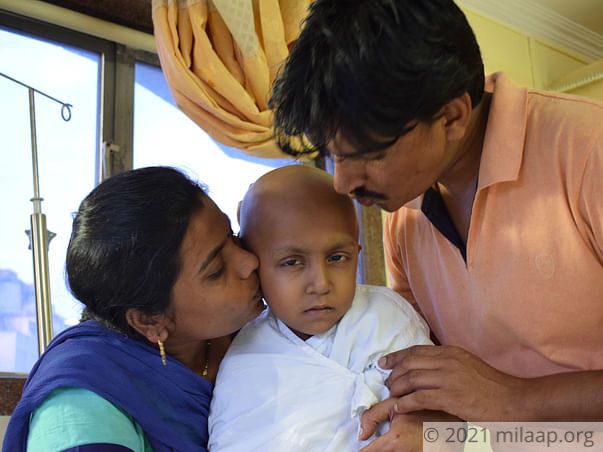 “My 5-year-old son, Mayank had a habit of questioning everything around him. From how a dish is made to how a bike runs, he never failed to express his curiosity. But now, when he lies in the hospital bed and undergoes chemotherapy, his questions leave me numb. He wants me to explain to him what happens when cancer attacks the body, when is he going to die, and why he is in so much pain. I wish we never had to face such questions.” - Pankaj, Mayank’s father.

Mayank has beat cancer once, but this time it is even deadlier for him now

Little Mayank suffered from a terrible fever 8 months ago. But what worried Pankaj and Rushali was their son’s swollen stomach. When they took him to the doctors, they started treating him for stomach infections. But Mayank’s pain got worse. After undergoing tests in different hospitals, Pankaj and Rushali found that Mayank has a rare type of blood cancer called acute mixed phenotype leukemia. This accounts for 2-5% of the total number of acute leukemia. After undergoing chemotherapy for a few months, Mayank's reports showed that he had successfully battled cancer.

In July, little Mayank started suffering from a fever again. The poor parents prayed for it to not be cancer again. But when he was taken to the doctors again,  all their hopes were shattered. Mayank’s cancer had relapsed and it was spreading rapidly. This time it was worse than before. A bone marrow transplant is the only way to save him now.

“My little boy has lost interest in the things that he once loved to do. He used to love reading his books. Now he can hardly keep his eyes open for long. He loved to eat fish so much, but if he eats much he starts to throw up. Cancer has also made him so stubborn and irritable. If we don’t fulfill his demands he begins throwing things and starts crying. Sometimes it becomes so difficult to even handle him. But when I see the pain on his face, all I want is to save him at any cost.”

After being jobless for 8 months, the fisherman has no means to arrange the huge sum required for his son's treatment

Pankaj is a fisherman in a small village in Palghar, Maharashtra. He used other people’s boats to catch fish. His income was never fixed and he would earn around Rs 4000 to 5000 per month. But for the past 8 months, Pankaj has had to stay near the hospital with his cancer-ridden son and hasn’t been able to work. The hospital is far away from his home and hence he can't afford to travel with his sick son. Whenever a relative comes to meet Mayank, they give Pankaj some money. He has to use that money until a relative visits him again. Pankaj is completely dependent on others even for his basic survival now.

The poor fisherman has already spent Rs 2 lakhs to save his son. His relatives have stopped visiting him and he hardly has any money left. He desperately wants to save his son from cancer. But after being jobless for 8 months, he has no means to arrange Rs 15 lakhs for his son’s bone marrow transplant. If little Mayank doesn’t get his transplant soon, he will succumb to his rare cancer.

"I am a matched donor for my son, but the only thing standing in the way is the money. If I fail to arrange the money I will lose my child."

5-year-old Mayank is suffering from a rare type of blood cancer that has relapsed. His fisherman father couldn’t work for 8 months to save him. He has spent everything and borrowed from his relatives. Despite being the confirmed donor for his son, poor Pankaj has no means to arrange the huge sum of money to save his son.