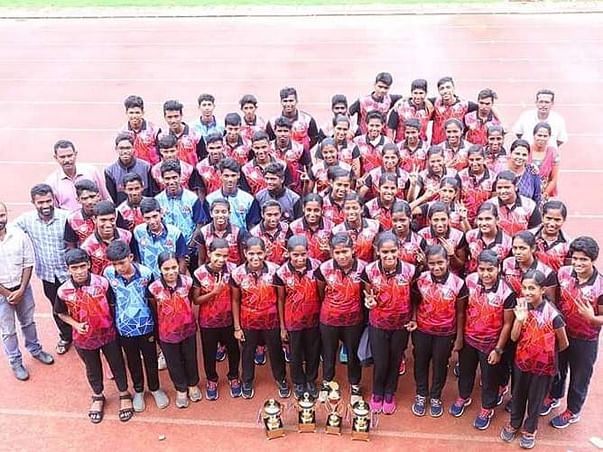 Support Malabar Sports Academy and help India to win a medal in athletics in  Olympics
Today we live in the world of science & Technology and Sports &Games.
Sports & Games has become the treasure of the present generation. It reminds us of the proverb “Where there is a will, there is a way”
Malabar Sports Academy(MSA) launched in the year 2003 had a slow start in the beginning, contended with winning district championships and picking up one or two medals in the state meet. But we didn’t give up the intention of reaching the peak.
Then in the year 2010 there was a magical change. The whole scenario changed when the renowned athletic coach Mr.Tomy Cherian took charge of the proceedings and from then onwards the academy has never turned back and has been able to produce international athletes like Aparna Roy in hurdles and Lizbeth Caroline in triple jump and send them beyond the boundaries of India into the International Arena.
Mr.Tomy Cherian advised us of the proverbs ”Failure is the stepping stone for success” and “Slow and Steady wins the race”
The academy was founded by the team of 32 sports loving persons of Pullurampara, who were later joined by 68 more members from the two nearby Panchayaths. They later joined hands with the PTA and the management of St.Joseph .H.S.S. Pullurampara. The local bodies of the government has greatly supported us with food and wonderful equipments and now it is one of the best equipped coaching centre in Kerala.The centre has produced more than 50 national athletes,32 of them getting placed in the public sector.
In Athletics Mr.Tomy Cherian is assisted by Mr.Sathyan C.K [Hurdles and Jumps], Mr.Joseph John[Long distance, Middle distance and walk events],Mr.Sunil John[Throw events], Mr.Binesh John[Pole Vault] and Mr.Manoj Cherian and Mrs.Jolly Thomas help in bringing the athletes to general fitness.
The academy also has a well-furnished volleyball centre headed by the retired SAI coach Mr.Joseph.T.T and assisted by Mr.Johnson Pullimootil. Mr.Joseph.T.T built an indoor stadium in his own property investing upto 50 lakhs from his earnings and it is a boon for us because now we are running a volleyball girls hostel of 15 members.
Since the last 16 years Malabar Sports Academy has been growing into one of the best sports hub in Malabar area. The expenses are being met by funds raised from the members of the academy and the beneficiaries of the locality and the NRI’s of Pullurampara. Kerala Sports Council is also helping us with Rs.One Lakh each for both athletics and volleyball.
The academy has been rated by Manorama as one of the top 3 Academies in Kerala for the last two years.
St.Joseph’s H.S.S. Pullurampara, where majority of the athletes studied has won the G.V.Raja award and had been placed as the First Runner up in the overall points in the State School Meet held at Pala, Kottayam in 2017.
There are at present 80 students regularly attending the morning and evening training sessions in athletics and 30 students attending in volleyball coaching regularly. Due to the immense pressure of the athletes and their parents outside the locality, we were forced to run a girls hostel for athletics, the residents numbering 24 girls, most of them coming from a very poor family background.
Although the academy has been formed for the physical fitness of an individual and to develop a sports culture in the rural areas of Malabar, we are at present nurturing for a dream of winning a medal in Olympics by our trainees and we have always been very close in connection with all the sports associations & government bodies in our country.
We cheerfully invite you to join hands with us in this great endeavor whole heartedly to fulfill our country’s dreams. Presently we need strong support from the public to meet the following;
In order to perform in world level competitions, the athletes need to practise in synthetic track. Minimum we need a six (6) lane 100m synthetic track and synthetic runways for Long jump, High jump and Pole Vault which will come up to 1 crore for its construction.
Girl’s hostel for Athletes- The expenses of each girl come to One Lakh Rupees yearly. As it is beyond our reach, we are forced to raise 24 Lakh Rupees from the public.
A swimming pool costing 50 lakhs.

Altogether we need to raise 1.75 crores in 12 months. With your help, team MSA intends to facilitate a positive environment for the athletes to develop their skills and train international athletes of whom India will be proud of. We hope them to shine as the shining stars on the sky.

Donate
4 supporters
1%
Raised
Rs.2,600
of Rs.5,000,000
Only INR donations accepted towards this cause
Card, Netbanking, Cheque pickups
Or Donate using