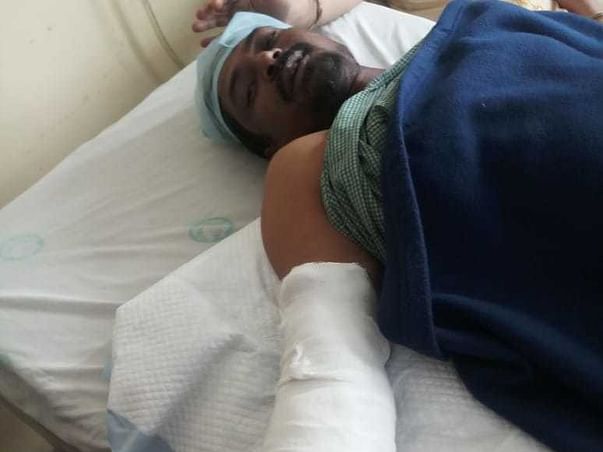 Share
The funds collected from this fundraiser will be used solely for getting prosthetic hand for Mahmood Shaikh.

Brief Information about him

After working and living in Mumbai for quite some time, his family decided to move to Basmath, Hingoli from Maharastra, it is a small village 25+ Km from the City of Nanded.
After working for small-time fabrication jobs, he saved some money for his workshop in the village and started taking jobs of his own so his children could get proper education and don't have to go through with the difficulties and hardships he went in life.
Some of the work he did before he met with an Electrical tragedy accident while doing one of the jobs he took.
The Accident
On the Eve of 20th Feb 2019, while unloading the material (Steel Pipes) from vehicle one of the Pipe in his hand touched the Electric wire of Electric pole resulting in Electrick shock accident (Electrocuted).

There were multiple burns, a few on the right hand and the stomach.

His coworker immediately took him to a nearby hospital where the attending doctor did ECG on him to make sure there isn't any significant damage to his heart or other organs and with God's grace those results came great. However, the doctor suggested to transfer him to the hospital, which has ICU for burned patients.
He was then hospitalized to the local hospital of Basmath Village.

After keeping him under observation for a couple of days family decided to shift him to the bigger city in the hope of saving his hand, he was taken and hospitalized in Owaisi hospital and research center of Hyderabad city.

Imputation
Doctors at Owaisi Hospital kept him under observation for a week to try and save his hand.
So after the recovery, he could start the work again, but it was not to be and finally they had to take the call on imputing(Cut) his hand.
Imputation shattered him emotionally big time as he would no longer be able to work with his right hand, and being fabricator his hands are the most important thing.

I visited him at Hyderabad hospital and showed him a new technology of prosthetic (Video) hand which could allow him to do essential functions on daily life, and maybe he could take up a few different things in his life to earn bread and butter for his family.

I could see the joy in his eyes as the demo in the video was playing, that is when I thought of starting a campaign at Milaap.org for helping him raise the money needed to buy that prosthetic hand.

His father is a local worker, and mother homemaker, whatever money they had is all been utilized in the expenses so far.

Mahmood has shown firm face to his situation and still smiles in all this pain, his family and relatives can't afford this big money to cover the expense of prosthetic hand.

You can HELP him, and his children have a healthy and normal life again by making contributions to this campaign.

If you can't contribute, please share this on your social media accounts.
Quotation for Artificial Hand:
Thank you for reading so far.