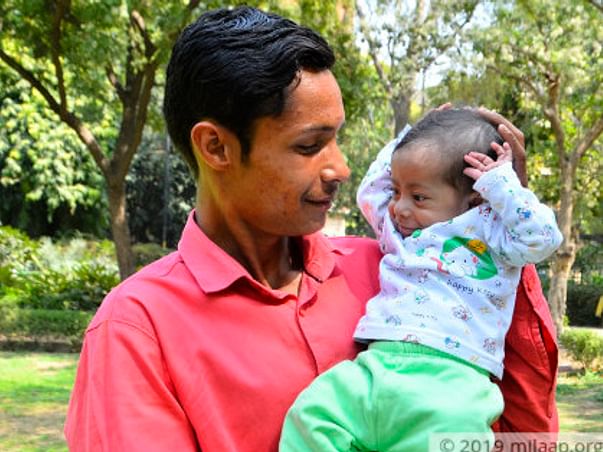 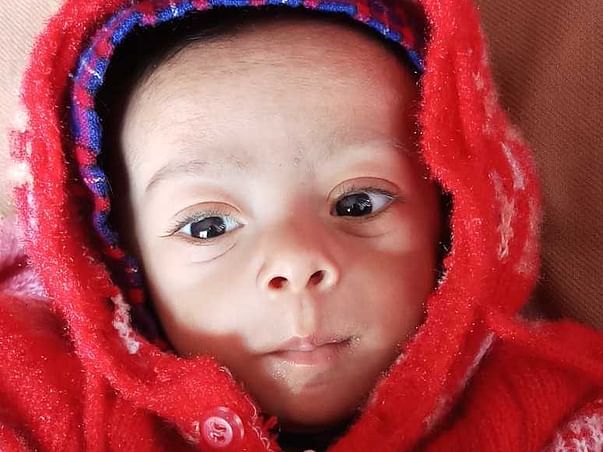 Sugarcane farmers in Bijnor, Uttar Pradesh, are going through one of the worst financial periods to hit them in a long time. Many have unpaid dues, which have led them to protest violently on streets and even ransacking sugar mills. Many even use self-immolation as a protest mechanism. Some like Aakash Tyagi who work on others’ farms get their dues very late. While he struggles to feed his family due to the delay, he prefers to remain calm and composed. This not because he is not angry at the system, but because his 6-month-old is suffering from a severe heart disease and his only focus is on saving him presently.

“I am promised Rs 40,000 a year, but I end up getting only Rs 30,000 due to the cuts for middle-men involved. I don’t get the money on time. Only God and I know how I am able to feed my family during the delay – by borrowing, by begging neighbors to help us get groceries, but there are still days where we go to bed hungry. In these difficult times, my baby boy, Aarav, was found to have a hole in his heart. I don’t know how I will arrange enough money for his surgery before it is too late and we lose him,”-Aakash

(A poor farmer, Aakash does not have the means to save his baby boy. This story is written from his perspective.)

We were shocked when we saw that our baby was born with a disability, but little did we know he had another serious illness

For poor people like us, marriage is a way through which we can find a companion - one who will stand with us through all the struggles that we go through on a daily basis. One who will always welcome us with a smiling face even if we go back home without a single paisa. Aastha has always been my pillar of support. I have not been able to buy her a sari or a piece of jewellery in the two years that we have been married, but she has never complained. When she gave birth to our son last year, my respect for her only grew. We believed this addition of a new member to our family would double our happiness, but instead we were filled with worry when we saw that his feet were bent. When he was 2 months old, a routine check-up revealed at that he had a large hole in his heart, I was devastated.

“Our baby cries non-stop, for 2-3 hours at a stretch sometimes, but we try to remain calm around him. We try to make him laugh by making funny faces. We don’t want to be unpleasant around our son, so we keep our emotions bottled up inside,”-Aakash

He barely survived a life-and-death situation once, we don’t know how much longer he can go without surgery

Baby Aarav used to get cough and cold frequently as a result of his heart condition. This was normal for him, and no medicines could provide any respite. But last month, he had to be admitted in the ICU as his cold had gotten worse and turned into pneumonia. He was not breathing and turning blue, and if we had been even a minute late in reaching the hospital, we would have lost him. He had to stay in the ICU for more than a month – his condition was that bad. Day and night, I would stand outside the ICU, asking for updates on his condition. Looking at the doctor’s face, I’d actually come to believe that he was gone. But he survived. But doctors say that without an urgent open heart surgery, he cannot survive for long.

“He is only 6 months old, but he has to take 3 tablets daily. I don’t have money to buy even these tablets, which cost as less as Rs 40. How will  pay for his surgery which costs lakhs of rupees?”-Aakash

Baby Aarav has a large hole in his heart that is making him sick regularly. He cannot even drink milk properly due to his breathlessness. He cries for 2-3 hours continuously, which makes him run out of breath even faster. His father is a poor farmer who does not have the means to pay for his treatment. Without it, his heart can fail and he can lose his life.

With your kind help, this farmer will be able to make sure that his son gets the heart surgery on time and survives