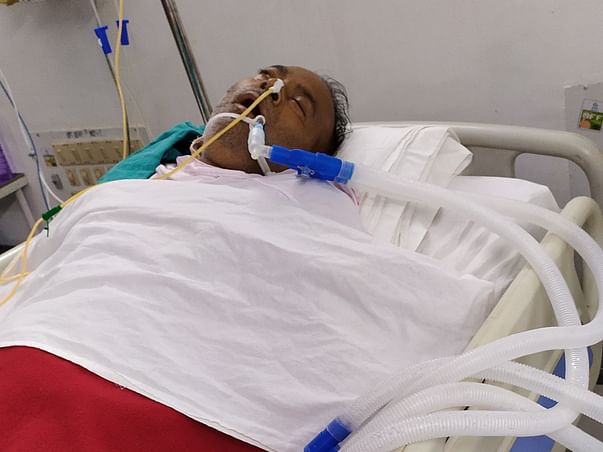 My father is 57 yrs old. He had been admitted in Tata Main Hospital on 13th December 2019 because he was suffering from pneumonia.
He already had diabetes so the pneumonia got worse, his condition deteriorated multiple times and he developed sepsis and he had multiple organ failure. He stayed on Ventilator (life support) for almost 30 days and he was finally discharged on 31st January 2020.

The complete treatment costed us 685000. We were struggling to pay for his treatment, we had to take out money from whatever my father had in his PF account, somehow we were able to gather that sum of money with the contributions from my relatives, my father's office staffs and friends.

But on 4th February 2020 we had to admit him again in the Tata Main Hospital and he went through a CT scan which revealed that he had developed another life threatening infection called Emphysematous Pyelonephritis which had spread to his right kidney and had destroyed the renal parenchyma.

On the night of 8th February 2020, his condition deteriorated again and he was put on life support (Ventilator) again. Everyone suggested to take him to Vellore CMC as the treatment was good and much cheaper.

I have been working in Hyderabad as a digital marketer for past 1 year. I was able to avail a loan of ₹175000. With that money we booked train ambulance and brought him to Vellore. I had medical insurance under my father's name worth ₹150000 with which I had hoped to get his treatment done in CMC.

When we reached Vellore CMC, the doctor said they couldn't accept him as they didn't have any ICU beds available and suggested we take him to Apollo Chennai.

Seeing no other option, we brought him to Apollo, the doctors took him in but to our dismay told us that the daily charges for ICU beds are around 150000 per day and he's going to be in the CCU for a while.

As of now he's still under CCU and has gone through the kidney removal surgery but he has developed another complication after the surgery and will need to be operated again. The hospital charges for Apollo alone has exceeded 1300000 now.

Please help us generate the funds by donating and sharing this link so that the treatment of my father can continue.