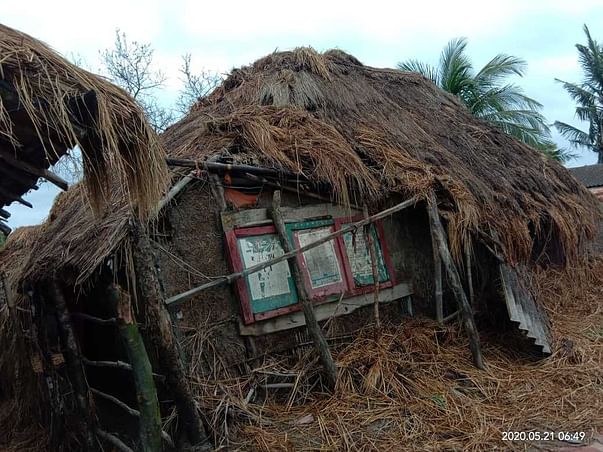 On 20th May Cyclone Amphan struck with huge ferocity.
Large parts of coastal West Bengal, were devastated. Of the most affected areas Suburban bore the brunt of the natural onslaught. Lakhs of mud houses were wiped away by winds and surging waters. Hundreds and thousands of acres of farm land was inundated by salty river water rendering agriculture impossible in the near future. Thanks to early warnings human casualty was very low, but livelihood, livestock, homes and roads were washed away. Hundreds and thousands of people were left helpless under the open sky at the mercy of the elements.
Soon after many NGOs, individuals, organizations and government agencies swung into action.
But the magnitude of the disaster is so great that a large fraction of affected people is still trying to have a roof over their heads along with food for their family.
Such disasters are not new to the Sunderbans.
Earlier after such events, people had the option to migrate to other states in search of jobs and then slowly rebuild their lives.
Unfortunately in the prevailing circumstances that is not an option anymore, so lakhs of people in Sunderbans are fearing a dark and unknown future.
Utilization  of Funds:
We have placed orders for 500 tarpaulins, each costing INR 600
size of each tarpaulin: 12 ft x 15 ft
Ration:
1. Rice - 4kgs
2. Dal - 1kgs
3. Potato - 2kgs
4. Sanitary pads - 1pkts
5. Vegetables - 1kgs
6. Salt - 1kg
7. Turmeric - 250gm
8. Oil - 1ltr
Hopefully it will help few people for some days.