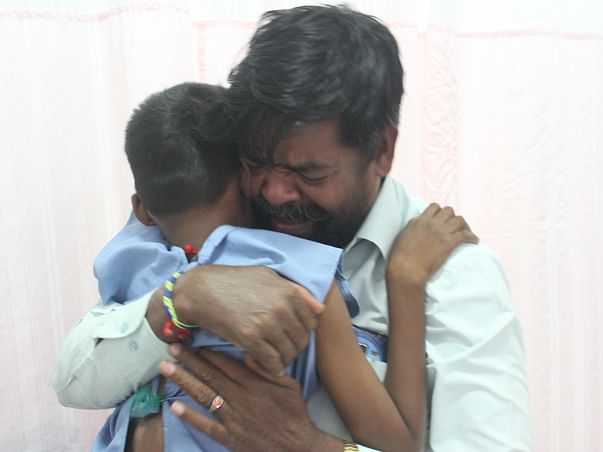 “When his leg pain becomes unbearable, he closes his eyes and clenches his fist tightly. When I ask him what’s wrong, he simply smiles and turns to his books for comfort. Even when my child is suffering so much, he just wants to read books. I think reading helps divert his mind from the fact that he’s weak and confined to his bed.”-Mathiyalagan, father of Kanish.

Ask 12-year-old Kanish what he wants to be when he grows up and he is quick to respond, ‘I want to be a scientist’.  Despite having modest means, his parents, Mathiyalagan, a small shopkeeper and Ramini, a housewife, always encouraged him to participate in quizzes and olympiads at school. They knew he would make them proud one day, but they didn’t expect that his spine defect would become so severe one day that he’d stop walking altogether. Today, Kanish begs his father to carry him to the school sometimes; attending classes even for a few minutes gives him utmost joy. He can be cured completely with an immediate surgery, but his poor father is struggling to arrange such a huge amount on time.

Kanish’s surgery has been delayed for a long time now, due to his poor health and family’s poverty

Kanish was born with lipomyelomeningocele, a fatty mass on his backside, attached to the spinal cord and kyphoscoliosis, a deformity of the spine which leads to abnormal curvature of the back. Though it was ideal, he could not undergo surgery as an infant because he was severely underweight. The doctors told the parents clearly that he may not survive the surgery if his body is not strong enough to endure it. This coupled with Mathiyalagan’s poor financial condition led to an inordinate delay in treatment, which has now worsened his condition.


“We used to feed him nutritious food, but his physical growth was never satisfactory – he always looked smaller than his age. We knew there was a problem with the way he walked, bent to the left side, but did not expect it to become worse due to our lack of education. Money was always a problem too; when we had to choose between feeding our three children (Kanish, his elder brother and younger sister) and taking Kanish to the doctor, we had to choose the former due to or helplessness.”- Mathiyalagan.

This poor child now faints very often, and cannot even go to the washroom by himself

The fatty mass that is present on Kanish’s back has some entangled nerves present in it too – which has affected his brain and motor system. This makes him faint at least thrice on any given day. His left leg has been painfully bending inwards that walking has become next to impossible now. Kanish, who was once independent and active, is now completely dependant on his parents for everything from eating food to using the washroom.

“His defective spine is putting pressure on his whole body that he lies on the bed all the time now because of tiredness. We have to carry him to the washroom every time he has to relieve himself. On some nights, he wets the bed because he feels bad to wake us from our sleep. My child is so considerate even when he is suffering.”-Mathiyalagan, with tears in his eyes.

Mathiyalagan has not been able to leave Kanish’s side for a month now, he does not have any way to save him

Mathiyalagan used to own a small kirana shop in their small village in Tiruvannamalai, Tamil Nadu and earn Rs 200 per day. Though he could not afford to give his children everything that they asked for, he made sure that all of them went to school and had enough food to eat. But since Kanish’s condition has become critical, he has not been able to go to work. He tried begging everybody he knew to help him, but there has been no response so far. This poor father can only pray that his son does not become fully disabled and even die, before he arranges the money.

“Kanish does not let me leave his side even for a bit now. When he asks me if he will curl up into a ball one day, I have no answer. He has stopped eating completely as well – sometimes if we force him, he eats half an idli. I don’t know how long he can go on like this. I just hope God finds a way for me to save him.”-Mathiyalagan.

12-year-old Kanish has a spine defect that has made it difficult for him to walk, as a result of his legs bending inwards. The nerves tangled in the fatty mass on his backside have also started affecting his brain – making him faint regularly. He needs a surgery to go back to school and realise his dreams of becoming a scientist one day, but his poor shopkeeper father cannot afford it. If you help him, he will grow up to be a smart individual.