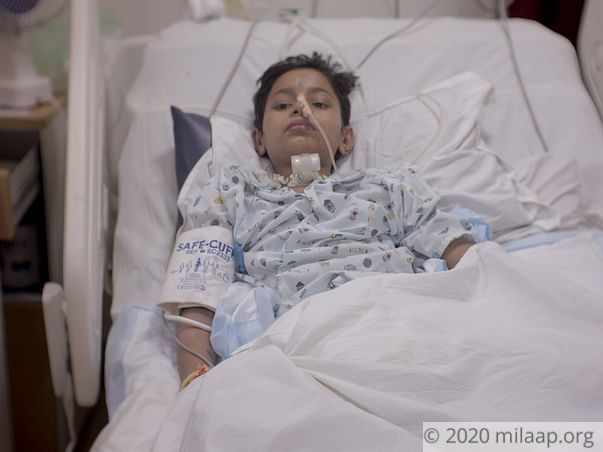 Bhagu Bai spends most days by her son Kalu’s bedside at the hospital, where he lies motionless, a dozen tubes running through his nose and throat. After he became paralyzed unexpectedly more than a month ago, he has not been able to speak or swallow food. He is being sustained by IV fluids alone. “He just stares blankly at the ceiling most of the time. But sometimes, I catch him looking at me, tears streaming down his cheeks. He tries, but he can’t even make a small sound,” says Bhagu.

They cannot bear to see their child suffering, but Bhagu and her husband, Shiv Singh, have hope that their son will recover as he in good hands, in a better hospital now. After all, he had been through much worse in another one a few weeks ago. “After his entire body became stiff at one point, my husband had to carry him from one floor to another. While doing so, he suddenly fell from his arms on to the floor and started getting seizures. By God’s grace, we were able to bring him to this hospital fast. I can’t imagine what would have happened otherwise,” adds Bhagu. The only thing that they're worried about is money, as they have nothing left to continue his treatment.

An old photo of Kalu

‘He laughed so much during our trip, we never realized he would be silenced by illness shortly after’

After Kalu’s father, Shiv had got a new job as a jewellery salesman in Mumbai three years ago, he had to leave his family behind in their village of Dhani in Rajasthan. But after getting a salary hike last year, he was able to bring his family to come live with him. Two months back, the family decided to go visit their relatives back home, as it had been a while since they went anywhere due to financial constraints. “All of us enjoyed the trip so much. We did a lot of things – we went to the park, we went boating even. I had never seen my son so happy before that. He was laughing and having so much fun – in fact he even refused to go back to Mumbai; he only budged when we promised him that we would go on frequent trips like this,” reminisces Bhagu.

Soon after they returned to Mumbai, everything went downhill. Kalu became weak, refusing to eat anything. He complained of neck pain and began throwing up everything he ate. Shiv took him to a nearby hospital, where doctors failed to diagnose his condition. Due to lack of proper treatment, his neck became stiff and he became paralysed from waist down and could not even move his limbs. Thankfully, he was rushed to a good hospital, where doctors diagnosed him with Guillian-Barre Syndrome, where the body’s own immune system attacks the nerves. He underwent a surgery for his neck stiffness, and is slowly recovering, but not fully out of danger.

An old photo of Kalu with his grandmother and cousin

‘He is a smart boy, a good student and a loving son…please help us save him’

Shiv used to earn only a meagre Rs 8,000 per month, but ever since Kalu got sick, Shiv has been unable to go to work. Either he or Bhagu have to be there at the hospital all the time as their son’s condition is very critical. With a 2-year-old baby girl to care for, these parents are struggling to swap responsibilities. Added to this, they have run out of all the money that they borrowed from friends and relatives. “Now all we can do is beg anybody, everybody, to help save our son. He is such a good boy – so softspoken, a teacher’s pet and an all-rounder at school. He loves the simple things in life, he has never asked for anything more. We cannot afford to lose him,” laments Bhagu.

Kalu’s convulsions have stopped and he has a high chance of recovery, provided that he gets prolonged treatment. His parents are unable to pay the daily treatment charges that can go up to a whopping Rs 20,000 per day. All they can do is hope and pray that Good Samaritans come to their rescue.

UPI: rzpy.givetomlpmasterka003@hdfcbank (Copy to clipboard)
Or
Click here to read the instructions before you make a bank transfer. 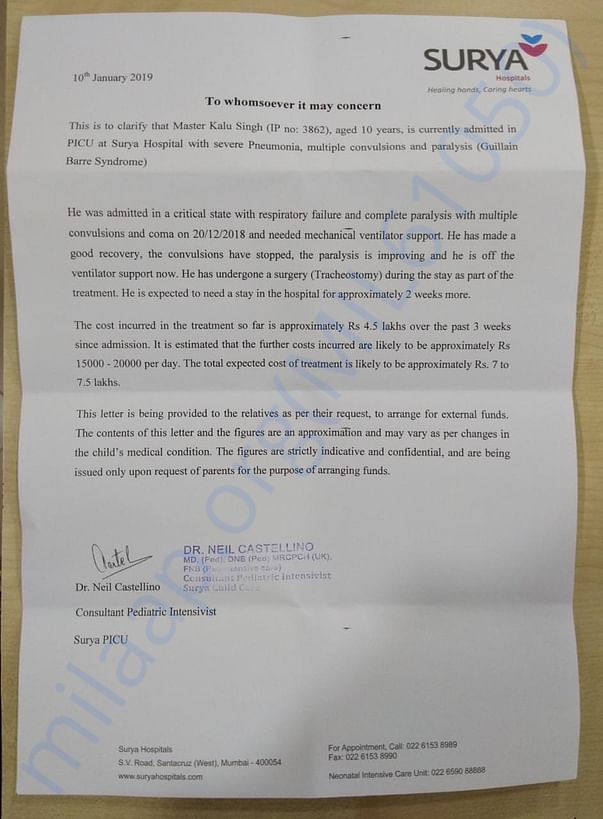 UPI: rzpy.givetomlpmasterka003@hdfcbank (Copy to clipboard)
Or
Click here to read the instructions before you make a bank transfer.

Kalu singh is doing well. He is recovering and has been discharged from the hospital. He is stable now and is on medications. He is asked to come for his regular follow ups to the hospital.

Thank you once agian.

Report fundraiser
See how thousands are crowdfunding for their causes on Milaap
Rs.195,687 raised 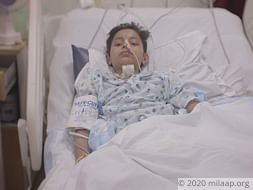