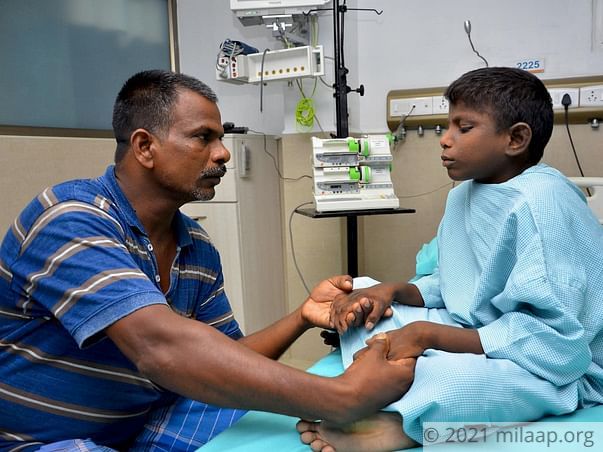 Subramani, a daily wage labourer and his family of three – wife, Veerammal and their two children – Kaliyamoorthi (16) and Seemaraj (14) lived a humble life in Pudukkottai, Tamil Nadu. Their thatched hut was the only property they owned, and though it could barely protect them from bad weather or snakes, they were content with whatever they had. But the recent cyclone Gaja which hit the coastal districts of Tamil Nadu, destroyed their hut and all their hopes along with it.  Now after losing everything they had, they have become stranded in their own village - moving from relief camps to relief camps – temples, panchayat offices, etc. Adding to their troubles, their elder son Kaliyamoorthi’s liver has failed completely and he is very critical.

He needs a liver transplant urgently or he may not survive. Subramani is completely lost and helpless as he does not have the means to afford it in these difficult times.

Medicines were keeping this teenager alive for all these years, but they’re not enough now

Kaliyamoorthi was born with a liver condition called cholestatic liver disease, where the drainage of bile (that is essential in the digestion of fats in the body) is severely obstructed due to abnormalities in the liver’s bile ducts. Ever since he was diagnosed, he has been on regular medication. He used to suffer from regular jaundice from time to time, but that never stopped him from being active and going to school. He dreamed of doing well in studies so that he could pull his family out of poverty. But his condition started becoming worse a few months ago. Kaliyamoorthi does not even look like a 16-year-old, due to stunted growth as a result of his liver disease. His liver has become so damaged that, without a transplant, he may not live for more than a few weeks.


“The doctors have told us that his immunity is compromised now and he can catch get life-threatening infections fast. But ever since we lost our home, we have been on the move – from one congested and unhygienic public area to the other. I am scared that he will get terribly sick, but what choice do we have?”-Veerammal, mother

Jobless and stranded, this daily wager fears he will lose his son

Working as a daily wager in farms, Subramani used to earn Rs 150 a day. That was never enough to feed his whole family, but he and his wife were happy to go to bed on empty stomachs for the sake of their children. Subramani had to borrow money periodically to pay for Kaliyamoorthi’s medicines and was struggling to pay instalments back when cyclone Gaja turned his life completely upside-down. Now he is left with nothing and no one to help him. Everybody he knows in the village is battling similar conditions and struggling with their own losses. He is helpless and is begging people to save his son.

“Gaja took everything away from me, but I cannot risk losing my son too. Every day, as his eyes get more yellow and he inches closer to death, I am losing hope,” Subramani, tearfully

16-year-old Kaliyamoorthi is suffering from end-stage liver disease. He needs an urgent liver transplant to survive, and his mother is a matched donor, but his poor family is still reeling under the devastating effects of cyclone Gaja and cannot afford it. 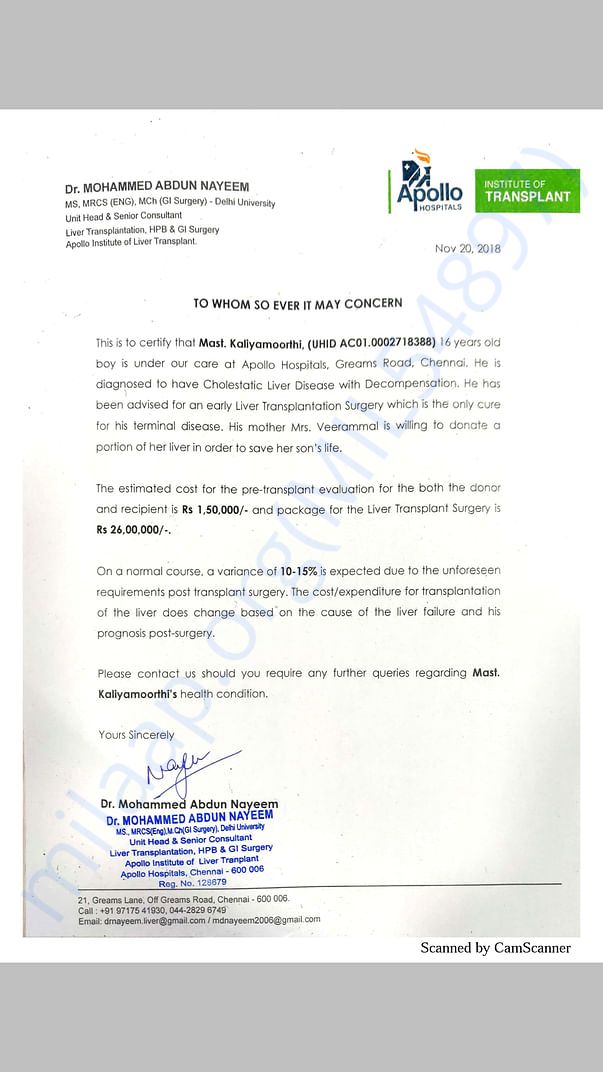 Scan & donate with any app
check_circle_outline Download payment receipt
Report fundraiser
Know someone in need of funds for a medical emergency? Refer to us
Rs.135,644 raised 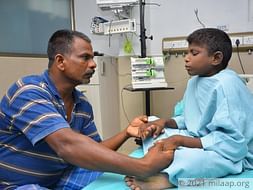