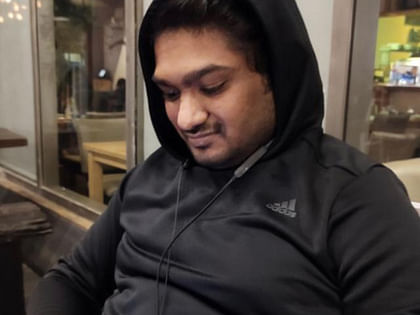 Help Jeevan’s family recover from crisis
It was on the night of his 36th birthday, April 13, Jeevan left his house alone to get
admitted to a nearby hospital as he was having severe cough. He never would have
thought that it might be the last time he would be seeing his wife and kids.
He was tested Covid positive on April 8 th , self-quarantined at home and joined nearby
hospital on April 13 th . It was on 15th night, that his oxygen levels suddenly dropped to
75. He was immediately put on oxygen supply and was moved to a different hospital
where he could be treated by an expert doctor.
His struggle started on the night of 16 th April, when he was admitted in ICU. He was
put on NIV (non-invasive ventilator support) where his oxygen levels showed 92 with
full oxygen support. His levels were dropping to 55 without the oxygen support.
With all the treatments (remdesiver, itolizumab, 4 units of plasma, iv ig, umbilical
cord stem cell), he didn’t respond. It was a long battle of 12 days for him in the ICU
where he had to see at least 10 dead bodies packed from the same ICU room and
unshaken.
He never lost hope and was very brave that he will come back by fighting the virus.
He never showed any weakness and was always positive. Even in that condition he
was concerned for his family members who were tending to him by telling them to be
careful and take care of themselves.
He had further complications with pnuemothorax on April 21st where his left lung
collapsed due to air leak. Doctors quickly attended him, made a hole through his
arm, inserted a pipe to his lung and saved his life.
I still remember him asking me during the procedure, struggling to breathe, “AM I
SAFE?”
It was literally like a man thrown into a pool of water not knowing how to swim. No
one should suffer like this, I felt it as if it was like water boarding even with full
oxygen support struggling to breathe. Through the struggle, he always fought it out
so bravely by not giving up.
He was intubated on day 12 in ICU on to a ventilator and breathed his last the same
night with cardiac arrest.
It is really pathetic when we literally can’t cry out loud with masks and cannot hug
each other to console and comfort one another due to this pandemic. His mother
was unable to see and take a last glimpse of him from the day he was in hospital. So
heartbroken are we that we never felt this helpless. No family should go through
such pain as this.
Jeevan is survived by his wife Monica, son Sashreek (8-year-old) and daughter
Shrestha (4-year-old). The unimaginable pain that his elderly parents are going
through at the sudden loss of their happy and cheerful son is heart-breaking and
cannot be fathomed in words.

Jeevan was a caring father, loving husband, responsible son, ever friendly brother,
cheerful colleague, glorious friend, and a wonderful human being. He was a
responsible young man who always thought about safety and well-being of family
and friends. He always prioritised others before himself. He was a man true to his
word whose Yes was Yes and whose No was No. Last thing he wanted to hear from
his wife and brother was an assurance that his kids and parents will be taken care no
matter what.
In the words of his wife, “He was a man full of positive attitude. He loved me and my
kids so much that he wanted to give us best in everything, every minute of his life.
He said that he would never leave me and go”
He was always joyful, ever smiling, active, has an incredible positive attitude and
always ready to help others. He was extremely ambitious, a family man who always
dreamt of providing good life to his kids and family. He worked as a Vice President in
JP Morgan &amp; Chase, Hyderabad.
His wife is now positive for covid and is isolated in this difficult time where she is
being alone, away from her kids which is painful for all of us to see. He, who could
not see his loved ones in pain is no more to come and put a comforting arm around
his wife and kids, when they are sad or in pain nor pull them close to his bosom,
loving them unconditionally, like he always did. No one is able to answer the kids
when they call ‘DAD’ during this difficult time.
Let us all pray and help with whatever we can by extending our helpful hand for the
kids’ future. We definitely cannot give the life he dreamt for his loved ones but can try
to fill his void with financial support.