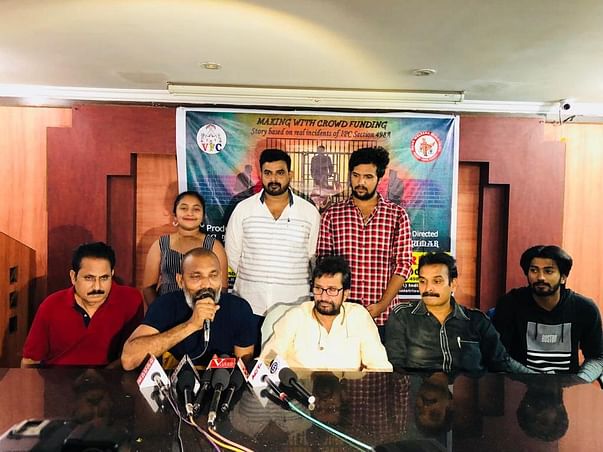 Name of the Project : Pellaina Brahmachaari in Telugu
Married Bachelor in English
Movie Title is registered at Telugu Film Chamber of Commerce, Hyderabad on 23rd February, 2019 under the Visalakshi Film Creations Banner. The title Registration No.23007/TFCC/TR.

A man and his family members, all are suicide themselves. Because of a false criminal case filed against them at the police station.
A Hindu boy is studying 1st year B.Com., He loves a Muslim girl in the same college. Both are from the same village too. His mother is working as peon in Village Revenue Office. She is the widow. The girl’s father is working as right hand of MLA in the same village. He should know their love from his assistant then he tried to murder the boy. The boy escaped from them. After that the boy should leave the girl end of the story because of what he has seen about married women filed a criminal cases against their husbands in the court.
A married woman filed a domestic violence and dowry harassment against her husband and his family members. Then the cases are running in the police station and the court against the husband. The woman realized that she did her mistake against her husband and his family members. End of the story both are compromised in the court. They should lead their happy life with their baby girl 3 years older.
Another married woman filed a same case against her husband and his family members. The case is running in the police station and the court. He is contesting the case with her wife at the court then he wins the all cases end of the story. She is suspended at her VRO job and sent to jail because of her false case. (Cases as criminal and civil cases – 498A of IPC, and Divorce). The husband remarried a lady advocate in the end of the story.
A man is got so many cases by her wife. Every hearing date, he is attending for each case in the court. (cases like as 498A of IPC, MC, DVC, and others)

Pre-Production:
The film script work is completed at VFC Office in Kurnool City Andhra Pradesh. Auditions was conducted for Artistes at VFC Office in Kurnool, A.P., at Annapurna International School of Film and Media in Hyderabad, Telangana State, at Satyanand Acting Institute in Vizag, A.P., Koothu–P–Pattarai in Chennai, Tamilnadu and other acting Schools. We are booking 6 double bed room plots for artistes and technicians staying purpose during the shooting in Kurnool.
Casting:

A few technicians have selected from Tamil Film Industry in Chennai. The Technician are Music Director, Cameraman, Cameraman Assistants, Arts Department, Poster Designer, editor and etc. we are paying each technician for the film. We are going to record 4 songs very soon. We are going to take man power for Transportation and food very soon for the period of the film shooting. When we get crowd funding it will be speed up the film works.
Production:

The shooting should complete within 50 days, and also we have reserved 5 additional days for patch works. So, total shooting days are 55.

We should make the expenses every day at Rs. 60,000/- for all technician expenses in the shooting period (including food expenses, drivers’ salary, car rent, diesel or petrol expenses, and other technicians). Shooting should be in Kurnool District Andhra Pradesh only. We should pay to female artistes and others as per their agreements for their given days.
Camera Rent-Cameraman Salary, Music Director:

Post production works should be in Chennai or Hyderabad. We should pay for all (Editing, Poster designers, Graphic designers, sensor, Re-recording, Final mixing, dobbing, DI) at Rs. 9,00,000/-

This is my first film but I have theatre knowledge and film making knowledge because of I worked as assistant director “Naa Bangaaru Thalli Telugu Film”
I have made total plan to make this film. Who give their contribution that I will surety for the each contribution on company letterhead. After, the film should release or sell we will distribute the money for their contribution and benefits will share as per their contribution ratio. We will show the accounts from starting to ending of the film production works.
Note: can contact for any queries

Donate
0%
Be the first one to donate
Need Rs.20,00,000
Card, Netbanking, Cheque pickups
Or Donate using