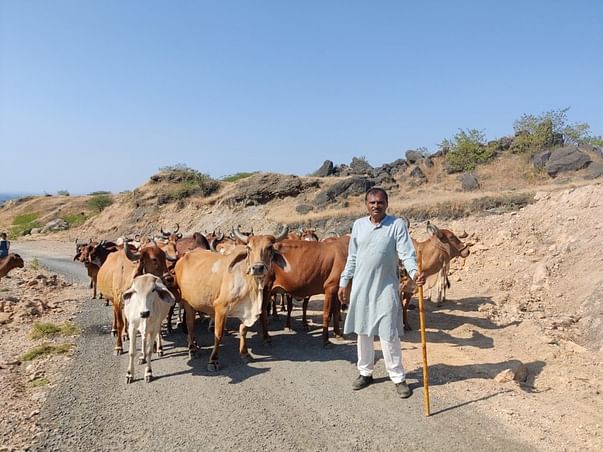 Gujarat State in India faced a terrible draught from the years 1985 to 1998 and the state had to bear with the worst water problem. The underground water level went deep and almost emptied. Villages faced a severe problem sustaining agriculture, cattle. The overall life in the villages and the environment was disrupted. For mere existence village folks migrated to urban areas. In 1998, a thought occurred to Mansukhbhai Suvagiya, that each village should have five to fifty check dams built on streams and dig lakes on the outskirts. During those days there were no government schemes and rather than getting depressed Mansukhbhai worked out a five-point program based on his own intuition.
Village bodies: For creating an awareness about water harvesting and creating water reserves, Mansukhbhai held public meetings to make Village bodies.
Selection of appropriate places for check dams and lakes: Selecting such places that would maximize water capacity and lower cost of making dams and lakes. Mansukhbhai selected more than 2000 places in about 500 villages.
Check dam designs: During those days government check dams schemes were from 2 to 10 lakhs, and making 5 to 50 check dams per village was unaffordable. Banking on his intuition Mansukhbhai created a new design from RCC, which proved sustainable even after a decade.
Community Fund: Mansukhbhai held community gatherings and initiated this fund by putting a substantial amount as starting fund. This motivated farmers, pheasants, cattle breeders, teachers and even workers to give their share in the village community fund.
Self Help: The program was aimed at decreasing cost in making check dams and lakes, and improving the quality of work, by providing physical self-help. Mansukhbhai himself went out 30 villages and himself worked on the dam sites digging from a day to even 90 days, in spare time at night. This motivated people of Saurashtra and in the forthcoming 5 years, 10 lakh man days were spent in water harvesting through check dams and village lakes.
At Jamka, a model village in District Junagadh, its people created history by spending twenty-thousand-man days through self-help to build 51 check dams and 2 large lakes. Without governmental assistance, and in a marginal amount of only 10 lakhs, Jamka was the first such village in the world to eradicate water shortage.
Mansukhbhai replicated this in many villages including Mota Kotda, Chanaka, Vichhavad, Nana Kotda, KhaMansukhbhaihaliya, shirvania in Junagadh district and Rafala, Babra, Mota Devalia, Nani Sanathli, Mota Bhandaria, Khijadia (khari), Khadkhad in Amreli District and Rajpara in Bhavanagar District, Songadh, Chadrelia in Surendranagar District and Pransala, Vadekhan, Dhank, Mervadar in Rajkot District and Moti Nagjar in Jamnagar District.
Check dam and village lake program turned into a water Revolution:
To create awareness a Water Revolution Day was celeberated in JamkaVillage on 20 NoveMansukhbhaier 1999. A mammoth 50000 people gathered at this Nations first and largest Public Gathering to revolutionise water conservation effort.
Mansukhbhai motivated the people to take an oath to eradicate water scarcity and conserve water in their villages. The Chief Minister along with the cabinet of ministers attended this Historical event. Motivated by the Jamka scheme, Gujarat Government initiated the Shri Sardar Patel Cooperative Water sharing scheme. In this gathering, saints, scientists and the people at large titled Jamka as the birthplace for National Water Revolution and recognized Mansukhbhai as the founder of this Water Revolution. The people, state government and several NGOs joined this movement.
Result: Underground water table was found to be between 300 to 700 feet in Saurashtra, and after this program, drinking water struck between 40 to 80 feet. Dried rivulets came back to life after many years. Wherever check dam schemes were implemented there was an increase of 40 to 100% in irrigation. Agricultural produce, Rural employment and fodder production has doubled. Electricity consumption, earlier used for irrigation through ground water, has decreased by 50%.
According to this program, Mansukhbhai has made more than 3000 check dam lakes in about 300 villages and has recharged ground water by manoeuvring rivulets to fill 3000 abandoned mines in more than 10 villages.
Model well recharging scheme: In Village Khijadia (khari), District Amreli, a novel scheme was implemented where a river carrying lot of silt was desilted and 35 wells were recharged.
Recharging abandoned mines: In Songadh, a village in District Surendranagar, surface water was altered, and 3000 abandoned mines were filled to create a 30-lakh cubic meter of water reservoir, completely eliminating water scarcity in the region.
Check dam design: Mansukhbhai worked on five alternative designs of RCC check dams in village Pransla Vadekhan in district Rajkot and in just 9.0 lakhs created a dam reservoir storing 10 lakh liters.
Through Village bodies, Selection of appropriate places for check dams and lakes, Check dam designs, Community Fund, Self Help schemes Mansukhbhai S created the most economical, simple and ecofriendly design, which have been recognised as a sustainable solution to water problems in the third world.

Donate
0%
Be the first one to donate
Need Rs.1,000,000
Only INR donations accepted towards this cause
Card, Netbanking, Cheque pickups
Or Donate using