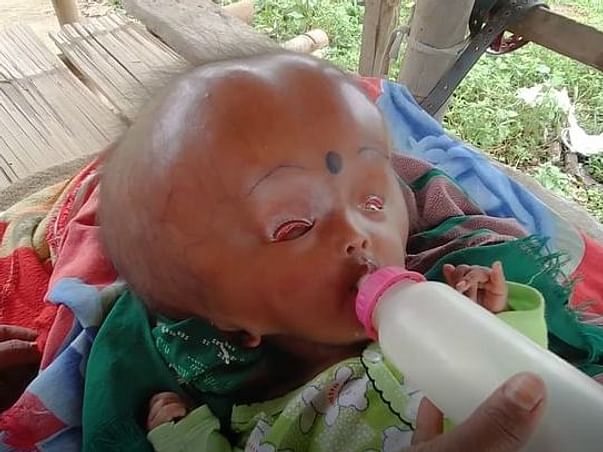 Share
A newborn, Ishta Rani, suffers from macrocephaly, and her family is struggling financially to seek treatment for her ailment. Hailing from Majpara in Assam, the hapless child is in dire need of any monetary aid she can get to live a life free of struggles.

Macrocephaly is a condition where the head circumference is more than two standard deviations (SD) above the mean value for a given age and gender. The little girl fell sick after two weeks of being born and got diagnosed with the ailment soon after.

Struggling to make ends meet, her mother is drowning in debt and works odd jobs in Itanagar. Ishta resides with her maternal grandmother, Lina, who is a farmer and looks after the little one. She too struggles to tend to Ishta and wells up every time someone brings up her ailment.

With her father out of the picture, Ishta's mother works hard to look after her children, and pay off a debt of Rs 1.5 lakh (USD 2,015.74), spent so far on Ishta's treatment. Ishta also has two other siblings, each under the age of ten.

With her growing family and falling income, Ishta's relatives struggle to seek treatment for her and keep everyone fed. Fed up with their current predicament, they are waiting for a good samaritan. They express their inability and seek financial aid from society, urging people to support Ishta during these testing times.