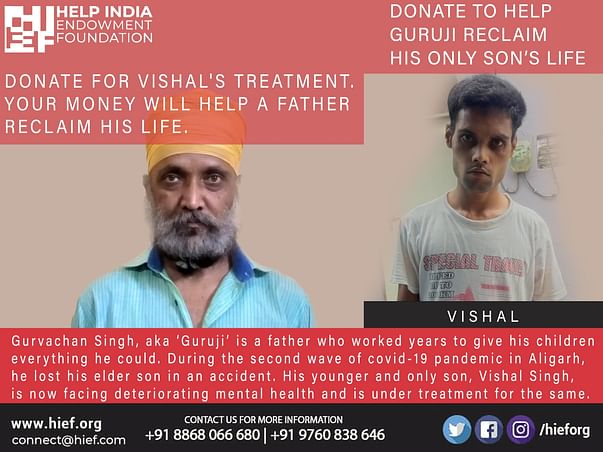 Share
The bond of a father with his children is a beautiful one. Every dad visualises a great future for his children. Some are privileged to secure it easily, others are restricted by lack of money.

Gurvachan Singh, aka ‘Guruji’ is one such father who worked years to give his children everything he could. Early this year, he lost his elder son in an accident, something which shook the entire family. Having difficulty breathing he was kept on a ventilator for several days. But the doctor advised Gurcharan Ji to shift him to some other place. Due to the unavailability of oxygen due to the second  wave and shifting to multiple places, he succumbed to his complexities.

The unfortunate event and the financial uncertainty in the second wave then pushed his younger and now only son, Vikram Singh, towards a deteriorating mental health. Their story of his two sons is tragic, where a family was wrecked by the misfortunes that came their way in 2021. Following a very bad year, Vikram faced depression that resulted in a failed attempt to kill himself. He had been facing problems of financial uncertainty and problems in his marriage, which kept pushing him further into the rabbit hole of mental illness.

Guruji, who works as a night watchman to earn his daily bread, is running out of money for the costly treatment. But being a father, he couldn’t give up and so he reached out to Help India Endowment Foundation (HIEF) to seek help to raise money for the treatment of his son’s mental health treatment.

Vikram is currently undergoing treatment at the clinic of Satendra Saxena, a popular Brain Specialist in Aligarh. Fortunately, Saxena’s treatment is working and Vikram is successfully responding to the medicines. Guruji has taken care of over half of his treatment cost from his own paltry savings, due to which his son is gaining a new life. However, the treatment costs are overbearing. The medicine and hospital costs add up to INR 18,000 for a month. Vikram might need to continue the treatment for at least five months.

At this critical juncture in Vikram's life, where he has gained a bit of hope, even a little amount from your side will go a long way. Kindly do help Guruji reclaim his son’s life.