An Overview of the TRUTH

Thirty six years after the Union Carbide gas disaster in Bhopal, over 120,000 people still suffer severe illnesses due to the damage caused by the gases to almost every system of their bodies. Moreover, 100,000 people have been drinking contaminated ground water for the last 14-20 years and the numbers are increasing. Despite massive expenditures, the medical care of the exposed people continues to be terribly inadequate. Union Carbide continues to refuse to share medical information on the leaked gases and symptomatic treatment has come to be the mainstay of medical care of the survivors at government hospitals. Following from this it is not uncommon to find damages caused by gas exposure to be compounded by the treatment received. The extent of permanent health damage caused by exposure to Union Carbide’s gases, can be estimated by the sad fact that this year the death rate due to COVID 19 was 6.5 times higher among the gas exposed population compared to others in Bhopal district.

The Sambhavna Trust Clinic opened its doors on September 2, 1996. The Clinic, run by the Sambhavna Trust, an independent, community based, non-governmental medical initiative concerned with the long-term welfare of the survivors, offers an innovative blend of modern and traditional therapies free of cost to the survivors.

The Clinic is located in the middle of communities that were most severely affected by the December 1984 gas disaster. Being 400 m south of the Union Carbide factory, the Clinic is also close to the communities next to the factory whose chemical wastes have contaminated their groundwater. The Clinic is built on a 2 acre plot including a herbal garden. The building incorporates rain water harvesting, solar energy, waste water recycling, solar medical waste disposal, non-toxic construction material and other eco sensitive features.

Only those with a history of exposure to Carbide's gases and those who can provide proof that they have been exposed to contaminated groundwater are registered for care at the Clinic. Those born to gas affected parents until December 1986 are also registered because Sambhavna’s research has documented significant ill-effects in the generation born right after the disaster. About twice as many women as men visit the Clinic.Since 1996, we have registered close to 36,000 chronically ill people from affected communities.

The clinic also carries out community health work and conducts research on long-term health impact due to toxic exposure.

The following is a summary of Sambhavna’a activities:

HOW CAN YOU HELP?

Sambhavna does not accept money from governments, corporations or large funding agencies. All funds required to run the Sambhavna Trust Clinic come from individual donations. A large part of Sambhavna’s funds used to come from over 30,000 individuals in the UK. However, the FCRA of the trust has not been renewed and the functioning of the organisation is at a huge risk! Soon, we might even find the place - SHUT DOWN!

Currently there are close to 36,000 patients who need your support. Sambhavna does not charge any fee to the patients coming in for treatment.

It is now time for us to come together to support an organisation which has been working selflessly for the last 24 years. 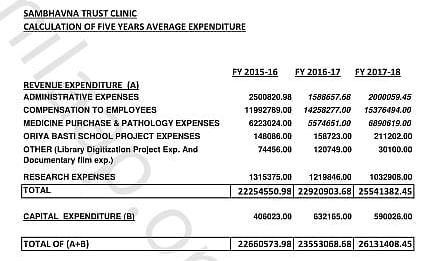