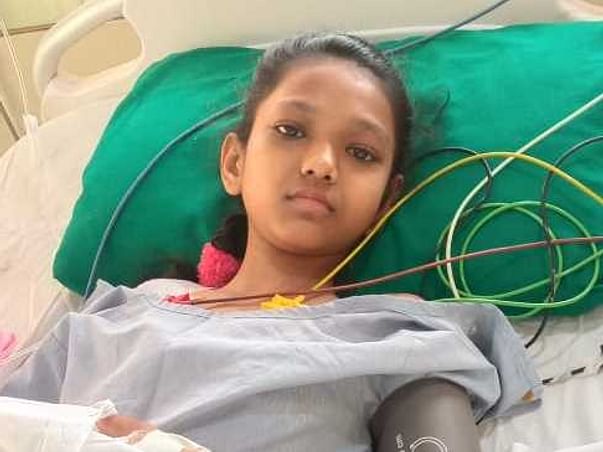 Share
12-year-old Falguni is a person living with Type 1 Diabetes - which makes her insulin-dependent and keep monitoring her sugar levels strictly. To make matters worse, Falguni met with an accident in Udaipur a few months ago. She sustained a small injury on her right foot which got worse due to negligence by the Pacific Medical Hospital & College staff in Udaipur to the extent that they said her foot will have to be amputated. Worried, Falguni's father - Kailash Kumar - brought her to Mumbai to find the best treatment which would prevent having to amputate her leg. He ran from pillar to post with multiple rounds to various doctors in a bid to find the right professional for the right guidance. After much struggle, Falguni did get such treatment and amputation has been prevented. But the surgery, treatment, and additional medical cost for the injury along with existing expenses for her diabetes have landed the family in a huge debt amounting to INR 11,42,400. Meanwhile, as a diabetic, Falguni is also vulnerable to diabetic foot disease on this already severe injury.
Falguni's picture, injury image, bills of hospital expenses have all been attached with this message.  Her father has also maintained an account book to record all the loans he had taken for his daughter's treatment so that he can repay every time.
I request you to kindly donate any amount you possibly can to help this modest and hardworking family repay the debt they are reeling under and continue Falguni's treatment.