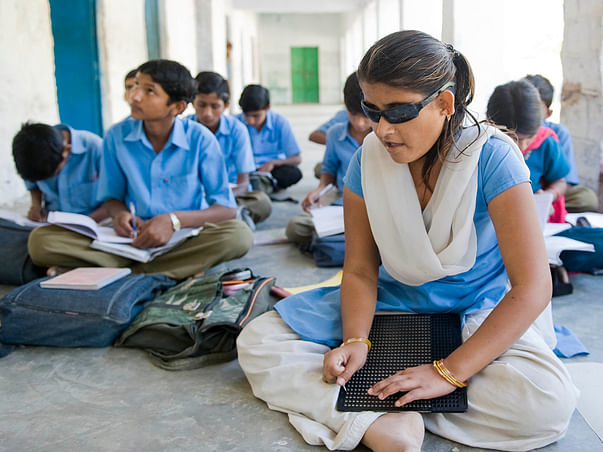 Dr. T.K. Bansal, the trustee of our NGO has been a senior lecturer in Physics at IIT Kharagpur but had to retire due to his poor eyesight. He himself has faced the hardships of a blind man. When he came to Delhi for his M.Tech studies at IIT Delhi, he was diagnosed with Retinitis pigmentosa and doctors told him that he will eventually go blind. He was broken and shed tears for many days. Then he decided that education is the only one that will stand by him. He started working very hard and stood first in his class at IIT Delhi. He further completed his Ph.D. from IIT Delhi and then joined the University of Oxford, UK, for his postdoctoral work.

As per a report published in The Indian Express in the year 2015, India has 4.7 crore people with moderate or severe vision impairment out of which 88 Lakh are blind. The life of a blind person in India is miserable. Although education is a fundamental right of every child, the blind and the visually impaired children are not sent to school and are considered to be a curse.

In his pursuit of helping blind students, he visited several blind schools and found that the organizers of these schools feel that blind students can not do anything. That is why they are taught only in braille and that too only in their regional language.

Most of the visually challenged students having great potential remain unprivileged due to the lack of resources and support. We as an organization, approach such students and provide all possible support to fulfill their education requirements in order to make them a visionary..

Donate
10 supporters
2%
Raised
Rs.2,196
of Rs.100,000
Only INR donations accepted towards this cause
Card, Netbanking, Cheque pickups
Or Donate using