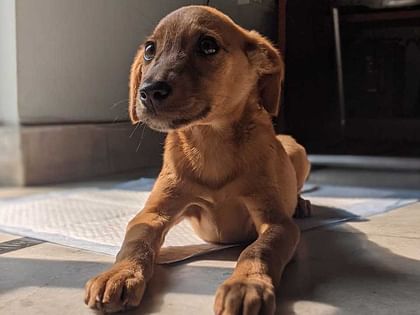 Share
Hello everyone,
All this started in January when we came across a litter of dead puppies. The pups lived inside a very big hole and we couldn't get a clear look at all of them. After a lot of effort, we were able to see all the pups and to our surprise two of them were alive. We had to pry those pups away from their dead siblings.
Both the pups tested positive for parvo. From that moment I knew the road to recovery would be tough. While the brown pup showed signs of improvement the white one's condition worsened. For more than a week he held on while his frail body was poked with needles. But after 8 torturous days, he finally gave up. My heart went out for the poor soul who had to go through so much.
The good news was that brown pup recovered and we named her Pari. I was relieved that I could save at least one pup. But soon after she caught jaundice and the new infection combined with compromised immunity lead to her death. This was even more heartbreaking because Pari found a home too.
Another pup from the same area tested positive for parvo. Her name was a sweety. She was an only child as her siblings died when she was just a baby. And she was a spoiled pup. Every feeder in the colony adored her. She was always bubbling with energy. And thus seeing the virus suck all this energy from her was tough.
I thought that the hard part was over but little did I know that my troubles were just about to start. We found another litter and unfortunately only one pup was alive and even he was in bad shape. He got a seizure that night and I knew in my heart that this was distemper and the reports the next day confirmed my fears. Not only that he even had parvo. From that moment I knew that I couldn’t get attached to the pup because chances of survival were pretty low. But look at him.
For two little weeks, Himmat held on. He recovered from distemper. He started playing with the kids at the shelter. But after two good days, he would get sick again since his immunity was compromised. Himmat died on 28th march but in his short life he lived up to his name. He always had a smile on his face even in the face of adversity.
Two more pups joined the rescue wagon when Himmat was healing. Both of them were rescued from different areas but had the same story – abandoned pups with no litter and no mum. We thoroughly searched the areas where these pups were found but it was evident that their families were not close by.
The first pup – Bhairavi – tested positive for parvo. After seeing so many pups die I was not very optimistic but to my surprise, she recovered really fast. I even did a small little photoshoot for her adoption appeal.
The other one – kk – had about 1000 ticks crawling on her body and couldn’t even walk or eat on his own. We had to shave his fur in order to take them all out. The small puppy got instant relief when the ticks were removed. And soon we realized that he was a naughty little puppy with a comical bark. He runs around the shelter barking dogs of all sizes.
With both puppies recovering I started preparations for their adoption posts. But disaster struck again. Two days ago both of them tested positive for distemper and the boarding that kept those pups now needs to give the serum to 13 puppies who came in contact with these pups and test 10 others for distemper.
And amidst all this chaos a puppy in my colony was hit by a car. I have lost 5 puppies to car accidents this year and I couldn’t lose another baby. The vet said that this puppy will not live for more than two days as his fractures were severe and he was hemorrhaging internally. Today scooby is much better.
His bleeding has stopped and his legs are now plastered and on the mend. However, his whole pelvis was crushed, and recovered will be very slow. Moreover, he will require a lot of therapy to get back on his feet.
I have been paying for the treatment of my pups and the shelter has helped me a lot with my rescues. But I cannot cover the cost of these many pups. Moreover, if more puppies test positive for distemper then we will need even more funds. My pups need a place to stay, someone to tend to them 24*7, medicines, routine checkups, tests, physiotherapy… the list goes on.
I need your help to get through this. The funds you donate will give my puppies a fighting chance. And I believe everyone deserves the chance to fight.