After Losing Their Parents, Brother Is Struggling To Save His Sibling | Milaap

After Losing Their Parents, Brother Is Struggling To Save His Sibling 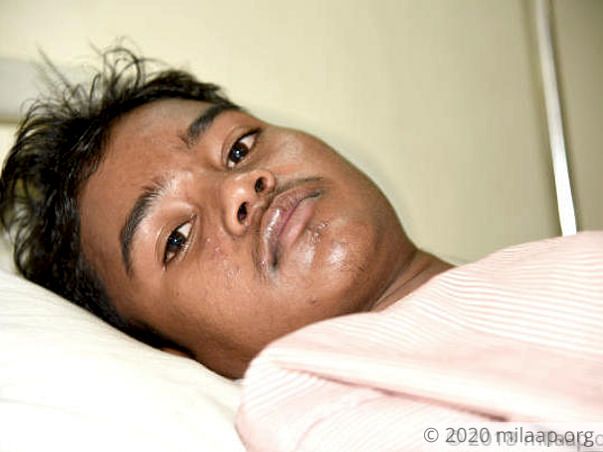 It has been ten years that their parents have passed away and ever since then 25-year-old Gandur Baraik has been looking after his younger brother, Dhaneshwar. Gandur had to leave his studies mid-way owing to his parents’ sudden death due to heart ailments. The responsibility of his brother fell on his young shoulders. Life has never been easy for both Gandur and Dhaneshwar. It took years for Dhaneshwar to overcome his parents' death and just when he started planning for a better future, he was diagnosed with cancer. Now, Gandur is single-handedly struggling to afford his brother's treatment.

“One year ago Dhaneshwar was down with a severe fever. He was also feeling giddy and could hardly get up from his bed. I took him to the doctor. When the test results came out, our worst fears came true- Dhaneswar was diagnosed with cancer and he needed chemotherapy immediately.” - Gandur.

17-year-old Dhaneshwar is fighting chronic myeloid leukaemia. It is a type of blood-cell cancer that begins in the bone marrow. It's caused by a chromosome mutation that occurs spontaneously. It can quickly spread into the blood and other body parts as well.

For the past one year, Dhaneshwar has been tied to his bed - he is too weak and even little tasks like changing clothes and taking a bath tire him out. All his life he has been a good student and now the fact that he can’t go to school and continue with his studies saddens him a lot. He is a fan of cricket and used to love playing with his friends. Now all he can do is watch the matches on the mobile when his friends come over to visit him. He desperately wishes to go back to his normal life but he is getting weaker by the day because of the deadly disease.

Gandur deep in thoughts worrying about his brother's treatment

Gandur works a helper in a hotel in Ranchi and earns around Rs 7500 per month. He is married and has a 1-year-old son. Gandur has been single-handedly taking care of his family and also his brother’s treatment. He has been having a very hard time trying to manage everything and has already spent a lot by borrowing from his friends. But now, he is completely out of money and he would have to stop his brother’s treatment unless he gets help.

17-year-old Dhaneshwar is fighting cancer and needs chemotherapy to recover completely. His brother is trying very hard to arrange for money to continue his treatment but is unable to do so. Your generous contribution can help Gandur save the life of his brother and bring back happiness in their life.

Your support can bring back this teenager's smile 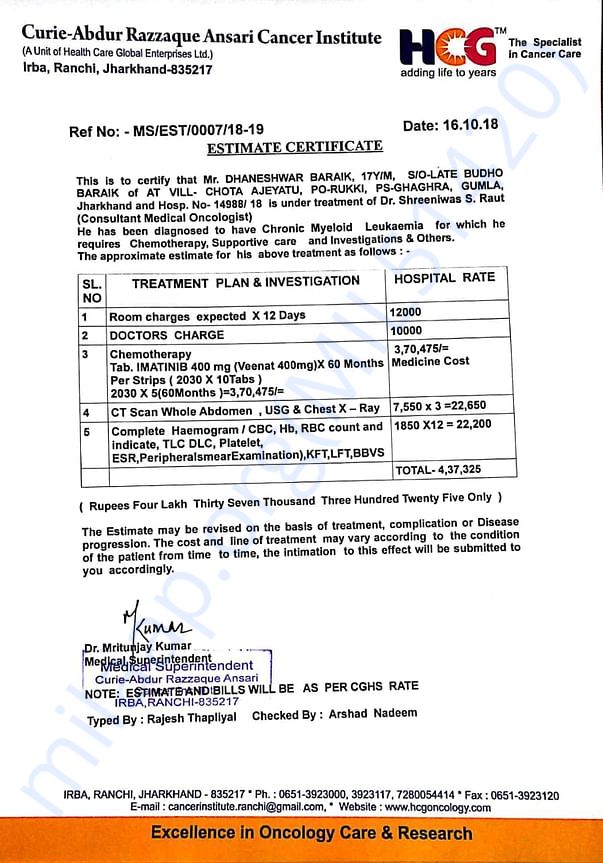 Dhaneshwar is doing well. Patient is currently on oral chemotherapy and is recovering slowly. We shall keep you posted.

Dhaneswar received his 2nd cycle of chemotherapy  today. He responded well and is doing better. His next chemotherapy is scheduled after 3 months.

Thank you all for coming forward and helping him. Please continue supporting and sharing the campaign.

Scan & donate with any app
check_circle_outline Download payment receipt
Report fundraiser
Know someone in need of funds for a medical emergency? Refer to us
Rs.115,238 raised

I wish from my heart for your speedy recovery

May God bless you brother...

I wish from my heart for your speedy recovery

May God bless you brother... 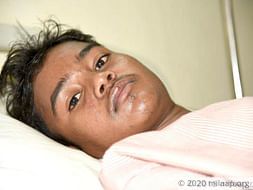 After Losing Their Parents, Brother Is Struggling To Save His Sibling