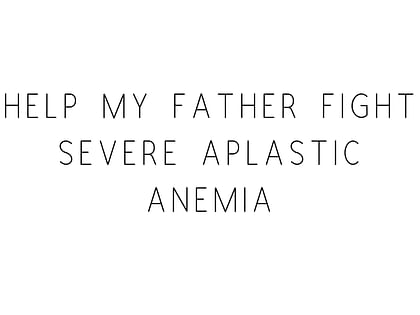 Share
My father is suffering from "Severe Aplastic Anemia"(SAA). It is a type of anemia. The term "anemia" usually refers to a condition in which your blood has a lower than normal number of red blood cells. In people who have aplastic anemia, the body doesn't make enough red blood cells, white blood cells, and platelets. This is because the bone marrow's stem cells are damaged.
Due to severe fatigue, he was first admitted to Apollo Hospital, Mysore where the doctors suspected this might be a case of SAA. For second opinion, BGS Hospital ,Kengeri was suggested. After a couple of tests, it was confirmed that he is suffering from SAA and suggested Fortis Hospital Bannerghatta Road Bangalore for further treatment.

Currently, Anti-thymocyte globulin (ATG) is being given which alone costs around 4 - 5lakhs.Tablet - Eltrombopag tablets used for the medication costs around 35- 40k per week and needs to be given for a long time and requires blood and platelets transfusion every alternate days. The total bill is estimated to be 20lakhs.

Please help my father any amount of money shared will be of great help.
"Helping hands are better than praying lips."