This Driver Has Only 3 Hours To Save His Daughter From Liver Failure | Milaap
This campaign has stopped and can no longer accept donations. 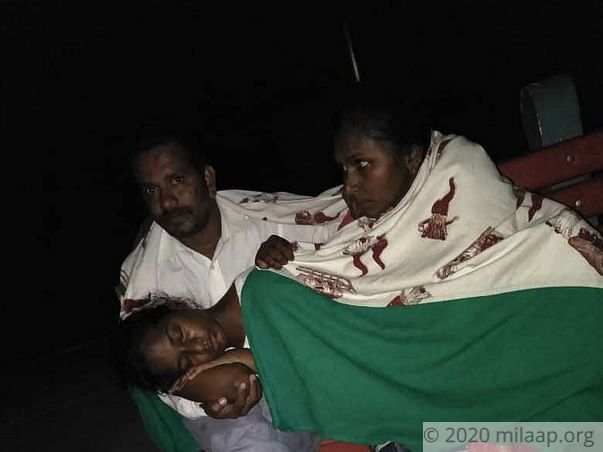 Devapriya’s liver completely failed in just a few days. She’s been in the ICU on ventilator support - It’s been one week since she woke up. Now, time is running out. With less than 3 hours left for her to get a liver transplant, her father, Kumar visits her in the ICU. He fears this might be the last time he sees her. Kumar is a matched donor. All the tests are done, Devpariya is ready for the transplant – but Kumar just can’t afford it.

“I have done everything I can this past week. Only a miracle can save my daughter now.” – Kumar, father

Devapriya hid her pain from her parents for weeks

We all know someone that can strike a conversation with almost anyone – Devapriya (15) is one such girl. A class 9 student, she’s cheerful and enthusiastic. Her parents, Kumar and Beulah, are like friends to her, with whom she could talk to about anything. However, Devapriya chose to hide one thing from them – the pain she started having in her stomach towards the end of January.


“She said she didn’t want to worry us, so she didn’t tell us for almost 2 weeks. The pain only increased and she could barely walk. She had fever. That’s when we were told it was Jaundice, but within weeks, her condition deteriorated. Last Tuesday, she was taken to the ICU for acute liver failure. I wish she had told us earlier, maybe we would’ve had more time to save her.” – Kumar

Kumar works a driver, and Beulah, a domestic help.  With their income, they were able to support their two daughters’ education and run the house. They have no savings, nothing to lean back on. Now, Devapriya’s medical expenses are only piling up. They have spent over Rs. 70,000 so far with help from family, they could not even get her admitted to the hospital without help.

The next 3 hours are crucial for this 15-year-old. Devapriya will not make it without your help. She needs the transplant in less than 3 hours to survive this dangerous disease. Her parents have nothing left to save her. You are their only hope now.

Your support will give this teenager a second chance at life. 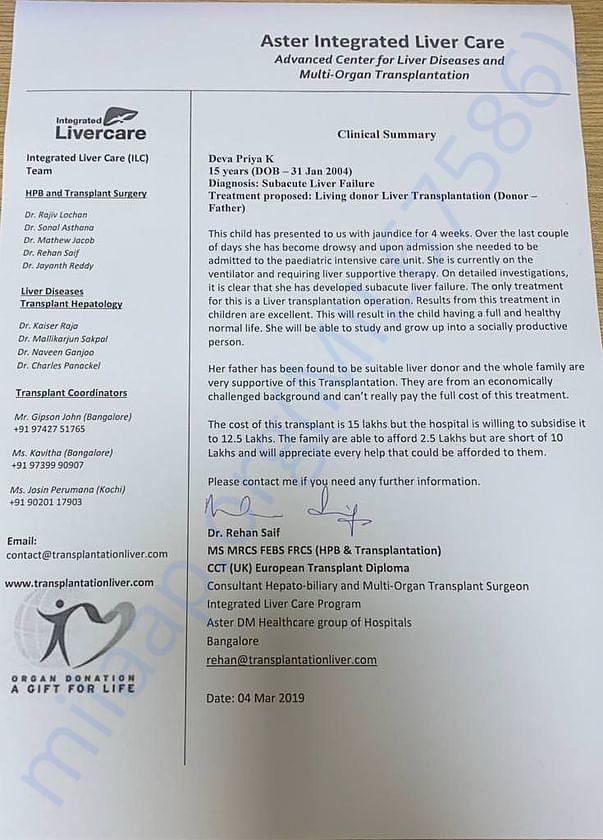 Devapriya is no more with us. She was undergoing her treatment but her health deteriorated and she couldn't make it.

Report fundraiser
See how thousands are crowdfunding for their causes on Milaap
Rs.3,300 raised

Donated to this campaign via Paytm? Click here if you can’t find your donation listed below.
A
Anonymous donated Rs.2,000

God will help to heal your child

Donated to this campaign via Paytm? Click here if you can’t find your donation listed below.
A
Anonymous donated Rs.2,000

God will help to heal your child 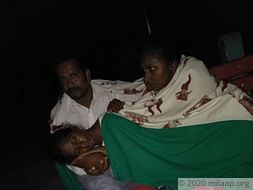