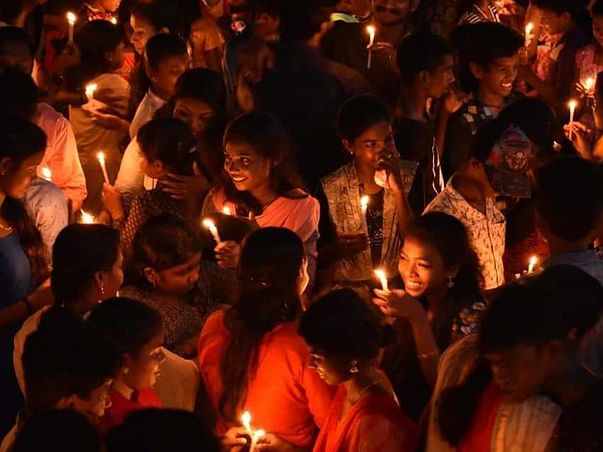 Dhisha is a nonprofit organization of socially committed youngsters of Kerala registered under the societies act, 1860 with its Reg.NO. MPM/CA/294/2015.The organization was founded by DinuVeyil at the age of 19 by realizing the pain and agony faced by the various marginalized and oppressed communities of the nation. The Founder DinuVeyil realized the need for an organization of youngsters which act with compassion as its ground block, through his volunteering experiences while he was a student of Integrated Humanities at  IIT Madras. His experiences in interacting with the children of Adayar Cancer institute who were denied of their colourful childhood due to the long term life-threatening diseases, the eye-opening insights while engaging at providing love and care for the aged at the Navaloor Hospice center, and his extensive engagements with the day to day interaction with the Dalit and Adivasi communities made him realize that the life becomes more colourful when we could spread smiles among the people who suffer from pain and oppressions. Dropping out his course from IIT Madras, he started a network of young students who volunteer for social causes. The organization has been involved for the past 6 years in serving society, especially the most downtrodden with more than 100 volunteers in the state across the districts. The organization is having Ms.Sheeba Ameer, CNN –IBN Real Hero award winner and social activist, as their patron. Further, the organization has an advisory panel including Retd.Justice SiriJagan, Writer Sara Jospeh, Padmasree Meenakshi Gopinath, Dr.K.M.Sheeba, etc.

The six wings of Compassion, flying for the Needy
The activities of Dhisha ranges from the right based social activism to promoting the education of the students who are deprived of access to quality education due to their lower socio-economic status. The organization has been working towards eliminating various forms of discrimination and to form an array of powerful young minds who uphold compassion and democratic consciousness. The activities of Dhisha are broadly classified under six wings.

The first wing of Dhisha titled as Oppam aims at engaging at the education of the students from marginalized communities and poor economic backgrounds. In the pandemic situation, the wing Oppam engages at providing Digital devices to the students and also provides educational scholarships on a monthly basis to the smart students from the said vulnerable backgrounds. The wing Oppam also tries to build up libraries and to renovate the libraries at the Tribal and Dalit colonies and other special homes for the needy. The Legal cell of Dhisha engages at Providing free legal aid to the marginalized identities such as Dalits and Adivasis, Women, Children, Transgender community, and the Students. Various cases were filed by the organization infront of both judicial and Quazi judicial bodies. The wing also extends in activities through spreading legal literacy among the student community and the common public of the state through various awareness programs. Dosth is a wing of Dhisha which tries to bring and follow up the social issues in front of the bureaucratic authorities. The wing further acts as an information desk for all individuals who are in any form of personal as well as a social crisis. The wing also assists individuals in applying for and to follow up regarding their applications into government schemes. Life drops ,the Blood donation and Co-Ordination wing of Dhisha which has Co-ordinated more than 5000 blood donations in the past six years. The Academic and research wing of Dhisha engaged in both minor researches for understanding social issues and  has recently started an online certificate course on the Indian constitution and the Rights of the citizen's. Finally the Cultural wing of Dhisha engages at Promoting folk arts and engages in various socio-cultural activities upholding  the motto, Art for activism.

The organization received the Karma Award for the best social activist group of the state in 2015 by the MKR foundation with a jury committee chaired by renowned writer Padmasree MT Vasudhevan Nair. Further, the founder, Dinu received the K.V.Anoop Memorial KalalayaPuraskaram in 2017 for his engagements as a young social activist among the campuses of the state. In 2020 the founder received Sahas Youth Award, initiated by WISCOMP a south Asian organization under the Holiness Dalailamas Foundation for Universal responsibility for promoting gender justice and engaging at social activities and building a big network of socially committed youngsters.

Your Donation Bring Smiles
This annual fund raising event of Dhisha is being hosted to seek financial assistance from the compassionate people around the globe to support Dhisha to reach more people who are in need of support. This Fundraising primarily aims to continue providing digital gadgets to the students who are denied online education due to a lack of digital devices. Secondly, the amount you contribute will be used as a resource for supporting the education of the selected students in the form of monthly scholarship, who especially ails from the socio-economic backward conditions. Thirdly the donations would also contribute towards fighting the legal battles for the various oppressed communities and individuals of the society whose rights are been infringed. Fourthly the amount you contribute will be promised to use for other relevant day to day activities of Dhisha. We assure that each single rupees you contribute will be used justly for bringing smiles and lights in the life of the most underprivileged individuals who live their lives in misery.
For any further information about Dhisha please feel free to contact us at dhishakerala1@gmail.comPlease ring us at Dinu.K -9446666792   Anagh –9446491723   Depthara Suresh -9562915812