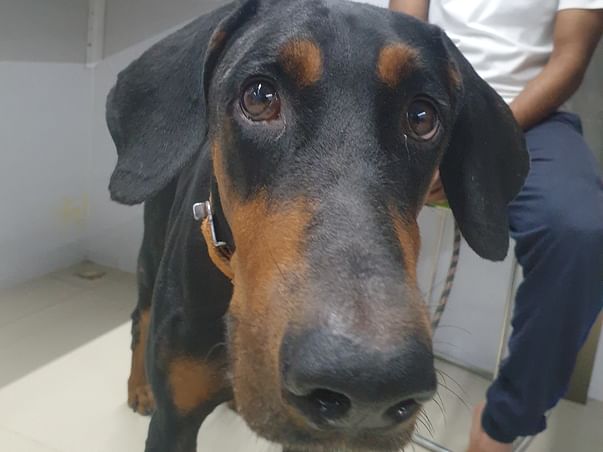 Share
We found CHIEF, a pure breed Doberman, on 13th August 2019 roaming around Kartik juice centre, Cypress, Mulund. He was found without a collar and in a really bad state, rummaging through rubbish. He was abandoned and left to die alone so we took him in instantly.
It's been 27 days since we've found him but no one has claimed or given any information about this case.

13 August 2019 -
On meeting Chief, we could see that his right leg is injured and so he was limping and couldn’t keep his leg down, had severe skin issues and had loose motions. He was drenched in the rain and cold when rescued.
As he needed immediate medical attention,we took him to a vet a couple of times. As of now, these are his reports:
- His diarrhoea was brought under control.

- Further treatment for his skin was started from 22nd september (suffering from mites)- Blood test reveals low platelet count and his liver values are on the higher side. Treatment for both these issues was started. -

Cheif's Thyroid check result - Free T4 on him is Low and suggests Hypothyroidism which possibly was contributing to skin issues too.

-Even after treatment had started and Chief was fed nutritious meals, he wasn't gaining weight, which was a cause for concern and confusion. But on 29th september we found out why - he had swallowed a huge polythene bag and cloth which was in his stomach till now causing issues! We found this when he puked it out of his system.

Poor guy was soo hungry he went ahead and ate pretty much anything he could find in the dumpster. This is the plight of most animals on the road, and it is heartbreaking.

He was ok and active throughout the day and was discharged at 9 pm. He is now at a paid foster in Mulund and is been monitored closely for relapses.
Further diagnostics to be done are CSF tap and MRI to confirm the diagnoses.


Chief didn’t deserve this to happen to him. For no fault of his own, he was abandoned and thrown out out his ‘home’ and left to die. Why else would someone in their right mind abandon their pet? Domesticated dogs, specially pedigree breeds cannot survive on the street and other packs of dogs attack them. They do not have the instincts to defend themselves and don’t know how to find food.
Let the story of CHIEF be a cautionary tale for people who want to adopt pedigree breed dogs and are unable to take care of them, as well as adopters who are hasty in their decision and end up abandoning the dog because of too much responsibility.
If you are reading this and looking to get a dog home, please understand what it means to have a dog and what kind of a commitment it is. Abandoning your dog is NOT the solution. Please reach out to a vet or NGO if you are having problems with your dog, and have some patience.

We intend to nurse Chief back to health and tackle every health issue this young boy is suffering from. He seems to have been through a lot and hasn't got proper nourishment, but is a tough champ and a CHIEF (thus his name!).
Once he is better, he will be up for adoption to a loving home, who will finally teach him what it really means to have a ‘FAMILY’.
But that is a long time away and his journey to recovery seems tough.
Can you please help us raise funds to help him get better?
His medical costs include - (all the below Bills are pending)

We can provide any bills and references for the above expenses, incase you would like to donate towards Chief’s recovery. Please open your heart and help this baby out. He deserves so much more, because of what a gentle soul he is.