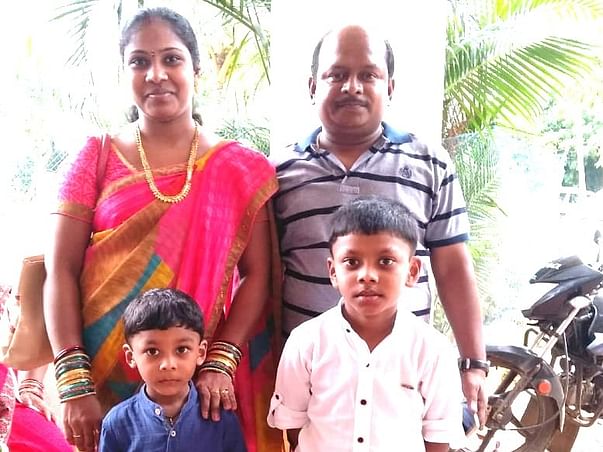 Imagine what will happen to you when your only  earning member of your family leaves you forever. Let me tell the real life story of  our beloved Jagannath patro. Jagannath hails from a small town in Ganjam district of Odisha in India. Struggled a lot to find a job. After a lot of efforts he could make an entry into a healthcare company and served from core of his heart, so much so that he didn't change his job till date for 20 YEARS. He was able to maintain his family consisting of his parents,  wife and two young children of age 6 and 10. Suddenly his life took a U turn. He lost his mother after lot of health problems in 2019. His father just survived a major health issue in 2020. Now it was Jagannath's turn. With his medical knowledge,  lot of family members survived covid including his father,  wife and cousins. But in serving them , he himself got affected by covid on 9th June 2021 and succumbed to death on 25th June 2021. We are raising this funds on request  of Jagannath's close friends to secure the future of two little kids JAGDISH , JIGNESH, wife Jayasmita and aged father.
Here is his full story of his fight for covid :
He was admitted to an excellent hospital in bhubaneswar area. The doctors and medical staff gave their 100%. He was recovering from a oxygen support peak of 30 litre to oxygen support of 3 litre,  about to come back  home on 22nd june. But unexpectedly  his health situation detoriarated and his immunity could not fight the tough battle this time, his oxygen saturation dropped from 93 to 80, then below 50 within a span of 8hours on 24th june night and he succumbed to death on 25th June 2021 morning  inspite of best efforts by doctors, medical staff. He was a selfless man. Now he has left behind us with  two small kids, wife and his old aged father. He fought the battle bravely and despite of every possible effort he succumbed to covid. His untimely death not only brings havoc of pain and agony to his family but also left them financially devastated. It is the most difficult  for a father to see  son die in early 40 in front of his own eyes, wife to see his beloved leaving her in her early 30 and kids asking why father is not coming home. Even though we can't fill the vacuum space created by him but our little moral support will definitely be a helping hand for his family.