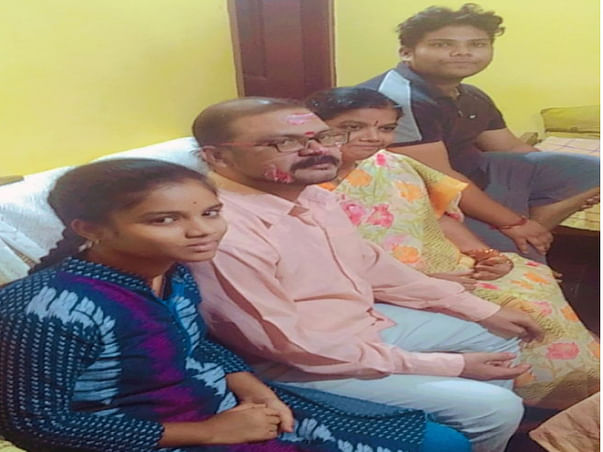 Boga Srinivas, a loving husband, and the father of 3 children passed away on the morning of May 24, 2021 after a prolonged battle with Covid at Gandhi (Govt.) Hospital, Hyderabad. He was struck with Covid on May 15th, But he had put brave face to fight back Covid-19 in Government hospital despite he couldn’t afford private hospital treatment. He left this world at age of 49 years, a life full of dreams for securing his children was brutally cut short. He is survived by his wife Boga Ramya Sree, One son and 2 daughters (17 years aged Venkatesh pursuing Diploma 2nd year, 16 years aged Pranavi pursuing Intermediate 2nd Year and 14 years aged Namratha pursuing SSC).

Boga Srinivas was initially a weaver at his native village. Later he had moved to Hyderabad for meeting basic needs of his family. Currently, He along with family resides in rental house at Ram Nagar, Secunderabad. He was buried in huge debts by investing in Welding Shop. Later opened a Fast Food Centre by taking Gold Loan which also ended in loss. At last joined as Cook in food canteen at Nalla Narasimha Reddy Engg College, Narapally, Hyderabad till death. He is the sole bread winner of the family. His wife  has not dealt with the biggest loss of her life yet and she is still clueless about how to meet daily needs and rental house cost along with 3 children. Moreover, she is really concerned about safeguarding their future.

We sincerely hope and pray that no one goes through the pain and suffering that Boga Srinivas’s family is facing today. The loss of an earning family member is incredibly hard and currently his wife Ramya Sree literally has no means to run the family of 3 children, their education costs and clearing her family debts.

Boga Srinivas was an amazing friend as well as a very good human being and won the hearts of all his colleagues. We will not be able to bring back Srinivas to repair the loss, but at least we, the friends and colleagues would like to join our hands in helping his family in our own ways towards financially securing the future of his 3 innocent children, at least to some extent.

We are really obliged for every contribution during this difficult time.

No contribution is big or small - please do whatever you can to help.
How the funds will be used:

The entire contribution will be directly transferred to his wife’s bank account for meeting her children needs and education.