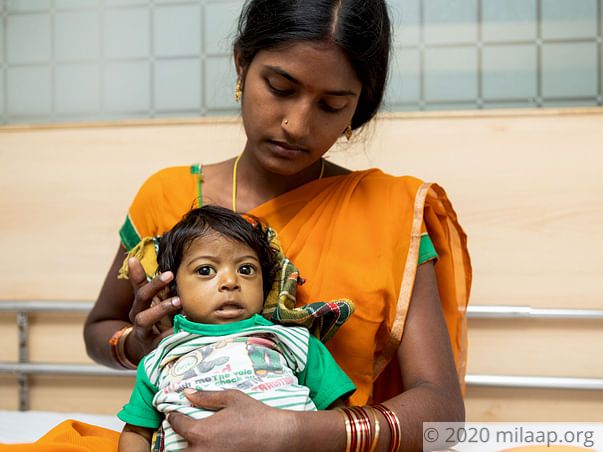 "I had lost hope when his first surgery was unsuccessful. Even as the doctors assured me that my son can live a long healthy life with a liver transplant, I knew I could not afford it. I took my son and went home. But the hospital did not give up. They are still making sure he has a chance. I thought I had to watch him die until this hospital and other patients started fighting to save Bujji. ” - Ganga Raju

Bujji's liver has been failing since birth

On 16th August 2018, lorry driver Ganga Raju drove straight to the government hospital in Makavarapalem, AP. His wife, Sarojini, had just given birth to their second child. They fondly called this baby boy, Bujji. When he was just 2 months old, their daughter, Sirichandra (4) kept saying that he looks yellow.

“We did not think much until his stomach kept bloating up. It was scary. At a hospital in Rajahmundry he had an urgent surgery for his liver problem. I thought that was the end of it but it failed.” - Ganga Raju

This baby can survive and his hospital is not giving up

The hospital advised the family to go to Hyderabad where they learned Bujji needs a liver transplant to survive the disease. He was born with biliary atresia, where his bile duct was blocked. The surgery could have helped if done before he turned 3 months old. Dejected, the family went home as they could not even afford to live in the city.

“The doctor did not give up. The staff at the hospital called and advised us to apply for CM funds. 'Help will come,’ they said. ‘You can't let your son die.’ I found hope because of them.” - Sarojini

Even with CM funds, they are running short

As the family waited 2 months for CM funds Bujji was admitted at a government hospital in Vishakapatnam to keep the baby boy from getting worse. None of their friends and family helped. A few days ago, they received 10 Lakhs from CM funds.

“After we got the money, we came back to Hyderabad. I cried to the doctor about not having the rest of the money. Even then he said, help will come. Right now Bujji's condition is getting worse. He keeps crying. I can tell he is in a lot of pain. They keep removing that water accumulation in his stomach.” - Sarojini

Everyone has done their best, your help can save Bujji

The hospital started this fundraiser for Bujji. Other patients who have been seeing this family the waiting hall for months, have been buying them food every day. Ganga mortgaged his house and took a loan to pay Rs. 4 lakhs for the first surgery and treatment so far. He still needs Rs. 17 lakhs to save his baby boy.

“They all say the same thing. If there was no cure, it would be easier to let go. We know this transplant can save him. My wife is willing to donate a part of her liver.  The kindness of these strangers gave me strength to ask for help.  If you don't ask, nobody will help you. Please, I ask you to help save my Bujji.” - Ganga Raju

The plight of this family is so saddening that even passers-by are vested in their cause. 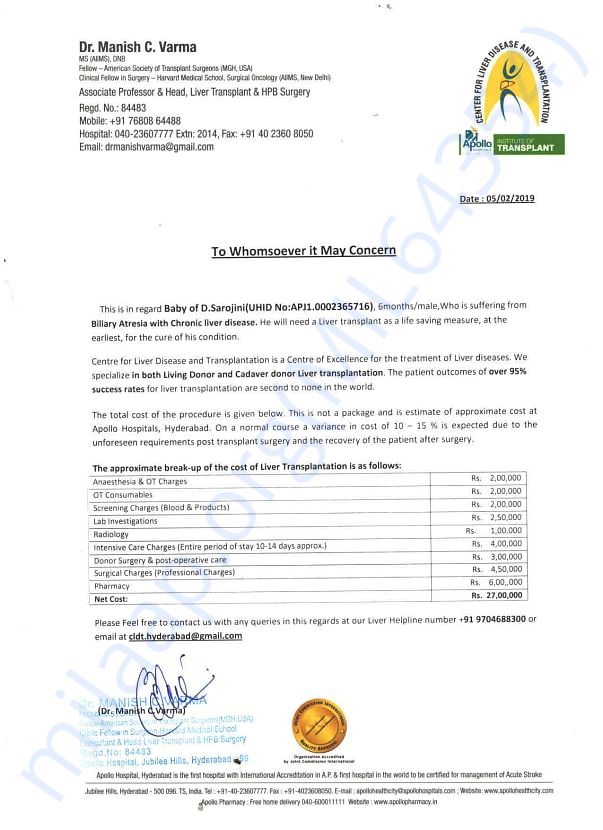 Baby of Sarojini has successfully undergone the liver transplant and now he is undergoing post transplant treatment. He is recovering.

Report fundraiser
See how thousands are crowdfunding for their causes on Milaap
Rs.318,488 raised 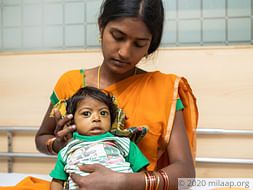