This Baby Girl Needs Help To Fight Aggressive Cancerous Tumour | Milaap
This campaign has stopped and can no longer accept donations. 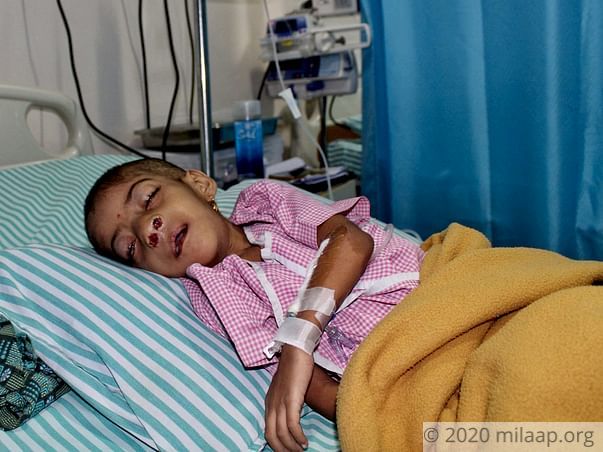 “Amma, I can’t see anything,” said baby Charitha, her voice quivering, as she held her mother’s hand tightly. Anusha told her that everything will be fine soon, but her terrified face said otherwise. She didn’t understand what was happening to her child – why she suddenly couldn’t see or why her nose was so swollen. What started as a regular fever, quickly something far more dangerous for this 2-year-old who is now fighting an aggressive cancerous tumour.

“It started in her nose, and within days, spread to her eyes and throat. She hasn’t been able to open her eyes in two months now. She couldn’t talk or eat anything. She’s only 8 kgs now. It’s the most heart-wrenching sight to watch her lying in bed, so weak and helpless. She looks nothing like she used to, she’s become so unrecognizable. Cancer has ravaged her and left her in terrible, terrible pain. Her happiness, her smile and every once of her energy is now gone.” – Anusha, mother

With her resilience and timely treatment, she’s slowly improving

The tumour had grown so much, so quickly that Anusha and Vinay thought they would lose her. However, once they started her treatment with whatever little they had saved, they found hope again. With chemotherapy, Charitha is now slowly able to talk and drink liquids. She craves for chocolates and home food, and that’s all she ever asks for. She doesn’t understand what’s happening to her or why, in just a few days, her life completely changed.


Baby Charitha before she was diagnosed with cancer

“She was so active and cheerful, playing with everyone around our house. We were living such normal lives. We live in a small village and our days were mundane, but my husband and I never complained. We were happy, and Charitha’s smile was enough for us to forget our worries. Yes, we didn’t have much and our crops were not thriving, but we hoped for the best. No parent ever imagines that their child would go through something like this.” – Anusha

But failed crops have left this family with a few hundreds to live on, her treatment is beyond their means

Six months into the year, and Vinay knew that he was in for a tough year. His crops were failing, and the lack of rain only made it worse. He barely earned anything, and instead of wallowing in his sorrow, he began to prepare for the next year. But for him, none of his struggles compared to what his daughter is now going through. His daughter’s diagnosis left him devastated. He didn’t know how he would even start her treatment.

“We had saved a little bit for her education, we started her treatment with that. I’ve hardly earned around 15,000 this whole year. I can’t imagine arranging 9 lakhs for her treatment. My only wish is that my daughter is cured, I pray that she opens her eyes soon.” – Vinay

You Can Help Charitha Fight Cancer

Charitha needs chemotherapy for another year to be free from the pain and misery of cancer. Her smile, her energy and her childhood can be returned to her with your help. She has stayed strong despite the excruciating pain, and can make it with timely treatment.
Estimation letter 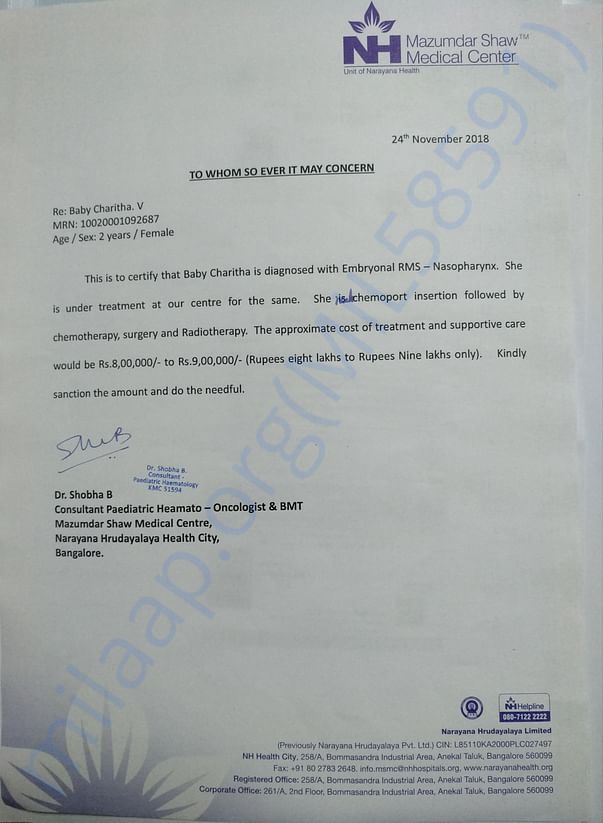 Charita has completed her chemotherapy and is doing better compared to earlier. She is back home now.

We would like to thank all the donors who has supported for her cause. Without your support this would not have been possible.

Charitha is still in the hospital and is continuing her treatment. As of now she has completed six months of treatment.

Do keep her in you prayers.

Thank you so much for the help and I  greatly appreciate the support you have shown towards my daughter.

Baby Charitha has completed 7 cycles of chemotherapy. Doctors have planned to do MRI and PEST scan on 29th of January. They have informed that, total of 52 chemotherapy will be done in one year. There was some problem with the vision and she is able to open her eyes now.

I once wish to thank you so much for your generous donations.

Report fundraiser
See how thousands are crowdfunding for their causes on Milaap
Rs.1,392,601 raised 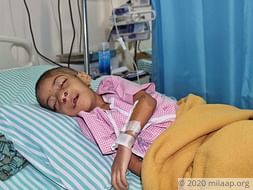