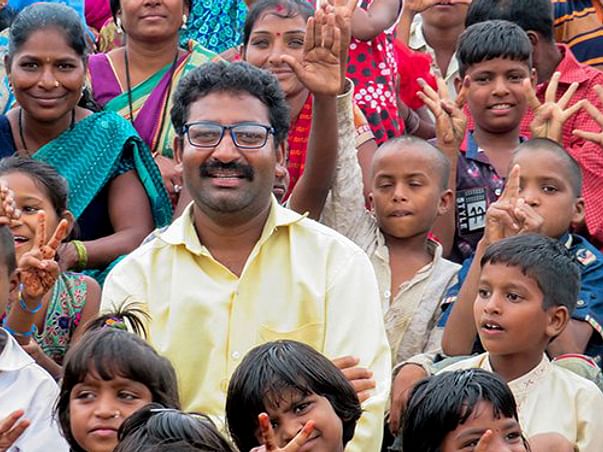 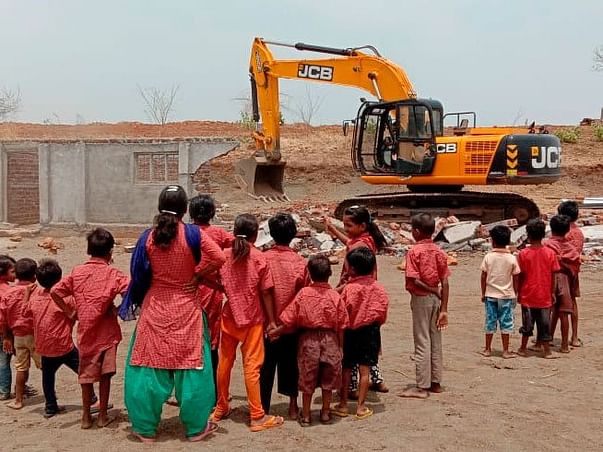 Previous Next
On June, 6, 2019 Prashnachin Adivasi Ashramshala (Question mark tribal school) demolished as to make way for Maharashtra Government's Prosperity Highway’ project. Prashnachin Adivasi school was founded by Matin Bhosle of Phanse Pardhi, a denotified tribe.  This school provided free education to 450 kids. These kids mostly belonged to Phanse Pardhi Adivasi community and some from Korku Adivasi community.  Located beside a narrow deserted pathway in Nandgaon Khandeshwar taluka of Amaravati district, the school provided kids with two meals a day, books, uniforms, and even basic amenities for their hygiene.  Kids from class 1 to 10 received unhampered education at Prashnachin Adivasi Asharamshala (Question Mark Adivasi School).
A 2017 survey revealed that 38 % of Phanse Pardhi community kids dropped out of primary schools. One of the reasons was discrimination.The school consisted had a wonderful library with 2000 Marathi books on Gandhi, Phule, Ambedkar, world history and more. The parents of the kids studying at the Question Mark school were also worried about the future about the future of their children’s education. Surnita Pawar, 36, member of the Phanse Pardhi expressed, “My daughter Surnesha completed Class 10 in this school. Now she is doing a correspondence course for Class 11.” Surnita works as a farm labourer in Mangrul Chawala, a village of 3,763 people adjacent to her settlement. After the demolition, when I phoned her, she said, “I heard that the classrooms are destroyed. Surnesh [my son] is in Class 5 there. He was home for the summer vacation. Where will he go now?”
The school’s demolition was sudden and to add to the misery, the compensation that the school deserves as per the law has been denied too. Matin along with 50-60 students has marched to collector’s office thrice and even went on a hunger strike only to dismally meet defeat in the end.
"Pardhi children are still not really accepted in ZP schools. Where is the right to education for them? And the Maharashtra government has not provided enough residential schools [for Adivasi children]. How will they progress then? All these are the Pardhis’ questions – with no answers. So this is the ‘Prashnachinh [Question Mark] Adivasi Ashramshala. We have suffered ‘questions’ of discrimination, rejection, a lack of basic facilities. When we found ‘education’ as an answer, you [the Maharashtra government] have placed this new ‘question’ of displacement before us. Why?” - Matin
The school is managed by the Adivasi Phanse Pardhi Samiti which is run by Matin Bhosle, the founder of the school. There is a scarcity of resources at the moment. To run the school it take a cost of Rs. 4,00,000. Normally, Matin would go to the nearby urban cities asking for donation but now he is busy battling for compensation. The campaign will help him to sustain the school for another month. By the time, he hopes to receive the compensation for the demolition of the school. As the school walls lie in the dust. Matin still holds classes in makeshift rooms of tin and the school’s hostel.  All it took as one swift motion bulldozer to demolish the education of these kids.  With each classroom wall going down, their constitutional Right to Education got buried in the debris too…
Let’s save this spirit of education…
I want to start a crowdfunding campaign to help save the school. It’s the power of education that uplifts the trampled communities and shapes the future of a nation.

UPI: rzpy.givetomlpayushi00002@hdfcbank (Copy to clipboard)
Or
Click here to read the instructions before you make a bank transfer.

The story was reported by People's Archive of Rural India 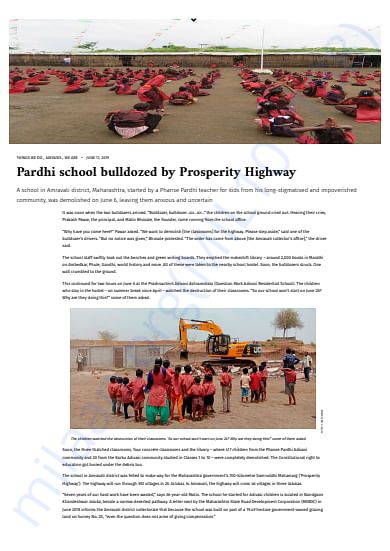 UPI: rzpy.givetomlpayushi00002@hdfcbank (Copy to clipboard)
Or
Click here to read the instructions before you make a bank transfer.

Ask for an update
Donated to this campaign via Paytm or bank transfer? Click here if you have not received an email confirmation from Milaap.
Dear Donors,
In the current Covid Crisis we are facing major shortage of supplies. Unfortunately, the water shortage in our area has left our water pipes and throats dry. We barely have enough to manage water for food and drinking purposes.
In times of Covid-19 hygiene and sanitation for our students is essential but the water shortage has turned this necessity into a dream we long for. Keeping in mind the healthy of our students we are urgently arranging resources to ensure a steady supply of water. New water pipes are to be laid down. For which we are utilising a portion of the funds raised.

Thank you for your constant support towards the campaign. 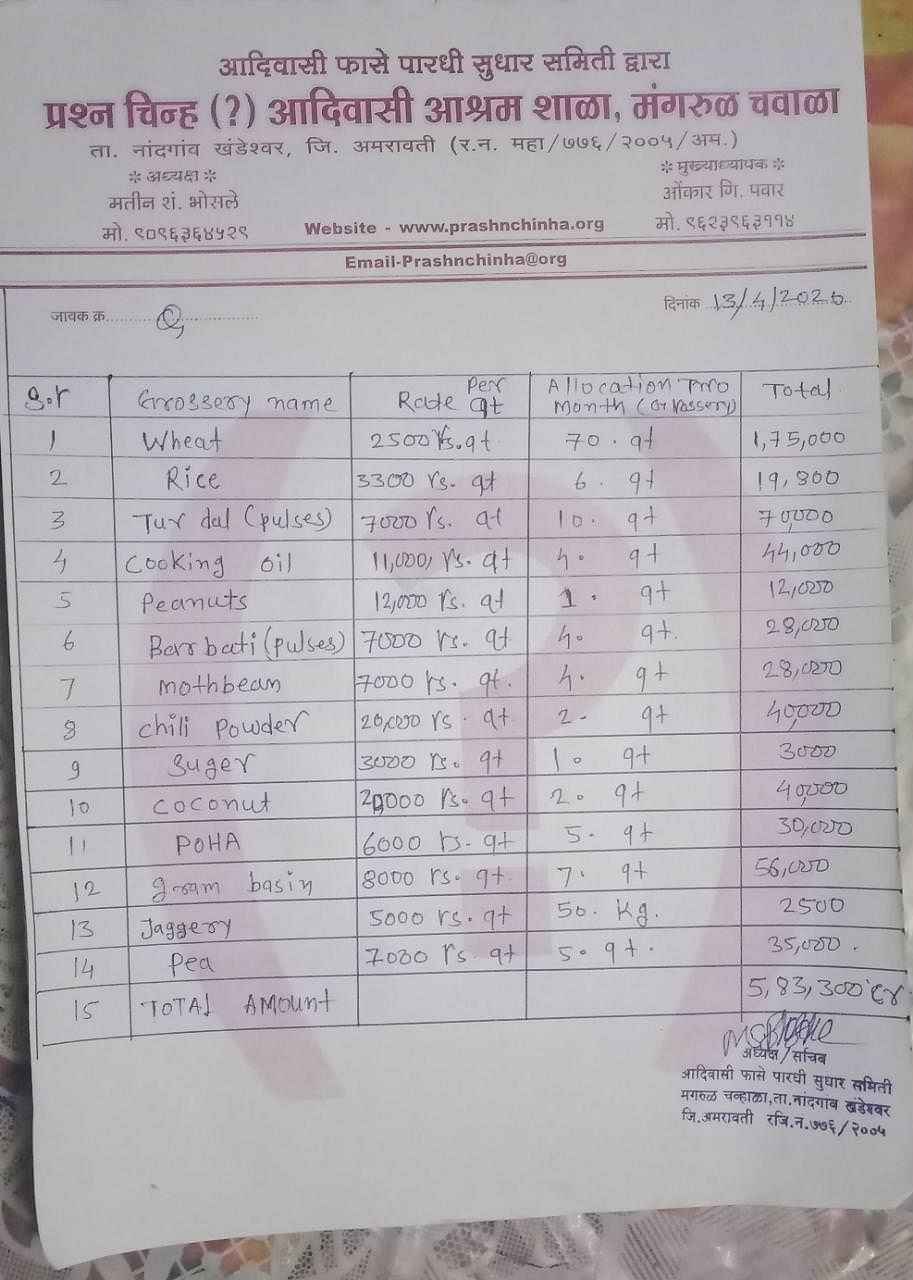 Dear donors,
As a consequence of the pandemic Prashnachin Adivasi school has been shut. However, many orphan students are finding shelter in the hostel. Covid-19 forced our resources to shrink. The ration storage is nearly empty now. A portion of the funds, Rs. 6,00,000 withdrawn will be used to feed the children staying in the school as they got no where else to grow.
Money is transferred to the school's trusty and founder Matin Bhosle's official accounts.
The funds will be used to buy ration grains like wheat, rice, lentils and vegetables for a month. The attached image shows the utilization of funds in a detailed manner. For further queries do reach out to usWe will soon post you with the updates of receipts and a more detailed utilization of once we receive the said sum to pacify our urgent needs.

As always we are forever grateful for your generosity

Thank you so much for all the support! We are humbled.

As far as progress is concerned, we are in the midst of it. There are loads to build and create so we are able to provide quality education. The condition in which the students are getting educated is in a pathetic condition. There are no classrooms and all that we have is a shelter made of a tin roof. Currently, there are 471 students in the school. All of them come from a very poor background and they need help in every way so they can make their own name in society.

Due to the Samruddhi Express Way, the school building we had earlier was completely broken down. The need of the hour is a proper infrastructure. The girl's bathroom also needs to be build and proper water facility has to be drawn toward the same. We would not be able to do any of this without your support!

Report fundraiser
See how thousands are crowdfunding for their causes on Milaap
Rs.4,243,914 raised

You are sending a message to
Ayushi
Go back 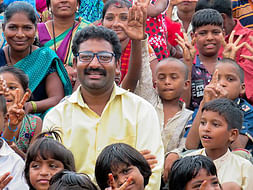