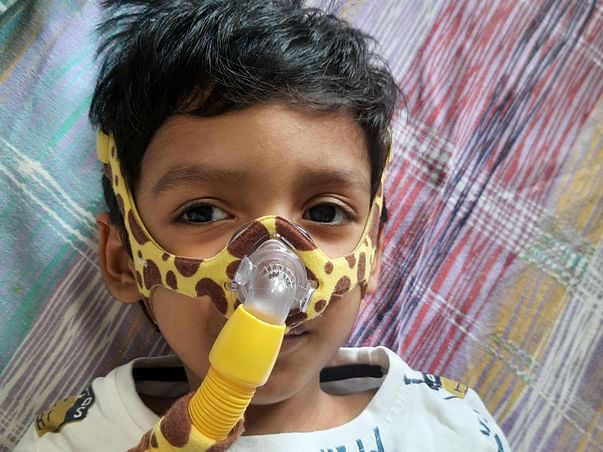 The symptoms were visible for 2-3 months, he was facing a lot of issues with swallow and respiratory, and only after 4-months of his birth, we observed no growth as well as no movements in his body parts. And only later which we realized that he was different from other kids of his age. He only had the neck control and later after 8-months, he lost it too. This raised serious concerns and worries.

We were referred to a neurologist and suggested several tests and diagnostics. After a thorough examination and diagnostics, we were informed that Ayaansh was suffering from Spinal Muscular Atrophy (SMA). We researched a lot about this genetic disease. There is a lack of awareness about it. We had no idea about it until the doctor told us about it. We were shattered to hear the results.

We were told that kids with SMA have a life expectancy of only around 4-5 years. We were told that this disease had a cure but the cost of which 99% of people wouldn’t be able to afford. So we were instructed by the medical team that, he needs supportive physiotherapy which is a crucial part for him as every muscle needs to be worked upon on a daily basis.

He needs daily physio sessions to keep his body organs uncollapsed. He cannot eat any kind of solid food. He's completely relied only on liquid foods. His immunity level is also low that he's prone to repeated episodes of cold & cough and due to which there are high chances of his internal organ collapsing.

The only cure option he has is Zolgensma which costs about INR 16-Crores (2.125million USD). It is a one-time dosage that has to be imported. Ayaansh is a born-fighter and is fighting hard to overcome this genetic disease. He and his family need support and help with the treatment and medication expenses.

Please come forward to support us. Any contribution will be of immense help. Do contribute and share this campaign link with your friends and family.