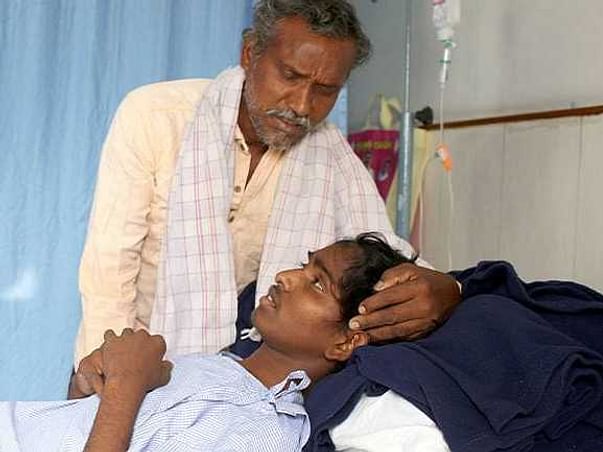 19-year-old  Ashok is suffering from acute myeloid leukemia, a rare type of blood cancer. As a daily wage laborer, Devanna feels ashamed that he can’t provide proper treatment for his son.

Ashok has always been a bright child. He was always interested in studying but because of his family’s economic condition, he never got the chance of studying beyond the 12th grade. But he was never disheartened by all this.

At the end of April, Ashok started to feel weak. He had a high fever and cold. This went on for 12 days and so the parents decided to take him to the local clinic. The doctor prescribed him some medicines, but the fever didn’t subside.

The parents started to get worried about their son. They visited the clinic again and were referred to the city hospital. A few tests were conducted and the poor parents were told, “Your son has blood cancer. He immediately requires treatment.”

The family was devastated when they heard this news. When Devanna gave this news to his wife, Lakshmi, on the phone, she couldn’t stop crying. She cursed her fate as she couldn’t even be with her son to support him. Devanna tried to console her and asked her to be strong for their child.

They started collecting funds for the treatment. They called everyone they knew in hopes of borrowing money from them. They even took a loan from their village collective to pay for the treatment.
The chemotherapy sessions were very painful. It drained Ashok’s energy but he stayed strong. There were days when he would vomit the whole day and beg for all of it to stop but he didn’t give up.

After a round of chemotherapy, the doctors examined Ashok and told the father, “Your son is not responding well to the treatment. We will continue the chemotherapy but he needs a bone marrow transplant immediately.... the transplant will be expensive.”
Devanna is a daily wage laborer. He is in no position to arrange such a large amount. He has already taken huge loans, borrowed money from relatives, and now they have no other source. Since the lockdown, Devanna has not been able to earn.

In these dire times, they need our support. Ashok has always tried to be independent, but today he is helpless. With your donations, you can help him fulfill his dream of becoming a government employee so that he can support his family.