Nazia's online fundraiser for Medical | Milaap
Milaap will not charge any fee on your donation to this campaign.
3-year-old with a hole in his heart needs urgent surgery to survive. Help 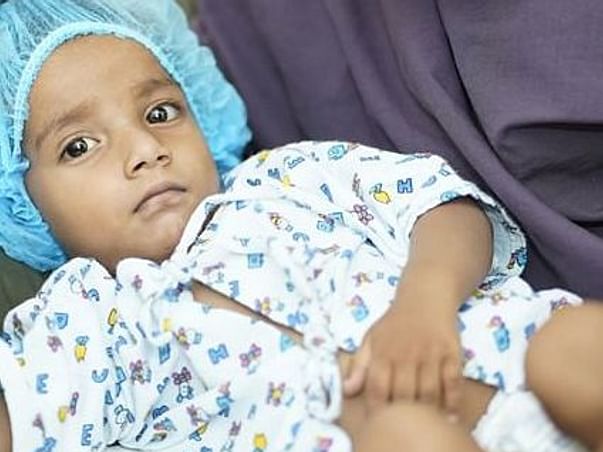 Share
Over the past year, there hasn’t been a day when 3-year-old Shoheb hasn’t struggled to breathe. Despite his endless suffering, the little one has been bravely fighting the battle for life. However now, his heart is slowly running out of time.

“My son’s heart will give up on him any moment if he doesn’t get an urgent surgery. We won’t be able to live if we lose him. But we can’t afford to save him either,” cries Azgari, who has been living under the constant fear of losing her only child.
The little one has been through hell
Back in 2018, soon after Shoheb turned one, his health started deteriorating. “He’d constantly be sick and became very irritable. One day, he got a severe fever. His body was burning so we rushed him to the hospital,” recalls Azgari.

The little one was diagnosed with congenital heart disease- large ventricular septal defect. “One look at my baby and he seems so healthy and happy. But only we know how much he is suffering,” says Azgari.
Because of his disease, Shoheb is constantly in discomfort. Unlike other kids his age, he can’t even play as it makes his condition worse. The little one struggles to breathe properly. He barely sleeps and even refuses to eat or drink anything.
His parents, however, still don’t know the intricacies of his disease. All they know is that his heart will fail is they don’t arrange the funds for his treatment urgently.

Can’t save son with a laborer’s income
Kayyum is already drowning in debt. Ever since his son’s disease was diagnosed, he has taken multiple loans to fund his treatment. His little income goes into running his household and repaying the loans from the past. It’s impossible for him to arrange INR 450000.00 urgently for his son’s surgery.

How can you help?
Shoheb is a lively child. However, his disease is slowly overpowering his life. If he doesn’t get the surgery urgently, his heart will stop beating. Your small donations can give him a gift of life. Please help him.