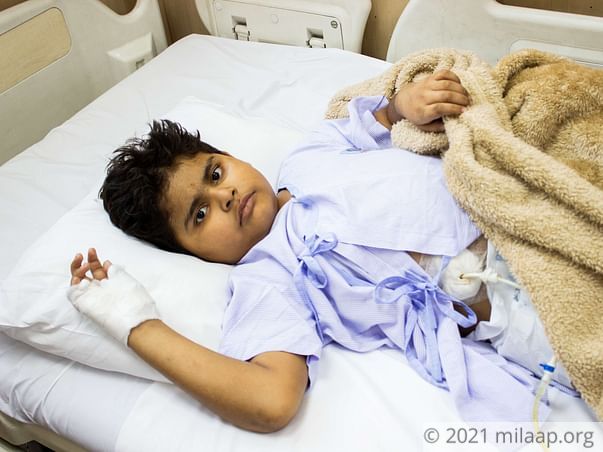 “My son, Arnav would always be so excited about his birthday every year that he would start planning a month before. He would keep asking for his gift and would want to invite all his friends. This year, just 5 days before his birthday, we had to rush him to the ICU. He was and still is in so much pain. Our lives have been topsy-turvy since October. In just a month it was almost impossible for a poor salesman like me to spend lakhs of rupees, but I managed to do it somehow. But now I am left with absolutely nothing,” - Rakesh, Arnav’s father.

2 months ago, Arnav suddenly developed a very high fever. Rakesh had to take him to the doctor after he started shivering. The local doctors gave him antibiotics but instead of getting better, his condition started deteriorating and he was gradually losing consciousness. After taking him to yet another hospital, Rakesh and Preeti found that Arnav had dengue. He was also diagnosed with an infection in his stomach and an infection in his right lung. He had also developed a condition called empyema in which pus gets accumulated in the cavity between the lung and inner chest wall. He has been admitted to the hospital since then.

“My son has already suffered a lot at this tender age. He keeps asking his mother when he will be able to go to school and see his friends again. He wants to go back to the ground and play cricket. He is so tired of being in the bed all day.”

Rakesh is struggling to save every rupee, but still can't afford to save his son

Rakesh and Preeti are currently staying in the hospital in Delhi which is 250 km away from their home in Sadabad, Uttar Pradesh. For more than a month, the parents have been sleeping in the waiting hall and corridors of the hospital. They don’t even have the money to rent a room. Sometimes, they even skip meals to save as much as they can. But none of this is enough to save their son.

Rakesh works as a salesman in a private company. He earns around Rs 10,000 a month. But in just a little over a month, he has already spent Rs 13 lakhs. He had to take a huge loan from his friends and relatives. He tried to get a loan from a bank and his employer but it was rejected. He already is in so much debt, arranging another Rs 15 lakhs is just impossible for him.

8-year-old Arnav has been suffering from dengue, stomach infection and had pus accumulation between his lungs and his inner chest cavity. He has stayed in the ICU for more than a month and he still needs to be in the hospital. His father, Rakesh has exhausted all his sources and has no one to turn to for help.

Your support will help this little boy live