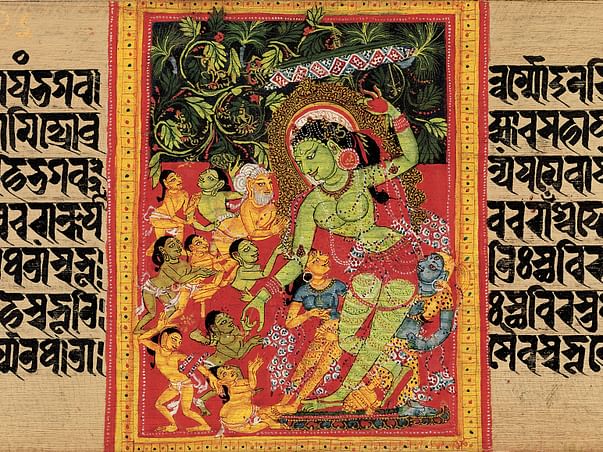 Share
I am Archishman Sarker. I am presently enrolled as a PhD candidate in Visual Arts at the School of Arts and Aesthetics, Jawaharlal Nehru University, New Delhi. Having done my MA in Arts and Aesthetics from JNU, I completed my MPhil titled Hermeneutics of subcontinental art-historiography: The Varendrī region of Bengal (7th- 12th CE) also from the School of Arts and Aesthetics, JNU. Beginning with a historiographical understanding of ancient and early- medieval art and culture of Bengal/ eastern India in South Asian art-history and a study of iconography focussing on artefacts from the region of Varendrī in northern Bengal, which was a centre of artistic and cultural production before and through the Pāla period, I subsequently categorised these objects (collected from field trips across remote regions of northern West Bengal) in the light of what forms a canon and how some objects are reserved from the process- bringing to light several traits of selective prioritisation in the art history of eastern India. Working further on the arts of the Pāla period for my doctoral thesis, my research interests broadly include- the transference of the arts and aesthetics of the Pāla period to the Himalayan and sub-Himalayan regions and South East Asia during the early medieval period mediated by objects like illustrated palm-leaf manuscripts, the popularity of the cult of the deity Prajñāpāramitā in eastern India in relation to the rest of South Asia, the appropriation of Vajrayanist cults within eastern Indian Bhramanism, notions of patronage, pilgrimage and art production (including large sculptures in stone, as well as wall murals and smaller objects in bronze/octalloy, terracotta, wood, ivory, palm-leaf manuscripts etc), and Madhyamaka philosophy.
I received an offer to do a PhD at the School of Oriental and African Studies last year but I could take it up due to lack of funding- as some major scholarships didn't award last year owing to the pandemic. This year too, I have been unable so far, to procure funds to support my four year research in London. I belong to a lower middle-class family from a regional geographical pocket in north-east India which is marked by deprivation. I have struggled against many odds to continue my higher education thus far; and to study at SOAS towards a doctoral degree is beyond my economic capacity.
My research is vital to the understanding of pre-modern Indian/ South Asian art history and the cross-Himalayan transference of Buddhist philosophy and ideas, and style and aesthetics in the arts.
My topic of research for the course MPhil/PhD in History of Art and Archaeology at SOAS is on illustrated Buddhist manuscripts of some Mahayanist Buddhist texts from the eastern Indian subcontinent, comprising of eastern India (Bihar, West Bengal) and Bangladesh, made between the tenth and the twelfth centuries, which is also known as the Pāla period. The dissertation is to be divided along the lines of its four main intentions: iconography, art historical positioning of the painting tradition of Pāla-period manuscripts, the developments in Madhyamaka philosophy and Mahayanist sacred geography. Problematising the overarching narratives of Indian art and alleged patronages by certain rulers, and taking into account the complex lived history of the masses (who were often illiterate) through quotidian and ritual objects such as these manuscripts will pave the way towards a broader scope of public appreciation for ancient South Asian arts within the domestic turf and all over the world. I also earnestly hope that through my work, I would be able to make substantial contributions to the study of Buddhist arts and philosophy.

I want to pursue a PhD in the UK, primarily because a vast majority of the illustrated manuscripts that I am working on, are held in the UK across different collections- the Boidleian Library at Oxford, the Chester Beatty Library in Dublin, the Cambridge University Library at Cambridge, the Victoria & Albert Museum, the British Library, the Royal Asiatic Society and the Wellcome Library in London. Physically being able to study these manuscripts housed all over the UK, is essential for my research work. Secondly, with its rich history of rigorous research on various aspects of South Asian arts, religions and culture, there is no better place than SOAS to undertake my doctoral training and research. I see my studying at SOAS as a doorway to experiencing the best of research standards, and being trained in one of the most world-renowned academic environment, to become a specialist in my field.
I have more than four years of research experience, including field works in India (regional and district museums) and in the UK (British Museum, Victoria & Albert Museum). I have received the UK Travel Award from the Nehru Trust for the Indian Collections at the Victoria & Albert Museum and the Study-cum-Travel grant from the Indian Council of Historical Research, and have presented several papers in national and international conferences over the years. My works have been published in national and international journals of art and its history. I have reviewed books on South Asian art history, across different journals on art and religious studies like The Burlington Magazine and Religions of South Asia- where I also remain a regular contributor of reviews since 2020.

Please reach to me at arc.sublime@gmail.com for more queries.