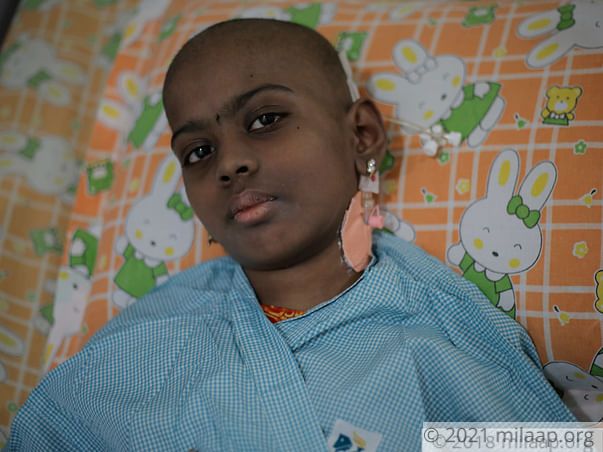 “It is amazing how Archana can smile through the pain of injections and nauseating medicines. Whenever I have broken down in front of her several times, she has consoled me saying she will be alright soon. She tells me to read stories of inspiration to her so that she does not lose her willpower to fight cancer. I don’t know how such a small child can exhibit so much maturity. But seeing her I cannot help think that we will lose her without help soon.”- Karthikraja.

Every day, 9-year-old Archana wakes up posing the same question to her parents: ‘Can we go home today?’ And every time, they would tell her that she can go home only when she gets better. Instead of crying and throwing a tantrum, this resilient little girl stays positive and talks fondly about her school memories. She is 100% sure that she will be well enough to go back to school one day, but her parents are not. Karthikraja, a driver and Sakthi, a housewife, live in constant fear of losing her to dreadful cancer as a result of their bad financial condition.

It was in late 2016 that Archana’s life changed for the worse. From a cheerful and bubbly little girl, she transformed into a sickly child whose high-grade fevers could not be controlled by medicines. Her parents took her to many clinics in their hometown of Aruppukkottai, 50 km away from Madurai, but she did not get better at all. She started becoming weak and fell unconscious on many occasions, pushing her parents into a never-ending cycle of worry and frustration.

“She had suffered from fevers before, but this was nothing like the usual. Her whole body would become so hot that she’d start shivering. Even after giving her medicines and covering her with blankets, she would still not be alright. The worst part is she would not be able to even sleep peacefully at night.”-Karthikraj.

It was after 7 months after she became down with regular fevers that Archana was diagnosed with acute myeloid leukemia, a type of cancer of the blood that causes production of excess immature white blood cells. This family’s whole world turned upside down and it took days for Karthikraj and Selvi to painfully come to terms with reality. Karthikraj had to take many leaves from work as Archana need to be started on chemo, which worsened their already-bad financial condition.

“I used to earn only 7,000 rupees a month as a driver and struggled to take care of my family consisting of my wife and two daughters - Nandini (16) and Archana (9) . Archana’s sickness added to my worries but I wanted nothing more than to save her at any cost. I had to take many leaves to get her admitted, which amounted to loss of pay, but there was no choice – my baby needed me and I had to be there for her.”-Karthikraja.

Despite undergoing two cycles of chemo, Archana’s cancer relapsed and she is more critical than ever

Karthikraj and Selvi had been praying for their child to get alright after she underwent two cycles of chemo, within a span of a year. After all, Archana had endured the horrors of cancer treatment – at one point her eyes and lips had become so swollen that doctors had to stop treatment for a while – but she had overcome it all bravely. Her parents were waiting to take her home to begin a new life together when they were told that her cancer had relapsed. All their hopes came crashing down and they couldn’t bring themselves to tell their child that she had to spend more difficult days in the hospital.

“We had packed our bags and were ready to finally leave the hospital. Archana had everything planned for her new academic year – she was excited to be going back to school after so long.  She had become more talkative than ever too; she shrieked ‘I am not sick anymore’ whenever the nurses gave her injections. But when the doctors said that she needed to be taken to Chennai for treatment as her cancer was back with more force, I broke down. She did not talk to us for a long time after we told her.”-Sakthi, mother.

After cancer came for Archana again, small boils have started appearing on her skin. Her blood count has drastically dipped to the extent that she needs a transfusion once in every few days. She cannot stop vomiting too – she has become very thin and lost all her hair that she’s almost unrecognizable. Sakthi had been staying strong for long, but now she is inconsolable. She does not eat or sleep well and thinks that her daughter may leave her soon.

“Archana doesn’t even frown, let alone cry despite her sufferings. I don’t know whether to be happy or sad about this – she has gotten used to her pathetic condition. .Her courage and optimism should be giving me strength, but instead it is making me feel guilty as me as I don’t have the resources to continue her treatment anymore. ”-Sakthi, with tears in her eyes.

9-year-old Archana has relapsed blood cancer for which she needs prolonged chemotherapy to survive. Her father, a poor driver, had to shift her to a private hospital in Chennai from a government hospital, for better treatment. Expenses are adding up every day, but he cannot keep up with them as he has been irregular to work since Archana’s diagnosis. Archana is determined to fight cancer boldly and you can help her do it.

Your kind contribution can save this 9-year-old’s life