GAURAV's online fundraiser for Medical | Milaap
Milaap will not charge any fee on your donation to this campaign.
Support ANSHUL MATHUR fight/recover from stage 4 non-Hodgkins lymphoma, a type of blood cancer 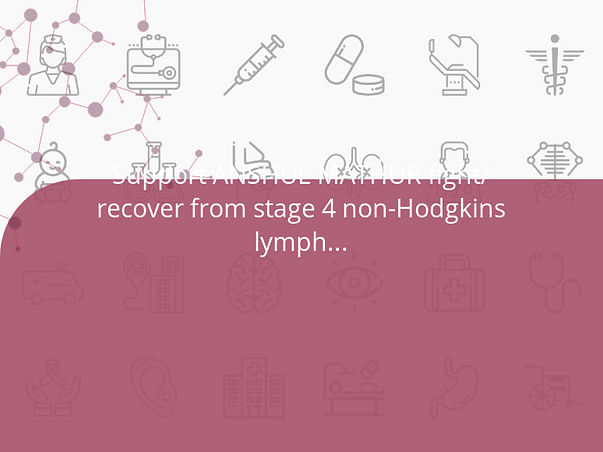 Meet my (college) friend Anshul, a high spirited guy who will be turning 42 this year in August. Like most Leos, he has shown resilience to overcome life’s challenges come what may. An electrical engineer turned fashion designer/entrepreneur, he has always been on the path to reinvent himself by learning new skills and making new connections.

A few days ago Anshul was diagnosed with stage 4 non-Hodgkins lymphoma, a type of blood cancer, and he is looking for financial support to start his treatment at the AIIMS medical facility in New Delhi, India. He has already undergone one round of a general purpose Chemotherapy until his team of doctors fully lay out a proper course of treatment over the next 2 weeks.

Some history:
Anshul is no stranger to life’s pain and adversities, but has always held a positive attitude. At age 7, he lost his dad and was mostly brought up by his mom in the company of his little sister and his maternal uncle.

In 2012, Anshul had his first experience with cancer, when he was diagnosed with stage 4 Hodgkins Lymphoma. He was treated with several forms of aggressive chemotherapy over a period of one year. However, in order to achieve a full remission, Anshul ultimately went through a stem cell transplant. If you know anything about a stem cell transplant, then you know it’s like pressing the reset button. After several weeks in hospital, countless needles and tests, medications and their side effects, Anshul still had to spend months living in a bubble before he could begin rehabilitation. But, it was all worth it in the end because my friend made a full recovery and lived in remission for nearly seven years - until now.

The expenses incurred during his first cancer treatment stripped Anshul of all his savings, and the time lost impacted his business operations as well. As Anshul was taking steps to get his business off the ground once more, the unthinkable happened. His mom, who lovingly supported him during his illness was herself diagnosed with cancer. Over the next two years of supporting his mom through her treatment, Anshul had to eventually shut down his business. His mom passed away in 2018.

The ask:
Anshul has been a great friend to me and many others through all these years, always willing to help with his time and presence. Now he is need of financial support to once again fight back against cancer.

Anything you can afford will be greatly appreciated. If it’s not within your ability to help at this time, I simply ask that you share Anshul’s story so that someone else out there may be willing to help us.

For now, I have set a goal of Rs 30,00,000 for this campaign but this is based on the cost of his treatment from the first time. I may have to increase the goal once I have further clarity on his treatment plan.


I will keep you posted on further updates on Anshul’s progress here.

Thanks in advance for your support!