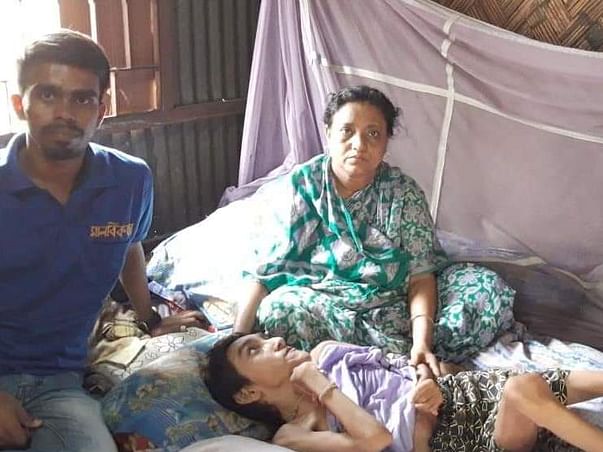 On 18th May, members of the humanitarian group went to the house of helpless mother Shikha Chowdhury of West Bhubanbhaban to pay tribute to "Mother's fight against the son of the elderly in an earning family" published in Perman Shakti Patrika on 18th May.  Shikha Devi said that her husband (house owner) Gauri Shankar Chowdhury lost a life to a tragic accident on September 19, 2017.  Then the mother and father are living in a very troubled situation with the boy, after the death of his father, his family came down to the dark darkness.  The son Jaydeep Chowdhury was born, he could not walk as he was 100 percent dabangan  The boy is alive with his help.  After the family's only earning officer died, the child's 600 rupees dearly donated their belongings.  Despite the widow of the widow, the widow is unable to pay her mother's son on the forehead, due to economic problems, she has to eat half a day.  At present, Shikha Devi's physical condition is affected by bad sugar, insulin is done, so she is forced to spend her medicines to cook cooking.  Despite all these problems, the woman has not been left behind even for her own responsibility.  Despite hundreds of problems, he is fighting against the boy.  Unfortunately no one has stood beside them yet.
If someone wants to help financially or in some other way, contact us with the number assigned to you.