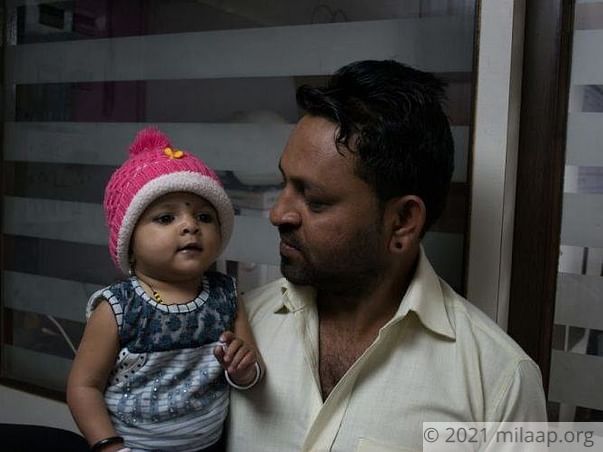 Share
“Whenever I look at my baby, my eyes fill up. I don’t know why this has happened to my baby. I just feel so helpless and hurt about the fact that I can’t do anything but be by her side “. – Manisha, Aditi’s mother
In addition to this, 9-month-old Aditi’s mother also fears losing her and has just about done anything and everything in the past 3 months to save her. Aditi has a severe congenital heart disease and a hole in her heart. She needs an immediate heart surgery but the only issue is that her parents have no means to save her.

Aditi is so cheerful

Playful and always smiling at anyone who holds her, Aditi is just so cheerful even though she is at a risk of heart failure. Her smile is radiant and the only thing her mother, Manisha can hold onto.

For the first 6 months, Aditi was totally fine. After a persistent cold and cough forced them to do a 2D Echo test on Aditi, Mukesh and Manisha’s happiness came crashing down after they learned that Aditi was born with severe heart defects. Aditi’s oxygen levels are low and she has a 7.5 mm hole in her heart. Her heart is at high risk of failure.

For 3 months, they went to several hospitals in Mumbai and Bangalore but all of them rejected to perform a surgery given the high risk of Aditi losing her life. They spent all they had on these trips but have finally found a hospital equipped to perform the surgery. The surgery should have been performed months ago. Her surgery is scheduled for 8th February 2018, and now Mukesh is running out of time to help his daughter.

Mukesh and Manisha received another blow when they found out that Aditi would need 3 surgeries in total. Her second surgery would be 2 years later and the third would be 4 years later.

All of this is possible only if her first surgery is successful. They are already racing against time to get her the life-saving cardiac surgery but now they don’t have anything resources left to save her.

Mukesh and Manisha are running out of time to save Aditi

With little time left, Mukesh and Manisha are in dire need of help to save their daughter. Mukesh is a tempo driver for a small retail store and is the sole earner of the house. He earns so little that it’s impossible to save anything. He has begged and borrowed from various people, including organizations and spent Rs. 80,000 on the treatments Aditi needed until now.

“The fact that I can’t help my baby hurts. If I don’t get the money, is she supposed to live like this and suffer? We’ve asked so many people and now, I have no idea what to do.” – Manisha

The total estimated cost of the cardiac surgery is approximately Rs. 2.85 lakhs. Mukesh and Manisha, simply, can’t afford such high costs in such short notice and have no other means except crowdfunding.

9-month-old Aditi’s only hope for survival is to get the heart surgery as soon as possible. She is already late and her parents are running out of time to arrange the funds.
Your support and contribution will save Aditi’s life.