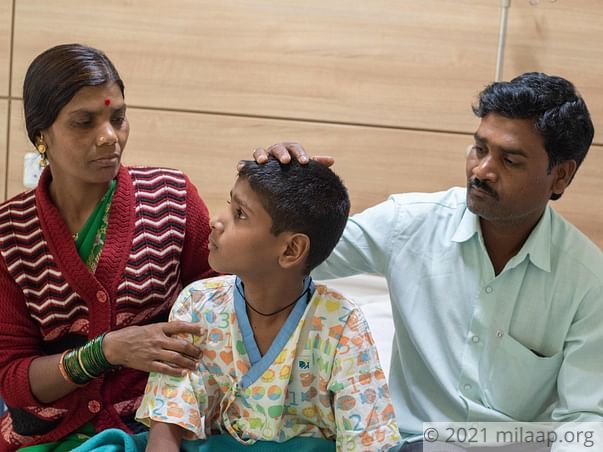 Abhijeet’s (12) exams ended five days ago. Despite his heart disease, he insisted on giving the exams and tried to do his best. While the parents of his classmates are eagerly waiting for the results, Abhijeet’s parents are worried about his life. Abhijeet has just 24 hours to get heart surgery.

“He wasn’t as active as other children and would tire easily. But we never knew that it was because he had a disease. It was only 6 months ago that we found out he has a large hole in his heart. We didn’t have the money to afford the surgery then, and we still don’t have it now. But he has no time left. He needs the surgery tomorrow.” – Janak, father

Growing up with an older brother and a younger sister who were both athletic and active, Abhijeet did his best to keep up with them. On most days he could, but on some days he would be so exhausted that he wouldn’t leave his room. His parents, Janak and Sushma, often worried about him. He got a cold and cough more frequently than his siblings, but every time they got him checked, the doctors near their home in Kolhapur said he would be fine. His life went on like this for 11 years.

“Until one day when he fell so sick that every time he coughed, he would be out of breath. We can’t believe that he had been living with heart disease for so many years. I feel guilty. Maybe if we were more educated he wouldn’t have suffered so much.” – Janak

Abhijeet has a large hole in the wall between the two upper chambers of the heart which causes oxygen-poor blood and oxygen-rich blood to mix. This leads to the heart working less efficiently. Without surgery tomorrow, Abhijeet's heart is only going to get weaker. Abhijeet is now running out of time to get a heart surgery.

They've already delayed the surgery once due to lack of funds, they need your help now

Janak is the sole breadwinner of the family. He’s a daily wager working in construction and earns anywhere between Rs. 250-300 per day. This in no way is enough to afford the 4.5 lakh surgery that Abhijeet needs. They have already delayed the surgery once due to lack of funds, now he can’t go on any longer without it. Janak doesn’t have the means or the time left to arrange for the money and desperately needs your help.