Mother Struggles To Save 4-Year-Old From Deadly Seizures | Milaap
This campaign has stopped and can no longer accept donations.

Mother Struggles To Save 4-Year-Old From Deadly Seizures 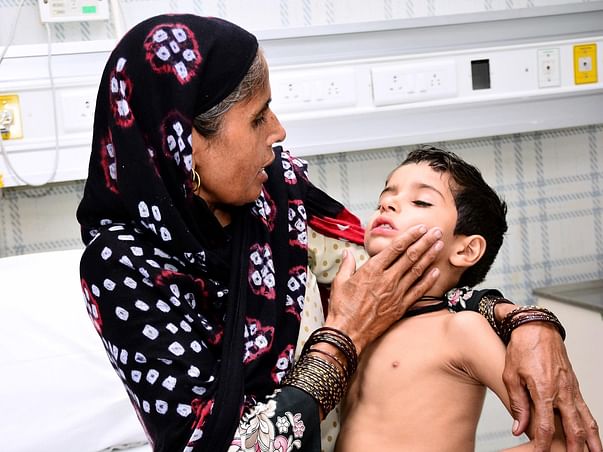 “I do not know which is worse, my son suffering nearly seven attacks of seizures a day or completely losing his memory. Because they equally hurt the heart of a mother. It is almost a year and there isn’t a day that went without seeing him fight for his life with this deadly disease. His body shakes rapidly and uncontrollably, the reverberating sound that is produced from his throat swells my heart and I pray to God to save my son. My heart shatters when my youngest child runs to me weeping after her failed attempts saying ‘ammi! when will he recognize me? when will my brother play with me?” - Jasmine, Aasif’s mother.

Despite many doctors asked to give up, this mother is determined to save her son

A year ago, Aakif suffered a high fever. His parents thought the medicines would cure him in a day. But the very night, he was attacked with seizures and vomited continuously. While his body was still shaking uncontrollably, he fell unconscious. They rushed him to the hospital where they were told that he urgently needs ICU admission. Jasmine and her husband put all their savings to save him.

"When he regained his conscious, the first thing he said was ‘who are you?’, I was shocked and he suddenly started talking to himself questioning who he was and where he was. I cried and begged the doctors to do something but they couldn’t help, he lost his memory completely.” - Jasmine.

After his first attack of seizures, little Aakif suffered many attacks and his health deteriorated drastically. The parents and his grandfather Babbudin made long runs around many hospitals. Despite various attempts of treatment by many doctors to stop seizures, they only became repetitive. In a year, he was nearly shifted to 10 hospitals. “Many have told me to give up on my son but how can I? I cannot live without my son. I’ll do anything to save him,” expressed Jasmine with teary eyes.

Surgery is the last resort for little Aakif’s survival

4-year-old Aakif is suffering from Febrile Infection-Related Epilepsy Syndrome (FIRES), a severe brain disorder with abnormal electrical activity in the brain. He urgently needs epilepsy surgery to permanently stop the seizures. The surgery stands as the only resort for Aakif’s survival.


“My son vomits the moment he eats anything. Since the day he fell sick, he hadn’t gulped any proper food. My Aakif survives only on a few selective fruits, he didn't have dal and roti for more than 11 months now. There is hardly any strength left in his body. He is so consumed by weakness that he cannot even sit properly. The disease has not only taken his memory but also his ability to speak. It’s been ages that he called me ‘ammi’. He forgot the words. My heart throbs to hear him speak and see him play again.” - Jasmine.

Father works all day to save his son, mother and grandfather look after Aakif

Matlub works as a helper in the railways and with his meager income, he struggles to feed his family. Even after using all his savings, he wasn’t able to afford frequent ICU admissions. He sold his house and Aakif’s grandfather Babbul sold his farming land to save Aakif from death. Now they have exhausted all their money and are left empty-handed. They cannot afford the surgery that costs 3.5 lakhs.

“We have done everything that we could to save our son. My husband and my father-in-law sold everything that we had. I sold my jewelry too. We borrowed a huge sum of money for his treatment. We have spent 20 lakhs till now. While my husband works hard every day to save our son, my father-in-law and I carry Aakif to the hospital. My child had gravely suffered and I cannot bear to see him struggle anymore, please help us,” - Jasmine.

4-year-old Aakif is fighting every second of his life. He is suffering from a severe brain disorder that causes deadly seizures. He even lost his memory and sense of understanding. He urgently needs epilepsy surgery, without which he may not survive. The poor family sold everything they had to save Aasif but now they are left with nothing to afford the surgery that can save him. 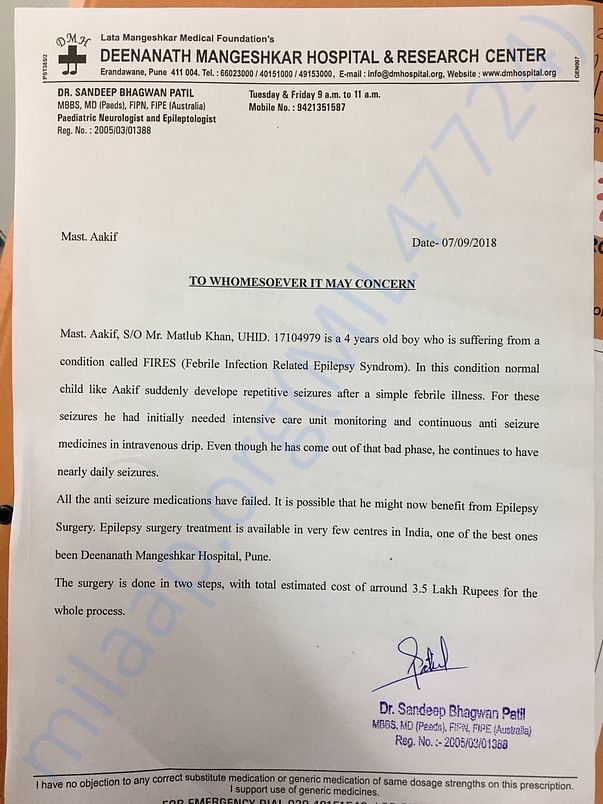 Aakif has undergone the surgery and is doing well now. He is back to his hometown and will go for routine check ups.

Thank you all for coming forward and supporting him.

Aakif underwent the surgery this month for seizures and is still in the hospital. He will be discharged this week. Even after the surgery his still has seizures, but they are milder than the previous ones. The doctors say that this will keep happening but the seizures will occur less frequently.

They have called him for a check up after two months, and then they will let us know what the future course of action will be.

Please keep Aakif in your prayers. Thank you all.

Thank you for the love and support you have shown towards Aakif.
He is still getting seizures and doctors have prescribed medicines to control the same.

The surgery is scheduled for next week in Pune. Please pray for his health and speedy recovery. Will keep you posted on further developments.

Scan & donate with any app
check_circle_outline Download payment receipt
Report fundraiser
Know someone in need of funds for a medical emergency? Refer to us
Rs.437,669 raised

311 Supporters expand_more
This campaign has stopped and can no longer accept donations.
$150 Million +
Raised on Milaap
Are you in need of financial support for medical or personal emergencies, or a social cause?
Start a fundraiser
Or
Know someone in need of funds for a medical emergency? Refer to us
Campaign organizer contact_mail

Have Faith.. God is always kind..

Have Faith.. God is always kind.. 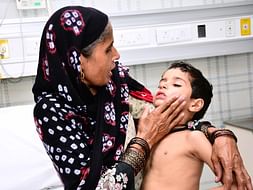 Mother Struggles To Save 4-Year-Old From Deadly Seizures