Zomato Delivery Executive Who Met With An Accident Needs Urgent Help | Milaap
This is a supporting campaign. Contributions made to this campaign will go towards the main campaign.
This campaign has stopped and can no longer accept donations.
Milaap will not charge any fee on your donation to this campaign. 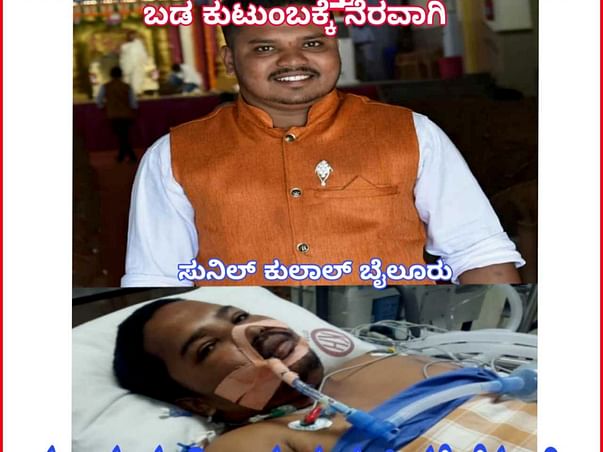 Sunil works for 16 hours a day to support his ailing parents. He’s a marketing executive by day and Zomato delivery boy by night. He never took a day off. It was during one of his food delivery runs in Udupi on February 6th that Sunil met with a tragic accident – a two-wheeler rammed into his bike from behind. Sunil’s left leg had to be amputated, and both his kidneys are now damaged. He’s been in the ICU for 20 days.

Sunil is hardworking and responsible. The helmet he wore saved him from a severe head injury, but his life is still in danger.

Even when Sunil (23) was studying in college, he worked part-time to support his education. He always dreamt big.  Nearly a month ago, Sunil started working as a marketing executive at BharatPe. He also took up the evening shift as a delivery executive at Zomato to be able to save more and support his parents. Collectively, he earned around Rs. 17,000-18,000 a month. It hasn’t been easy for Sunil – the sole breadwinner of the family.

“His father’s liver is damaged and his mother is mentally ill. His father hasn’t been able to work in nearly a year now. He’s been taking care of both of them single-handedly. He’s all they have. No matter how difficult it was, he always made sure to send money home to Bailur. He was even saving to build a house for them.” – Avinash, Sunil’s cousin who’s with him in the hospital

Sunil's cousin, Avinash, and friend, Tariq at the hospital

Sunil’s friends and relatives have come together to help him, but it's not enough

On February 6th, Sunil was rushed in an ambulance to a hospital in Manipal. The people in the house near which the accident happened saw Sunil and immediately called for help. Rama and Baby, Sunil’s parents, are in shock. Due to their illnesses, they can’t be with Sunil in the hospital. Sunil’s friend Tariq, cousin Avinash and uncle Sundar have been helping with the treatment so far. His other friends have also come forward to help. They’ve spent 4 lakhs on his treatment so far.


"Anyone who knows him, knows how kindhearted and helpful he is. Despite everything he's been through, he would be the first to lend a helping hand. So his friends didn't hesitate to come forward to help him. But everyone has already done everything they could."- Avinash

Sunil has had two surgeries and is currently under dialysis for his failing kidneys. He needs to stay in the ICU for longer to recover and needs your help now.


Sunil's uncle with him in the hospital

Sunil is still in shock, but he’s determined to make it

Sunil is now off ventilator support. He doesn’t talk much and is still in shock after his accident, especially on seeing that he lost his left leg. His poor, ailing parents have no one else to rely on. Sunil has his whole life ahead of him. He has always overcome obstacles with a positive attitude. But this time, he needs your help to recover from this tragic accident.

Your support will save Sunil's life. 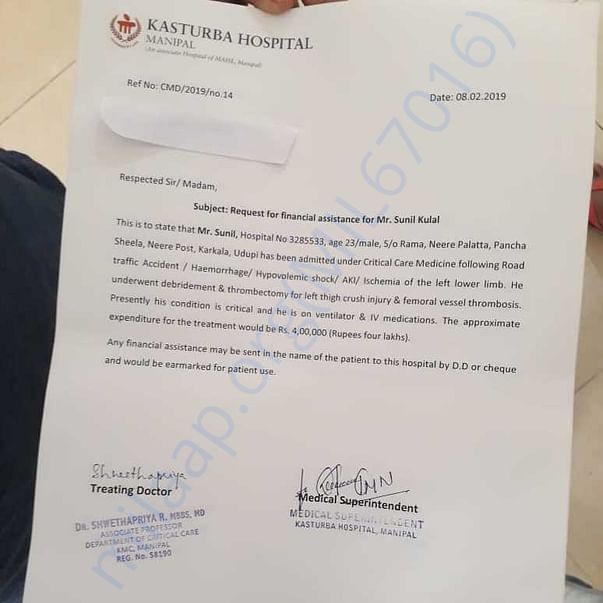 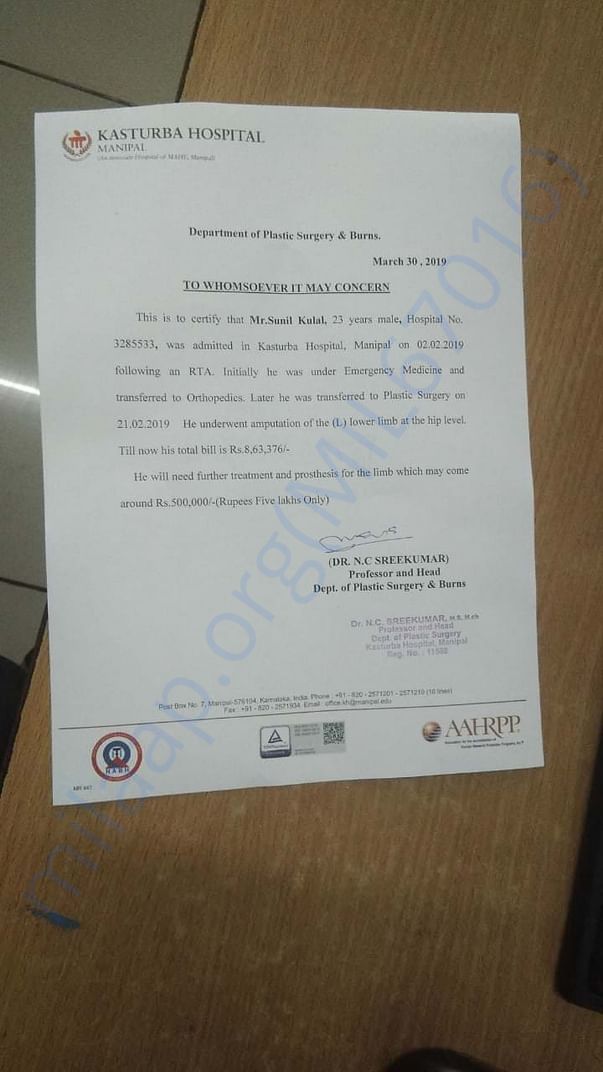 Thank You for all the support that you have showered toward Sunil. We are humbled.

As far as his health is concerned, Sunil is stable. After his discharge from the hospital, he has been staying at his uncle's house. He visits the hospital every 10 days for a checkup.

Thank You once again!

With the help of all your support through prayers and funds, Sunil has recovered. He is getting discharged from the hospital. We will never be able to thank you all enough for the kindness that you have showered toward us.

We are grateful. We will keep you posted.
Dear Supporters,

Sunil's next surgery is due on Tuesday. Please keep him in your prayers so he can recover from this unfortunate accident.

We will keep you posted on health updates.

Scan & donate with any app
check_circle_outline Download payment receipt
Report fundraiser
Know someone in need of funds for a medical emergency? Refer to us
Rs.1,480 raised

Baba's blessings are with you. You will get well soon

Baba's blessings are with you. You will get well soon 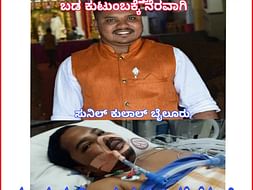