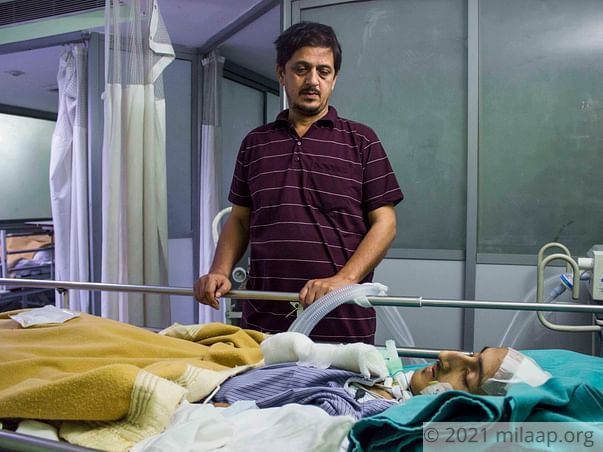 “Like every day, Suman had left home for his tuition on an evening of 2016 on his bicycle. He had bid goodbye to his mother promising her not to be home late. Little did we know, that he is never going to return the same way that he left. On his way, he fell from his bicycle and that left him in a condition beyond repair.”

They have lived in Nepal all their lives. The only time they had to move out was when they had to bring Suman to India for his treatment. Shankar worked as a mechanic in a city 200 km away from their village. Being the sole bread earner hasn’t been easy for Shankar. Sometimes he couldn't see his family for weeks.

“I used to go home once in 2 weeks. I had no idea that I would suddenly have to go home because of something so horrible. Suman fell from his cycle and had become unconscious. When Swara rushed to the spot, he was slowly gaining back consciousness. To our horror, when he tried to walk, he cried in pain. His legs were numb.”

Father took loans to ensure that his son could live

Suman’s MRI reports said that his spine was badly injured and he needed corrective treatments. For Shankar, who earned Rs 10,000 a month, spending 10 lakhs in one go was a big deal. In 2017, the operation was done and it was successful. Shankar didn’t even think twice before drowning in neck-deep debt.

“Swara and I couldn’t ask for anything else when after almost 7 months, he started going back to school. My son loved playing cricket. He wanted to go back to the grounds. We kept telling him, he could play after a few days. That never happened. Instead after a few months, Suman suddenly couldn’t walk anymore.”

Suman had to be rushed to the hospitals again. Doctors told them that the first surgery wasn’t a success and he needed yet another surgery for his spine to be straight. Shankar started borrowing again and brought his son to India in the hope that he would recover soon.

“In February, this year, my son underwent another surgery. After a few days, he caught an infection. It’s been 3 months and he is still in ICU on ventilator support. I am just waiting for the day when I can take him away from the hospital. But my son is struggling with his life now and I am scared that we might lose him forever.”

Without help, the battle for 2 years will go in vain

It’s been months that Swara and Shankar have been sleeping on the hospital floor. Shankar has already spent Rs 40 lakh and neck deep in debts. Being in India, he hasn’t been able to work for months now. He has no money left. He has borrowed from all the relatives. Suman’s fight so far will hold no meaning if Shankar can’t afford his treatment anymore. His parents might even lose him.

“My son was to appear for his 10th standard exams. He’s not able to do anything like he used to. Previously we were under the impression that he will be bed-ridden all his life. But now, if I can’t afford his treatments, he might not even live. After coming such a long way, I can’t afford to lose him.”

15-year-old Suman is battling for his life after 2 years of his accident. His parents have spent everything and are in terrible debt. They have no way left to save their son. The cost required for his treatment is over Rs 30 lakhs now. Without help, Suman will succumb to his infections.