There are around 1.5 million schools in India and it is estimated that 90% of children in the age group of 6-15 years are enrolled in either a government or a private school[1]. While these statistics are impressive, the quality of education in schools leaves a lot to be desired.
In the Annual Status of Education Report or ASER study[2] conducted across rural schools in India by NGO Pratham during 2014, it was found that about half of the children in Standard V cannot read Standard II text. Shockingly, almost 20% of the children in Standard V cannot read a word properly and about 30% of children in Standard II cannot even recognise letters.
The statistics are equally worrying when we look at students’ ability to deal with basic arithmetic. About 50% of the children in Standard V cannot do basic subtraction and 20% of children in Standard II cannot even recognise numbers from 1 to 9.
What is even more disturbing is that there seems to be no improvement in learning outcomes over the years. In fact, the numbers point to a declining or stagnant trend, as seen from the graphs below.
Clearly, school education alone is not enough. With recent changes in law doing away with the requirement of retaining students if they do not clear final examination in a particular standard, the risk is that in the future, India will have a significant youth population that cannot pursue college education and would not be job-ready.
How Can the Problem be Solved?
Most middle- and upper-income bracket families supplement school education for their children with home tuitions, to help them overcome subjects in which they are weak. But, low-income families cannot afford additional tuitions. Children from low-income families are further disadvantaged as even their parents cannot support them, because in most cases, they have not completed school education or may even be illiterate, as illiteracy rate among adults is as high as 30% in India. Therefore, for children in most low-income families, learning is largely limited to school hours only.
Further, a large group of migrant labourers in India move from one place to another and take up temporary work at different cities in India. It is estimated that about 120 million people in India migrate from rural areas to cities looking for work[3]. A majority of them (around 40 million) who work in the construction sector, move with their children and work on a project site for 3-6 months and then move to another project site. This results in frequent interruptions in schooling of their children, making it difficult for them to catch up with other regular children.
These issues can be addressed by improving the quality of teaching in schools as well as looking at how children can continue learning after school hours. While initiatives such as those of Educomp, Hippocampus, Akshara Foundation and Karadi Tales look at improving the quality of teaching in schools, there are only a few initiatives that target off-school learning.

Any initiative that aims at promoting off-school learning must be designed such that children can learn without the help of trained teachers. Secondly, such an initiative should also incorporate fun in learning, as otherwise, children may not be motivated to go back to school lessons after school. Thirdly, in the absence of teachers or educated parents, the off-school learning initiative should enable children to learn from their peers and older friends. Fourthly, the initiative must also be cost-effective and should not be too dependent on digital, internet and mobile-based technology that children in rural areas may not have access to.
Even with these challenges, the importance of off-school education cannot be ignored, given that there are major lacunae in the inputs and quality of education that underprivileged children receive in school.

What are We Trying to Do?
The #StoryCards project is an attempt to take a common household game – the playing cards or taash as it commonly known in India – to the next level and make it an educational toy for children. Playing cards have been used in India for many centuries and India is even known to have its own form of playing cards called the Ganjifa, which consisted of 96, 120 or 144 cards[4].
With the inherent use of numbers, colours and suites, playing cards are an excellent tool to teach basic arithmetic and number recognition. Through the #StoryCards project, we also plan to make use of the back side of the cards to teach children basic character recognition and reading skills with the help of illustrated stories. Apart from standard card games, we will design a game where the objective is to maximise a player’s score while also constructing a meaningful story.
Similar initiatives have been made by EduStack[5] (one set of cards explaining mathematical constants and another showing drawings of constellations) and by Chitrashala Press[6] in the 1940s (cards with Hindi alphabets, now out of production).
The first pilot set of #StoryCards will have four simple standard stories, but with playing cards, the possibilities are simply endless. Based on feedback from the pilot project, we are planning to design many sets of playing cards with different stories in the future, including stories with social messages.

The advantage of using playing cards with illustrated stories as a teaching tool is that playing cards allow group play and children of all ages can play together, which will help the weaker children pick up numbers and words easily, while having fun playing.
How Will your Contribution be Used?
For the initial pilot, we plan to print 100 decks of cards, which will be distributed free of cost among construction labourer kids and underprivileged school children in urban and semi-urban locations. We have chosen Bangalore for the initial pilot.
Each deck will consist of the standard 52 cards, and there will be four different standard stories for the children to learn from. For the pilot, we plan to have stories only in English. The stories will be illustrated and simple to understand, based on the everyday lives of children from low-income families.
Since the cards will have different images on the back side, we estimate that the cost of printing the cards will be higher than that of normal cards. All cards will be printed on plastic, so that they are durable and can be easily used by children. Printing costs are, therefore, likely to be the biggest cost item for the project. The other significant cost areas are expected to be storyboard visualisation, story illustration and distribution costs. 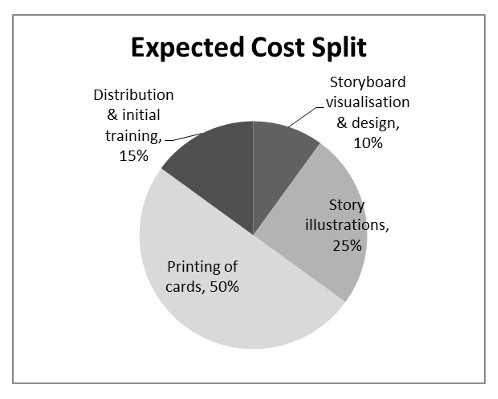