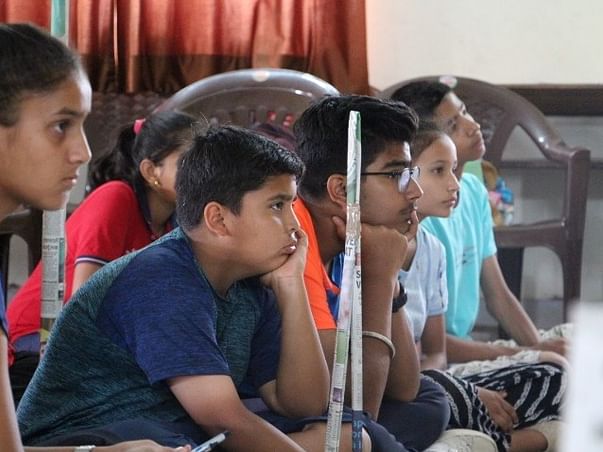 How would you imagine….

Our future:
All cool high techs, automated-levitating cars, scientists finding cures to all diseases, humanity moving to Mars, feasible sustainable energy to all, the list goes on and on.
Our society:
A just and equitable society, which is liberal, meritocratic, open-minded and inclusive. A society that is able to identify and solve the collective and the individual problems together. And grow together to new pinnacles of humanity.

But what does our reality look like...
Global warming, climate change, poverty, pollution, the refugee crisis, terrorism, discrimination, inequality, nations getting more and more hostile and closed. A pandemic completely destabilising the entire global ecosystem.
The list is endless, there too.

Zooming into our country...
India is one of the fastest-growing world economies, even in the new normal. We have the largest number of young people and children.
But, we still have our pronounced share of poverty, unemployment, overpopulation, insufficient healthcare facilities, and educational inequality in our society.

Zooming into Uttarakhand...
The hilly state is a natural marvel of picturesque mountains and very hard working people where tourism and agriculture are the baselines of life. The community faces many challenges common to 21st century India: unemployment, unskilled youth, lack of exposure to technology, etc. It has a staggering unemployment rate of 11% in the rural areas, which is the 3rd highest in the country and Dehradun district has the highest number of unemployed youths in the state.

According to the 2011 census, 734 villages in Uttarakhand have become totally depopulated, out of which 50% of them left in search of livelihood and the other 50% due to poor education and health facilities. Unfortunately, hilly areas remained almost untouched in industrial development despite the pro-industrial policies of the government, due to lack of proper infrastructure, lack of skilled manpower, power, and recurring natural disasters. According to Government reports, there is a great demand for the promotion of technical education, skill training, career counselling, and industrial knowledge, etc.

Before going further, we would want to give a brief idea of who we are...
MAMS is a non-profit institution based at Raiwala, Rishikesh (District Dehradun), Uttarakhand. MAMS was established in 1985 to address the educational aspirations of the rural communities of the Tehri (Garhwal) region after the construction of the Tehri Dam, in the upper regions of Shivalik Himalayas, displaced the entire community from that hill town.

MAMS has relentlessly been providing affordable contemporary education for over 3 decades now. The pedagogy at MAMS has been evolving according to the needs of the changing times as required for our students. More recently, the school has begun experimenting with a futuristic education model by way of facilitating STEAM (Science, Technology, Engineering, Arts, and Math) education in rural Uttarakhand. The aim is to disrupt the ‘exposure inequity’ in the region and create a culture of innovation and tinkering among students. We believe that the state-of-the-art STEAM innovation space will be a catalyst for a revolutionary change in the way we impart education and promote inclusion in inclusive education.

Now, how do we solve the problems, which seem like a vicious cycle, you start solving one thing you will end up crushed by the other !!?
We at MAMS Raiwala are inspired to find solutions through STEAM-based education. We believe that providing technology-rich holistic education to the next generation is the key to solving most issues. We endeavour to disrupt mainstream rote learning by focusing on a  broader 4E paradigm that inculcates a vision to Educate, Enlighten, Enrich, and Empower (the fraternity).

On 27 August 2019, MAMS established the Shri Ram Panjwani Innovation Centre. The Innovation Centre houses an Atal Tinkering Lab which has been established by Atal Innovation Mission, NITI Aayog, Government of India in collaboration with the school Management.
At MAMS we have been relentlessly pursuing to establish a culture of innovation among our students and students across the state and the country.
In November 2019, we conducted, Fast and Frenzied, a first time ever all Girls Robotics Event. From March 2020 - June 2021, we have been selected among the top 5 functioning ATLs in Uttarakhand,14 times. In August 2020, we conducted an Online International Interschool App Development Hackathon with a focus on UN SDGs. On November 14 2020, we conducted the first TEDxYouth@MAMSRaiwala event. We have also been organising an inter-school innovation festival named " Atal Tinkering Festival" on a monthly basis in collaboration with two other Atal Tinkering Labs.

As with most organisations and establishments, the pandemic had a very drastic effect on our functioning. We as an educational institution were completely pushed to go Online. We had to revamp our structure to cater to the new normal. But as mentioned earlier, we are relentless in our pursuit to skill build young people with 21st-century skills and mindsets. And for this endeavour require your support.

Projects in which we seek your collaboration and support :

1.Donate to Educate: A Donation Drive of Digital Devices to equip 30 young people to effectively pursue education in these trying times.
Budget: Rs. 20,000/-

3. Facilitating High-Speed Internet Connectivity in the Ram Panjwani Innovation Centre to ensure access to the Internet for young people to facilitate innovation.
Budget: Rs. 30,000 ( For 1 year)

5. Creating a state of the art interactive STEAM park on MAMS Campus which will be based on the concepts of BALA ( Building as a Learning Aid).
Budget : Rs. 1,50,000

6. Community Library at MAMS: Open to all young people in Raiwala, the objective of the Community Centre is to build 21st-century skills among the youth to equip them for skill development.  We seek your support for the running cost of the same.
Budget: Rs. 50,000/- (per year)

7. Innovation Projects: This is the most disruptive project. We want to incentivise innovation by providing funds to the innovations by young innovators from a school level. We have come up with a system to incubate such ideas but somewhere down the line, the financials become the roadblock.
Budget : Rs.1,00,000 /- (per year)