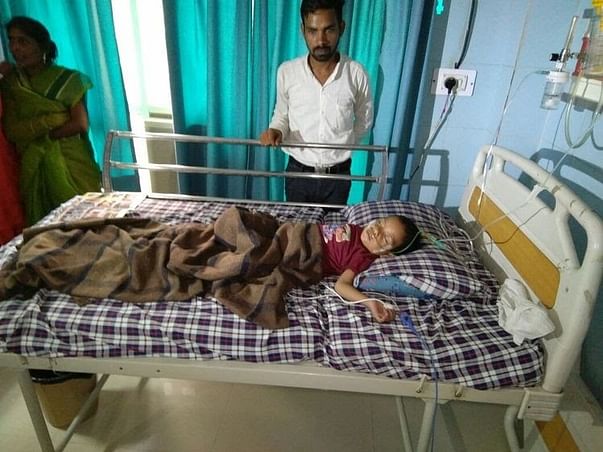 Sagar Meshram 5 years son Priyanshu has complex Congenital Heart Defect (CHD) which is complex being more of a Ventricular Septal Defect (VSD) and Double Outlet Right Ventricle (DORV) - where his impure and pure blood are getting mixed thereby seriously damaging his lungs.
Sagar Meshram is a poor painter who works on daily wages in Bhopal. On 22nd August 2014 his Son Priyansu Meshram was born and after 4 months he was diagnosed with severe pneumonia. He was then admitted to Miracle Hospital in Bhopal where later we was referred to AIIMS New Delhi as Doctors there were unable to diagnosed further.

Priyanshu is having a big hole in this heart which is why it was difficult for all the doctors.
Doctor at AIIMS had refused to do the treatment by saying that they are too late for his treatment but the doctors at Fortis Hospital New Delhi told Sagar that his Son’s ailment cannot be cured but they can add span of few years by doing three operations. With Govt support he managed to get the surgery done.
Later he went to Narayan Hrdyalaya and several other hospitals also who had refused clearly to do the treatment. Now when Sagar contacted Fortis Hospital for second surgery then they told him that it cannot be done because the pressure at heart was very high and blood is going to lungs very fast which they can’t control.
Sagar is an uneducated labor but because of his son’s health he became internet savvy and started exploring all the option to save his son. One day he found the video of Boston Hospital where he saw the ray of hope. He then contacted them through mails. After several mails he was able to coordinate to them and they asked all his medical reports.
Boston Hospital got agreed that surgery is possible and this ailment can be cured too. They gave cardiovascular global discount estimate of USD 1,00,557/- which is equivalent to around Rs. 66 Lakhs in India currency.