My Son Is Fighting A Fatal Disease That We Cannot Afford To Treat | Milaap
This is a supporting campaign. Contributions made to this campaign will go towards the main campaign.
This campaign has stopped and can no longer accept donations.
Milaap will not charge any fee on your donation to this campaign. 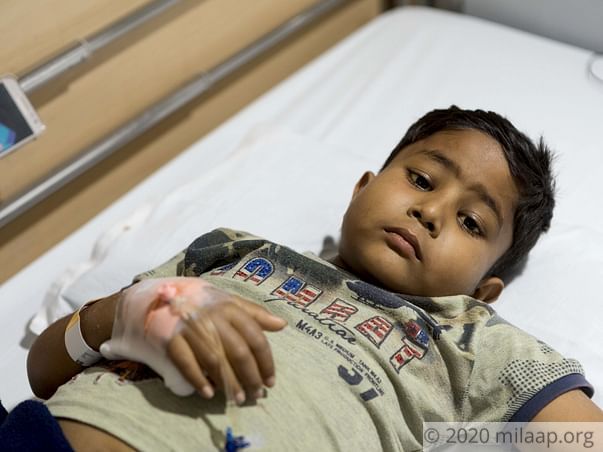 I was under the notion that there’s nothing more I could have asked for. I had a joyful family. Only in early March, my notion was completely crushed when we got to know that my 8-year-old son, Souvik is severely ill and may die if not treated urgently.

With my wife, Pinku, Souvik and 3-year-old daughter, Shreya, I was living a happy life. I work in a jewelry store in Siliguri and I earn as per the amount of work that I can deliver. I don’t have a fixed income. But unlike other children of their generation, my children are content with whatever they have. They neither complain nor demand.

It was a usual day when Souvik returned from school. Pinku observed that his body had swelled up and he was turning yellow. The next day doctors carried out tests on him and confirmed his jaundice. The medicines weren’t working on him and his jaundice was becoming worse. We immediately brought him to Hyderabad.

To our horror, what we thought to be jaundice turned out to be decompensated liver disease. It is a liver condition where the body swells up due to the accumulated water and the patient suffers from jaundice. I couldn’t believe this is happening to my own child. I don’t know what went wrong. However poor we might be, I have never left any stone unturned to give my children everything they need.

Souvik studies in the 2nd standard and he is a very bright student. His teachers have been calling us regularly to know his condition. My son loves to go to school. On the day of his 1st exam, we had to hospitalize him. He keeps on crying because he doesn’t want to fail due to not appearing in the exams. We have no clue how we can possibly address his concerns.

We already lost one young member to the same disease

I have started believing that our family is cursed. It's not even a year that my brother lost his elder daughter to the same disease. Just like me, he had no money to save his daughter. He has ended up neck-deep in debt and still couldn't save her. We are poor. I cannot even think about how we can get such huge amounts of money. I can't believe that we are losing our children because we can't afford such expensive treatments.

Doctors are saying that my son has a very good chance of recovering. But this is only possible if I am able to gather the required amount of funds. Otherwise, just like my brother, I will end up losing my child too. I don't want to feel cursed all my life. We don't have much hope in life, it is only our children's faces that we live for.

We barely have any relatives who would come to help us. Shreya is so small that we couldn’t leave her behind at home. Pinku and I have to stay at the hospital almost all the time. Hence, we had to bring someone to take care of Shreya too. All of this has only increased our expenses.

We don’t know anything in Hyderabad. I feel lost in a new city. We are staying in a shady hotel near the hospital. We cook our food here in the hotel because that lessens the cost to some extent. I wonder if all of these efforts would be useful in escaping this terrible fate.

Souvik is in too much in pain and I am not being able to rescue him from this. I feel miserable. I feel I have failed as a father. I never thought I would need to borrow money from anyone. I neither thought we would be put in a condition which we don’t even have a way to fight. Until now, I never realized that our poverty will be such a curse for us. A disease so terrible and I can't even help my family sail through this.

Everybody wants answers and I don't have any

Pinku sleeptalks sometimes where she begs to save our son. Shreya keeps on asking us about her brother and I don’t even know what to tell her. She is a baby. Souvik doesn’t understand what is wrong with him and why is taking so many medicines. We don’t have the courage to tell him that his liver is critical and we might not be able to save him. But I don't want to sit and cry over my fate. I have to save my child at any cost.

It’s not even a month and we have already spent a little over Rs 1 lakh. I didn’t have any money to bring my son to Hyderabad. My son's treatment begun in debt. As I am not in Siliguri, I can’t even work and earn any more. I don’t know how we will survive.

My son has just begun exploring the world. He deserves a chance to live. Liver transplant is the only which can save him. But the cost of saving him is Rs 18 lakhs which is something I cannot arrange anyway. I don’t want my son to die at the age of playing around. I badly need your support to give him a life.

Disclaimer: This fundraiser campaign is supported by The Pravin Agarwal Fund.
Supporting document 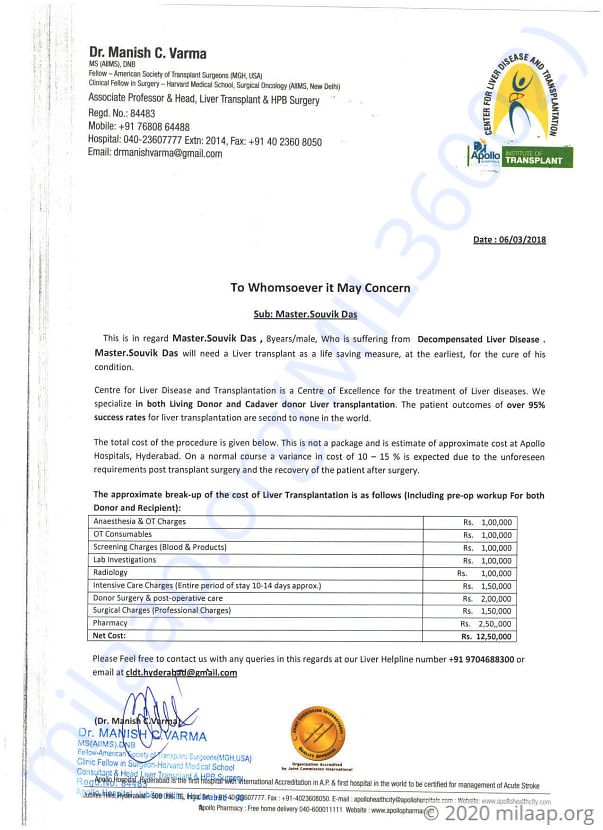 Here is a quick update: Souvik is doing fine now, and he is at home. His health is good now.

Thanks you all for your love and support.

Souvik is doing fine now, and he is at home. He is receiving medication as prescribed by the doctor. After a month we will be taking him for a check up and the doctors will conduct a blood test. Based on the result of the blood test, they will take a call on how his medication can be changed.

Here is an update on Souvik's health.

He is on the road to recovery now, there is improvement in his health. He is on medication for now, but the dosage has reduced.

Would like to thank all of you for the love and support.

SD
You are sending a message to
Sudhan Das
Go back 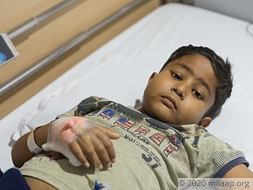