Contract Laborer Cannot Save 10-Year-Old Who Cries And Begs God | Milaap
This is a supporting campaign. Contributions made to this campaign will go towards the main campaign. 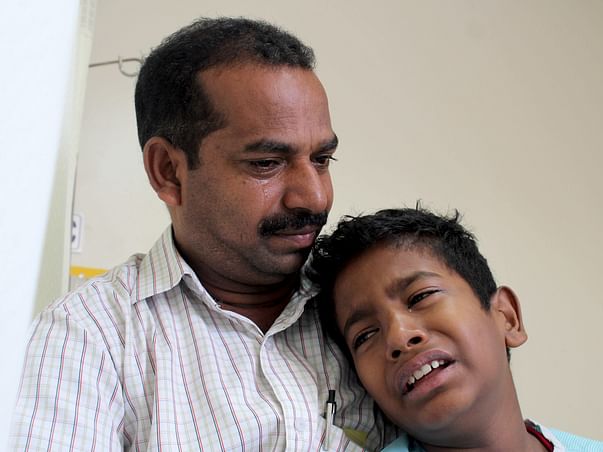 “Sam knows that he has a dangerous disease and understands why we stop him from doing things he likes. He does not want anybody to feel bad for him. But sometimes, when he cannot bear his sadness, he cries in front of a picture of Jesus Christ and begs to rid him of his suffering. I just hope we can save him before it is too late.”-Suresh.

A blood disease has changed Little Sam’s life for the worse. He cannot run behind his younger brother Selvin (7) and play with him anymore because even a small fall can cause bruising. His parents, Suresh and Jancy, are careful not to let him near sharp objects as small cuts can lead to prolonged bleeding. All Sam can do now is draw and read – but sometimes exhaustion does not let him do either. Suresh, a poor contract laborer, has been struggling to keep him alive for three months now – but if Sam does not get a bone marrow transplant soon, he can even die.

One day in June this year, Sam’s parents noticed that his gums had become white in colour. They didn’t pay much attention to it until his skin started acquiring a pale tone as well. They took him to many doctors thinking it was a nutrition problem, but none of the health supplements they prescribed seem to work. When he started fainting regularly and looking weaker with every passing day, his parents became more worried.

“Normally, after coming back from school, Sam would change his clothes and run to play with the neighbourhood kids. But all that had changed – he would go straight to bed now and sleep now. He had also started eating less, which was so unlike him as he would always be hungry. Sometimes he would ask me, ‘Amma, why don’t I have any energy now?’ and I’d tell him everything will be fine and ask him to pray.”-Jancy.

When Sam’s weakness did not improve at all, his parents used up all their savings to take him to a good hospital to undergo comprehensive tests. The blood test results revealed a shocking truth – Sam had aplastic anemia, a serious condition where the body stops producing enough new blood cells. Suresh and Jancy were heartbroken when they were told that Sam would require regular blood transfusions to survive, and a complete cure can only be achieved with a bone marrow transplant.

“We are not very educated, but when the doctor explained to us in simple terms that Sam’s body was not producing enough blood, we understood the severity of the situation. He had always been a healthy child so it was difficult for us to understand how he got this disease all of a sudden. He always hated injections and never liked coming to hospitals, so we had to lie to him about his disease for a long time before he found out on his own.”-Suresh, with tears in his eyes.

Sam has uncontrolled bleeding in his nose and gums, does not leave his mother’s side even for a while

Ever since his diagnosis, life has become very difficult for Sam. He regularly bleeds from his gums and nose now. He gets regular fevers, which take days to subside. Additionally, he also has severe knee pain and a burning sensation in his chest at all times. The only thing that comforts him through this difficulty is his mother’s embrace.

“My child used to be so brave, but now I can see fear in his eyes. But he hides it from his father and me – he tells us that he will be alright as he is praying regularly. He always wants me by his side – I feel that he is trying to spend as much time with me as he possibly can because tomorrow is so uncertain in his case. I just hope he gets the transplant on time.”-Jancy.

Suresh is a poor contract laborer who earns a meagre amount. He never could save any money as his salary was just enough to feed and clothe his family of four. Ever since Sam fell sick, he has been running short of funds – his weekly transfusions itself cost Rs 7,000 that he struggles to pay for, and a transplant is much beyond his reach.


Sam with his little brother

“I am able to pay for Sam’s transfusions only by begging near and dear ones. I have already incurred a huge debt like that. I had to pull my younger child, Selvin, out of school because I do not have money to pay his fees. Our lives have come to a standstill – but all we want is Sam to be alright. Please help me save him.”-Sam.

10-year-old Sam has aplastic anemia, a dangerous disease where his body does not produce enough blood. His life is temporarily being sustained by blood transfusions, but only a bone marrow transplant can completely cure him. His father is a contract laborer who has been struggling to keep up with medical expenses since his diagnosis and cannot afford his transplant. Sam prays to be alright and be free of this disease – he wants to go back to school and be happy again. You can make sure that this happens.

UPI: rzpy.givetomlpsams0000003@hdfcbank (Copy to clipboard)
Or
Click here to read the instructions before you make a bank transfer. 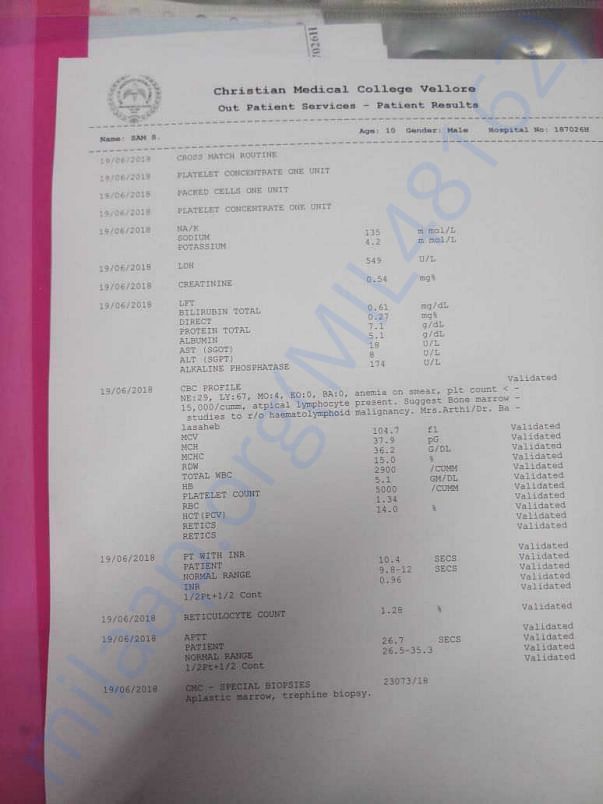 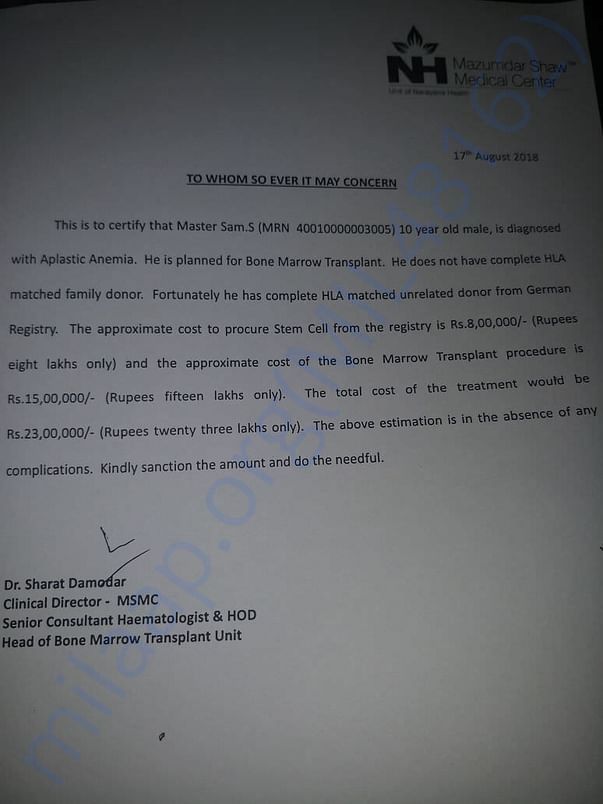 UPI: rzpy.givetomlpsams0000003@hdfcbank (Copy to clipboard)
Or
Click here to read the instructions before you make a bank transfer.

Sam underwent the bone marrow transplant and is in the hospital right now. He has been under observation for a week now. The donor was from Germany.

Post the bone marrow transplant, he has some side effects such as vomiting and high blood pressure. He is receiving treatment for the same and is doing much better now. He will have to stay in the hospital for a month. After 90 days the doctors will conduct check ups and observe how he is progressing.

Thank you all for your love and wishes.

Regards,
Paulraj
Donate
Report fundraiser
See how thousands are crowdfunding for their causes on Milaap
Content Disclaimer: The information and opinions, expressed in this fundraiser page are those of the campaign organiser or users, and not Milaap.
If such claims are found to be not true, Milaap, in its sole discretion, has the right to stop the fundraiser, and refund donations to respective donors.

You are sending a message to
Sophia Sampath
Go back 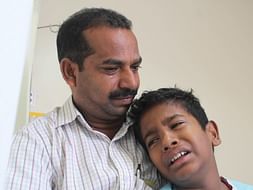