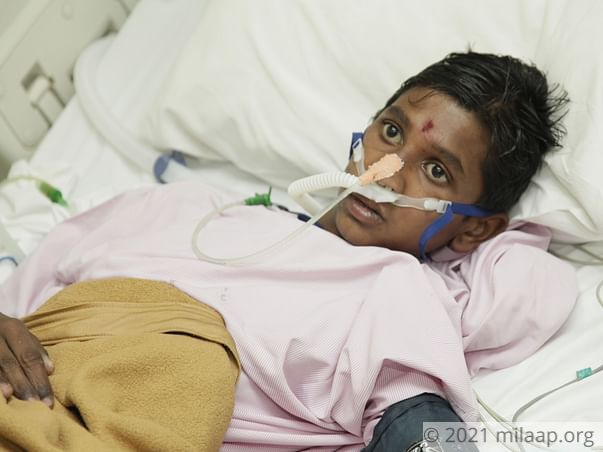 Share
On 7th March, 12-year-old Sonith’s life unturned upside down. He was rushed to the ICU as he struggled to take even a single breath. Manjula and Narayana remember the horrified look on his face on the way to the hospital. Sonith didn’t know what was happening to him. He still doesn’t know that his condition is extremely critical because of severe pneumonia. He thinks it’s a small infection that will go away soon, but the reality of Sonith’s condition is far more serious. Sonith needs to stay in the ICU for at least 10 more days to recover from pneumonia.

In one day, his condition deteriorated drastically

Sonith had a mild fever on few days before he was admitted to the ICU. However, after taking him to the doctor, he felt better. Manjula wasn’t too worried since Sonith soon went back to playing with his siblings. When his fever returned a few days later, Manjula never imagined that it would be the beginning of a battle between life and death for her young son. An X-ray later, they found out that what they thought was a common cold was actually severe pneumonia.


“The next few hours were the toughest for us. His condition suddenly became worse. He was slightly sick in the morning, but by evening, he was struggling to breathe and before we knew it, he was being rushed to the ICU. In just one day, his condition deteriorated. The infection had spread completely to his lungs, which was making it difficult for him breathe. I could see the fear on his face, I can’t imagine what was going through his mind at that moment.”

Sonith has been in the ICU since March 7. He was taken off ventilator support a few days ago, but he’s still not completely out of danger. It’s crucial for Sonith to stay in the ICU longer to have a chance to make it.

Sonith is terrified of staying in the ICU alone

Sonith now lays on the hospital bed, staring vacantly ahead. He doesn’t talk much, but he’s terrified of being in the hospital. Manjula stays with him as long as she can to make him feel better.

“He’s still very young, so they let me be with him. He’s really scared. He doesn’t understand what’s happening and why he has so many tubes and needles attached to him. He doesn’t say much, but he asked me when he can go home, I told him that its only an infection and he’ll be fine in no time. But I know that’s not true. If we can’t keep him in the ICU till he can fully recover, the chances of the infection coming back are very high. His life will be at risk again, and I will never forgive myself. I can’t put my son through this. He should be spending his time with his friends and siblings like he was before this disease took over his life.”

Sonith’s condition is improving, but without continued treatment, he won't make it


“Without treatment, we will lose him forever. He has improved in the past few days and has a good chance of getting better. His daily medical expenses are far more than what we earn in a month. If we can’t afford it, we will be taking away the one chance that he has. I don’t know what to do or whom to go to for help anymore.”

Sonith has pneumonia and suffered severe respiratory problems and infection because of it. His only chance to survive is to stay in the ICU for at least 10 more days. Manjula and Narayana have exhausted all their savings and are desperately looking for help.

Your support will save Sonith’s life.

Donate
0%
Be the first one to donate
Need Rs.950,000
Card, Netbanking, Cheque pickups
Or Donate using