Help Harsh fight APLASTIC ANEMIA | Milaap
This is a supporting campaign. Contributions made to this campaign will go towards the main campaign.
This campaign has stopped and can no longer accept donations.
Milaap will not charge any fee on your donation to this campaign. 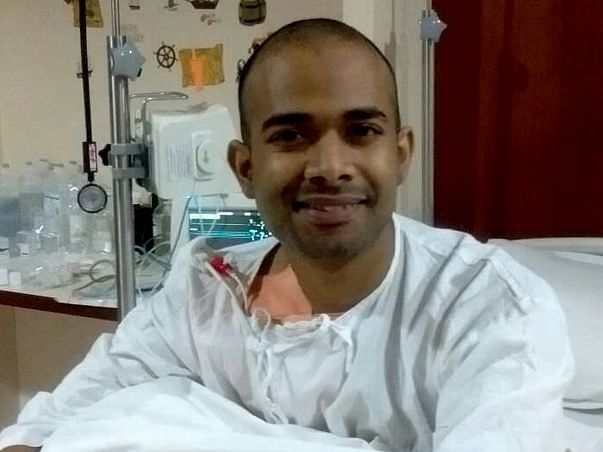 Harsh is suffering from Aplastic Anaemia. It is a rare disease in which the bone marrow and the hematopoietic stem cells, the cells that generates blood cells, are damaged. As a result, Harsh’s body is unable to produce mature blood cells and he is in a life-threatening condition. The only solution, according to the team of doctors in Dharamshila Narayana Superspeciality Hospital in New Delhi, India is that he is treated with doses of Eculizumab. It will treat Harsh and help him live a normal and happy life with his beloved family. But unfortunately, Eculizumab is one of the most expensive drug in the world (Forbes 2010; The Balance 2017).
It started in the year 2009 when Harsh was detected with dengue and was treated under the supervision of Dr. Shailendra Dubey in Bhopal. Despite full treatment and accurate care, his blood counts and especially platelets and haemoglobin were not normal. Although the body was not transfusion-dependent, the counts were also not normal. The doctor advised his family to wait for his body to completely recover.
Because of the running time Harsh and his family started consulted other big hospitals in the nation, such as Bombay Cancer Hospital and CMC Hospital, Vellore. Nobody could decipher his complications until in 2011 Dr. Sunil Dhabargoan in Sahara Hospital in Lucknow detected that he was suffering from aplastic anaemia. Given the gravity of this rare disease, Dr Dhabargoan referred him to Dr. Shashikant Apte in Sahyadri Hospital in Pune. In Pune, Harsh was given ATG treatment, which is an infusion of horse or rabbit-derived antibodies used to treat aplastic anaemia. Despite the difficult decision to undergo this treatment alongside a heavy cost of about Rs. 25 Lakhs, the treatment was considered a failure in 2015 because the body unfortunately became transfusion-dependent.
Meanwhile, Harsh didn’t lose hope from his life. His fighting attitude, hardwork, intelligence and denial to accept that he was “unhealthy” rewarded him a seat into the respected National Institute of Technology (NIT) in Bhopal in 2012 through AIEEE examination. In college, Harsh was the heart of his class and batch. He took part in every activity with full enthusiasm and life. He also worked in a health NGO named Narmada Jewandayini in his college days where he used to visit tribal villages of Hoshangabad in extreme weathers to do good for the needy people who lacked medical support. Little did anyone in his college know the courage Harsh took every single day to fight his rare disease to come with an ever-smiling face in class to learn and contribute.
Unfortunately, things turned bad in 2015 and in March Harsh was moved under the care of Dr. Dharma Chaudhary in B.L. Kapoor Super Specialty Hospital, Delhi. In May 2016 after finishing his course in NIT, Harsh underwent Haplo Bone Marrow Transplant in May 2016, which was donated by his sister. The treatment costed around Rs. 35 lakhs, but it again proved to be a failure in May 2017, as Harsh’ body was found to be severely transfusion-dependent.
Harsh and his family kept hope despite repeating failures. In July 2017, Harsh was moved under the care of Dr. Suparno Chakrabarti And Dr. Sarita Jaiswal in Dharamshila Narayana Cancer Hospital in Delhi where he again underwent another Bone Marrow Transplant, this time donated by his father. The transplant took place on 13 December 2017. Another blow hit him and his family when post-transplant he caught serious lung infection and was subjected to heavy medications. Till 5th January 2018 this has already cost him another Rs. 40 lakhs. Unfortunately, the organs in his body did not accept the new cells causing high blood pressure, red blood cell clotting, TAM (Transplant Associated Microangiopathy), which has created life threatening situations.
The doctors at this renowned hospital of Delhi say that the only available option to treat Harsh is with doses of Eculizumab. According to Forbes, Eculizumab is the costliest medicine of the world, which is only available in the USA. 3 such vials form one dose and 4 such doses are required to be given in the coming month to Harsh. Being one of the costliest medicine, each vial costs Rs.5 lakhs and thus the total expected expenditure is supposed to exceed Rs. 65 Lakhs, which would include other medicines required to treat the Post Transplant Haemophagocystro Syndrome.
Harsh and his family have seen doctors throughout India, from Delhi in north to Vellore in South, from Mumbai and Pune in west to Bhopal and Lucknow in centre and north. They have spent far more than Rs. 1 crore in his treatment and have exhausted all their resources, both monetary and emotional, in the hope of reviving their beloved Harsh back.
Harsh is in a critical condition right now and needs everyone’s support. Anyone who knows Harsh can vouch for the genuineness of his medical case and his optimism. Although a monetary support wont be able to fill the emotional and physical trauma that he and his family have been through, it will definitely save Harsh’ life. It will give back his dreams of living a normal life away from the isolated space in his hospital where even his mother or sister cannot see him because of poor immunity and sanitisation; and of being a Movie Director.
**This campaign story can never portray the dire need and desperation Harsh and his family are going through. You can personally email Isha Nagchandi, Harsh’ sister at isha.nagchandi@gmail.com, or call __ on __ to know more.
Please help Harsh. Any amount of money shared by you will mean more than what you can imagine. "Whether it is worth a week’s cup of coffee or a cab ride", it will mean life and death to him! 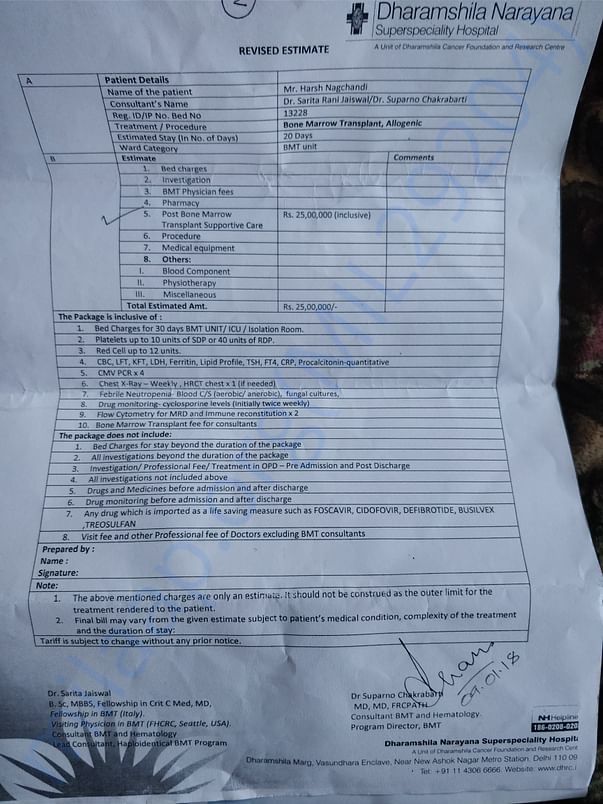 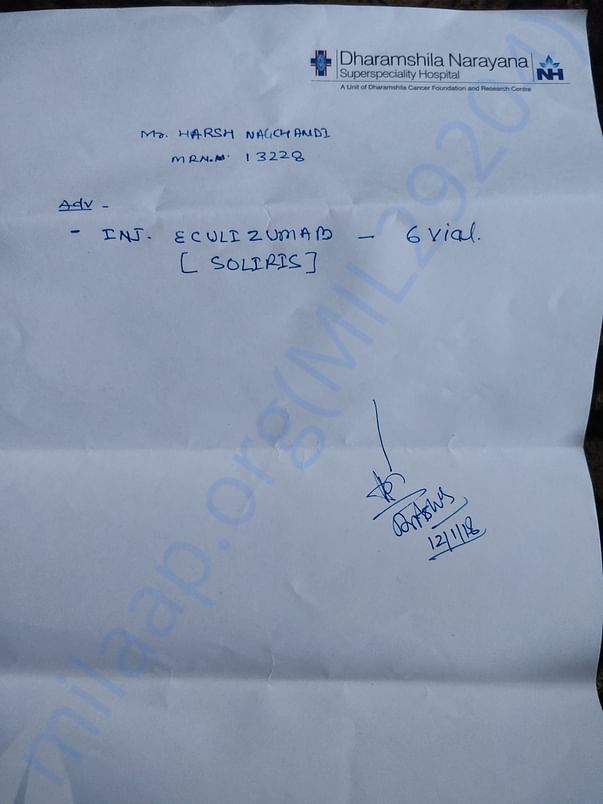 Ask for an update
Hello, all.

I'd like to begin by thanking you, every single one of you for all the aid that you've provided us with, in any way whatsoever.
Some of you have been friends of Harsh, and some complete strangers, but you helped nonetheless, and you deserve knowing what fate had in store for him.

Harsh, as much as it breaks our hearts to say it, is no longer with us. It was a long struggle, it was a hard fight, and he was as brave as a soldier on a battlefield.

He is in a better place, he is no more in pain, and being the kind, loving soul that he was, we know that the journey ahead is going to be pleasant for him.

Funds raised through this campaign will be utilized to settle the bills at the hospital.

We will post a detailed update once we get in touch with the family.

Again, thank you. You are what is good in this world.

Dear all,
We are extremely grateful for your prayers and support so far. I am short of words to express my gratefulness. But I am here with another request.
With your kind help and support, we were able to buy two doses of medicine for Harsh. But because of his extended stay in the hospital (75 days and counting) , the hospital bill poses another challenge. I have extended the campaign with the hope that all of you would share this campaign and help us reach new donors.
Thank you!
Dear Supporters,

Thank you for the overwhelming love and support that you have shown towards Harsh. he is fighting hard. Family and doctors are hopeful. The full picture will be clear only after the second dose is administered to him on Tuesday.

Would request you to please share this campaign further with your friends and family via WhatsApp, Facebook etc to help us in raising funds faster towards Harsh's treatment. Please do pray for his health and speedy recovery. Will keep you posted.

This campaign has stopped and can no longer accept donations.
$150 Million +
Raised on Milaap
Are you in need of financial support for medical or personal emergencies, or a social cause?
Start a fundraiser
Or
Know someone in need of funds for a medical emergency? Refer to us
Campaign organizer contact_mail
u
upasanaya2u
Beneficiary: Harsh Nagchandi info_outline
Report fundraiser

u
You are sending a message to
upasanaya2u
Go back 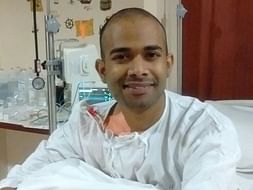