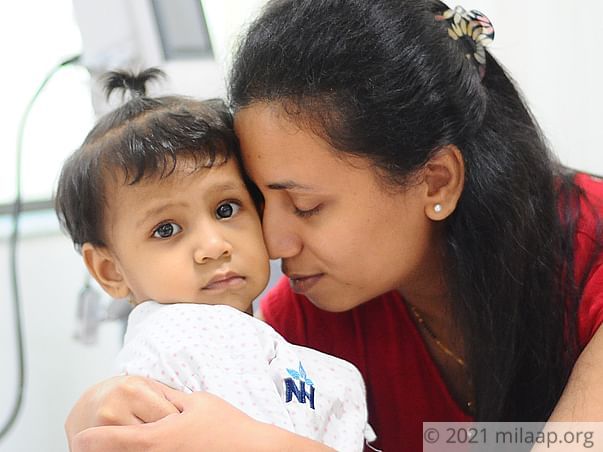 “When my contract in the Merchant Navy came to an end earlier this year, I considered it as a blessing in disguise. I had spent so much time away in the sea that I was rarely able to see my little girl, Snidhi after she was born. Although I knew that I'd have money problems for a while, I was happy to return home to be with her. I could watch her take her first steps and say her first words. But little did I know that her happy, cheerful face would be replaced with pain all of a sudden. My baby is suffering from such a deadly disease that she can bleed to death without a transplant. I can't imagine losing her"- Ganesh, Snidhi's father.

Baby Snidhi had just turned 1 and was learning to take her first steps. In July this year, she suddenly developed a fever and the parents noticed some red spots on her cheek. Antibiotics worked for her and she became fine in a week, much to the relief of her parents who took the spots for insect/mosquito bites.  Then after a few days, she fell down while playing and developed a swelling on her forehead.


"I wouldn’t have bothered much about a small injury but I noticed some visible blood clots near her eyes. It looked scary. When we took her to the to the doctor, I was horrified to know that there was black spotting inside her mouth too. Doctors told me she was bleeding internally,”- Sneha, Snidhi’s mother.

Baby Snidhi bleeds internally and through her gums, even a little delay in treatment can cost her life

Baby Snidhi has a very rare blood disease called aplastic anemia. It is a condition in which the bone marrow, responsible for producing blood cells, is damaged and the body can’t produce it anymore. During her first blood test, her platelet count had dropped to 7000. Right now, it is as low as 3000 (normal count is 1.5-4.5 lakhs per ml of blood). She keeps bleeding from her gums. Even a small injury can result in uncontrollable bleeding.

But what's even worse is the internal bleeding which can't be predicted as to when will that happen. The 1-year-old has been surviving on blood transfusions. Only an urgent bone marrow transplant to replace the damaged one can save her life.

“My baby had to stay in the hospital for a month. We stay just 15 minutes away from the hospital, but  we couldn’t even come home to bathe, fearing she might injure herself. We show her pictures and allow her to play with our phones to keep her distracted from the pain. We keep smiling when she's around, even with so much anguish inside, so that she doesn't sense something's wrong. Everyday I just pray that her pain goes away and she would be that bubbly daughter of mine again," Sneha, Snidhi's mother.

Ganesh has no income for a year and has spent everything he had, he can’t save his daughter without help

Ganesh worked in the Merchant Navy on a contract basis. Since the beginning of the year, he has been looking for a job, but without any success. He has already spent Rs 4 lakhs in just a month for Snidhi's treatment. As fate would have it, Ganesh's ancestral old house, which he could have sold for money towards the treatment, was demolished a few months ago. He has exhausted all his savings to save his baby girl, but nothing seems to be enough now.


“For the past 3 months whenever I have asked for help from friends and family to save my baby girl, all I have got to hear if that ‘You worked in the Merchant Navy. You must have a lot of money. Why do you need it?’ Had it been a matter of 5 or 10 lakhs, I would have somehow managed it. But, who will give me Rs 24 lakhs? I can’t even step out to work now. I can’t leave my baby alone. My wife is devastated, we need to be together in this. I don’t know if I will have to just sit back and watch my baby die. If that happens, probably Sneha and I will just breathe and not live. I have to save my baby at any cost,” - Ganesh.

1-year-old baby Snidhi has a very rare blood disease, aplastic anemia, that results in sudden internally bleeding. Only an urgent bone marrow transplant to replace the damaged one can save her life. With their savings exhausted, Snidhi's young parents are now racing against time to mobilize the required funds for her transplant.

Your support will save this baby’s life

Donate
0%
Be the first one to donate
Need Rs.2,400,000
Card, Netbanking, Cheque pickups
Or Donate using